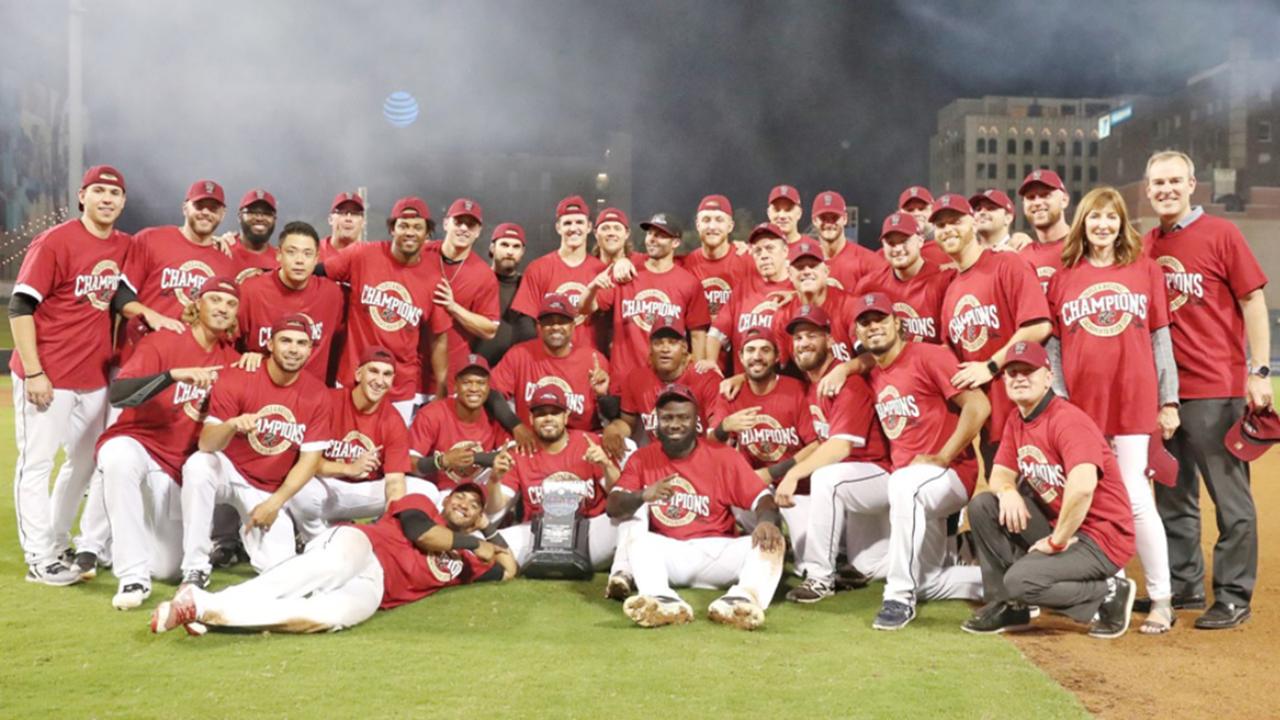 MEMPHIS, TENNESSEE - In a fitting finish to a decade of dominance by the San Francisco Giants organization, six Salem-Keizer Volcanoes alumni players, and a skipper from Salem helped the Sacramento River Cats top the Columbus Clippers 4-0 to clinch the Triple-A National Championship on September 17.

At the helm of the River Cats was skipper Dave Brundage, a graduate of Douglas McKay High School and Oregon State University. Brundage was a longtime minor league player before becoming a professional manager.

Heyward was the hero at the plate, powering in 2 RBI. Adon and Okert pitched scoreless eighth and ninth innings to close out the championship for SacTown.

The San Francisco Giants organization capped off the decade with 3 World Series Championships (2010, 2012, 2014), the 2016 National League Wild Card & now the Triple-A crown with multiple affiliate titles & playoff appearances, including the Volcanoes playoff-season in 2019.

"On behalf of Lisa, Mickey, myself and the entire Volcanoes organization, we send our most sincere congratulations to the Sacramento River Cats for this tremendous accomplishment. It also means so much seeing Dave Brundage, the pride of McKay High School, reach this achievement," said Jerry Walker, Volcanoes co-owner. "Every team part of the San Francisco Giants organization is a family: In some ways, because literally there are so many players and coaches who make their respective career journeys in the Giants organization. Also, there is a deeper bond that has grown because of all the championships that have been won under the Giants shield."

The Volcanoes, coming off an inspired 2019 playoff season are already planning 2020 events, and now just added to the list will be a special tribute to the Triple-A National Champions, said Mitche Graf, Volcanoes president.

"Anyone who wants to see the bond that a community has with a sports team just needs to look at Minor League Baseball. We were fielding calls and texts tonight from throughout the organization, sharing how proud they are of Dave Brundage, the Volcanoes alumni with Sacramento and the entire organization. Winning has an incredible way of bringing everyone together."

Mickey Walker, Volcanoes special advisor to ownership, who has spent every day of his life with the Volcanoes, noted that in baseball, the next championship is never certain, which is why the entire Volcanoes community should take a moment to celebrate this latest organizational achievement.

"It's such a powerful concept, but one we share with our fans every game at Volcanoes Stadium: We all come together to see a professional baseball game - to see players who are in the most elite percentile of anyone playing the game. From the communities of Salem and Keizer and the surrounding areas, we have seen players win World Championships and Minor League Championships. If that isn't the embodiment of the American Dream, I don't what is."

The San Francisco Giants organization capped off the decade with 3 World Series Championships (2010, 2012, 2014). This story was not subject to the approval of the National Association of Professional Baseball Leagues or its clubs.