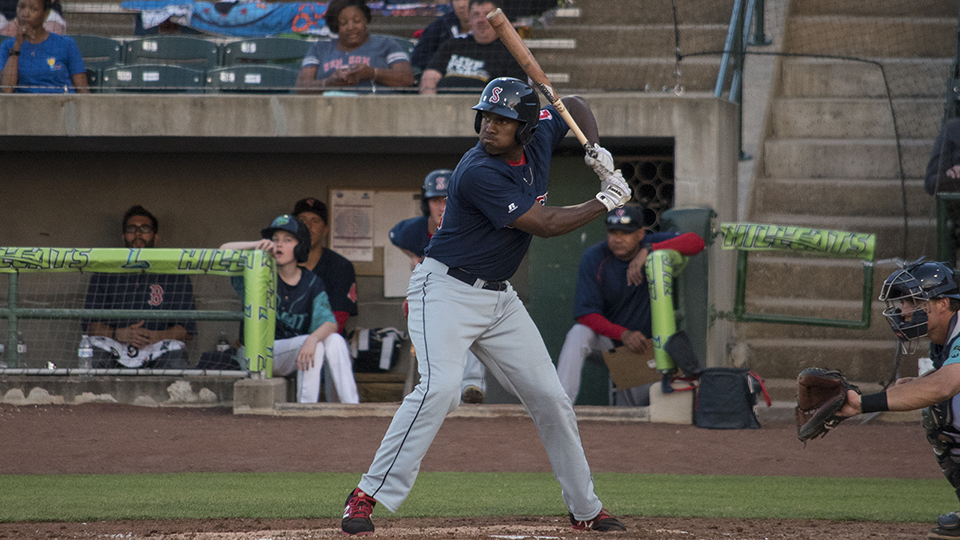 Ockimey has set the Carolina League on fire in his first taste of the league. (Lindsay Carico)

Ockimey, a 21-year-old first baseman from Philadelphia, Pennsylvania, batted .447 with a .521 on-base percentage and .658 slugging percentage in his first ten games. In going 17-for-38 to start the year, he cracked three doubles, a triple, and a three-run, opposite-field homer. He also scored eight runs, amassed eight runs batted in, and drew eight walks.

As of April 18, Ockimey is leading the Carolina League in on-base percentage with a .509 mark, and is tied for the league lead in sacrifice flies with two. He is also among the league leaders in several other categories, with a .429 batting average (2nd), 18 hits (2nd), nine walks (t-2nd), 10 RBI (t-3rd) and a .643 slugging percentage (4th). His 10 RBI are tied with Josh Tobias for the team lead.

Ockimey spent the entire 2016 with the low-A Greenville Drive, batting .226 with 62 RBI and 18 homers (fourth-most among Red Sox minor leaguers). His 88 walks drawn led the South Atlantic League. He was named a midseason All-Star in the SAL, and led Greenville in homers, walks, games played (117) and doubles (25).

In 2015, Ockimey was a New York-Penn League midseason All-Star, and tied for fourth in the NYPL with 38 RBI. He led the Lowell Spinners in RBI, and batted .266 with four homers and 13 doubles in 56 games. Ockimey made his professional debut in 2014 for the Gulf Coast League Red Sox, playing in 36 GCL games.

Ockimey attended SS. Neumann & Goretti Catholic (PA) High School, where his uniform number (30) was retired. As a senior, he hit .411 with 13 HR and 100 RBI in H.S., and led the school to three Catholic League titles. He was named CL Blue Division MVP as a senior, and was committed to play for Indiana University before signing with the Red Sox, who drafted him in the fifth round (164th overall) of the 2014 MLB Amateur Draft.

Ockimey is the first Red Sox to earn CL Player of the Week honors since Michael Kopech was named Pitcher of the Week for August 22-28, 2016, and the first hitter to do it since Yoan Moncada got the nod for the week of May 2-8, 2016.