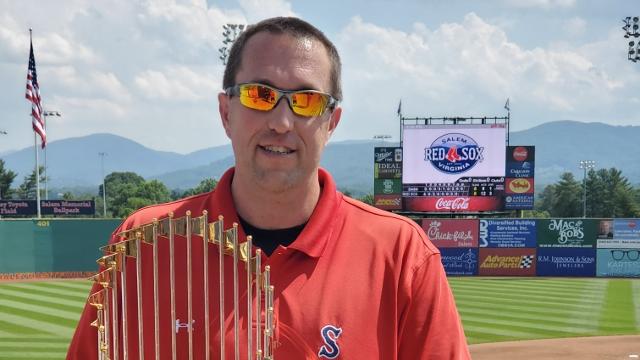 Allen Lawrence has been named General Manager of the Salem Red Sox after joining the club in 2002. (Cam Moist)

Allen epitomizes the community based, minor league General Manager. He grew up in the Roanoke Valley and graduated from Roanoke's North Cross High School in 1996, before studying and graduating from Elon University in 2000. Allen first worked for the Salem ball club as a game day employee during his time as a high school and college student. He returned to the club as an intern in 2002, and since then he has touched just about every nook and cranny of the Club, distinguishing himself at every stop. The depth and breadth of Allen's experience working in Minor League Baseball is unparalleled, having served the club in a variety of different capacities including Food and Beverage Director, Director of Stadium Operations, Vice President of Sales, Assistant General Manager, and Interim General Manager. Enormously respected by everyone he comes into contact with throughout the community, he has won countless plaudits and accolades during his nearly 20 year career. Most recently this past year he was named one of the "Ten Most Outstanding Young Professionals in the Community."

Allen and his wife Jeanne make their home in Roanoke with their five year old son Parker and their two year old son Connor. "Allen embodies the full meaning and spirit of a community oriented GM. He has lived in the Roanoke Valley almost his entire life and has dedicated his professional career to the Salem franchise, working tirelessly to make the community better along the way," said Jeff White, Managing Director of the Salem Red Sox. "His personal qualities endear him to his staff, customers, sponsors, and business partners. On my most recent trip to Salem people went out of their way to praise Allen, which was not surprising to me because I hear that praise every time I speak to a member of Roanoke Valley community."

"I am excited to build upon the decade long success that we have achieved in the community since the affiliation between the Boston Red Sox and the Salem club began back in 2009," said Lawrence. "I look forward to leading the club as it takes the next steps in that progression, and appreciate the confidence and respect our ownership group has displayed in providing me with this incredible opportunity."