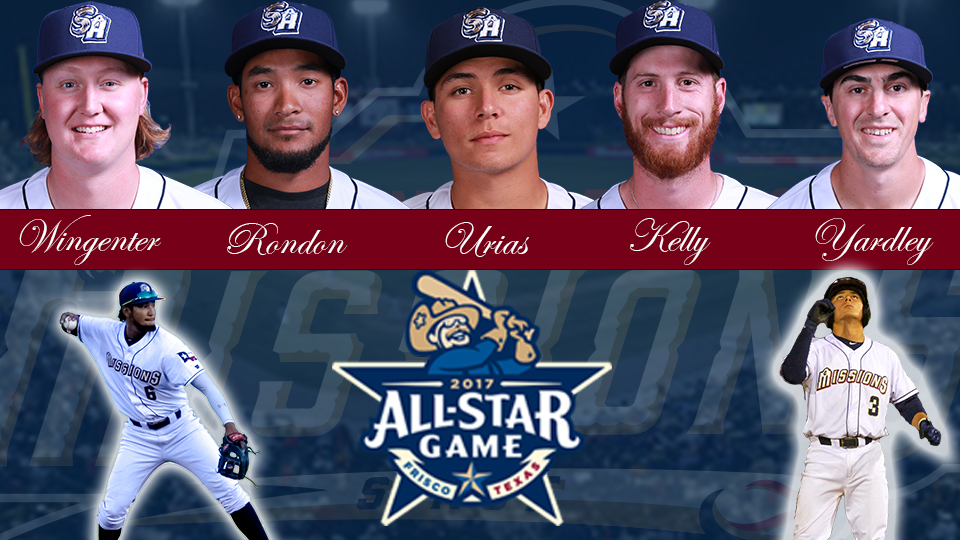 The Missions will be sending five players to Frisco, with Luis Urias being named as the starting shortstop for the South Division. Infielder Jose Rondon and right-handers Michael Kelly, Trey Wingenter and Eric Yardley were also selected to the South Stars' roster.

Rondon, who was named a TL Mid-Season All-Star in 2016, is one of the hottest hitters in the TL. In 12 games this month, Rondon is batting .460 (23-for-50) with eight doubles, nine RBI and nine runs scored. During June, Rondon leads the league in AVG, hits and doubles, in addition to being tied for the league lead in both extra-base hits and total bases (31). Rondon will serve as the South's utility man.

Wingenter and Yardley have both been key cogs in the Missions' bullpen this season. In 22 appearances, Wingenter is 2-0 with a 2.05 ERA, four saves a K:BB of 30:9 over 22 innings. Yardley has closed out four games as well for San Antonio this season, while posting a near identical K:BB of 30:8. Opponents are hitting just .225 off the side-armer.

San Antonio enters tonight's series opener in Frisco with a four-game lead over Midland with just six left in the first half. The Missions will return to The Wolff on Thursday, June 22 to open up a four-game set with the RockHounds.