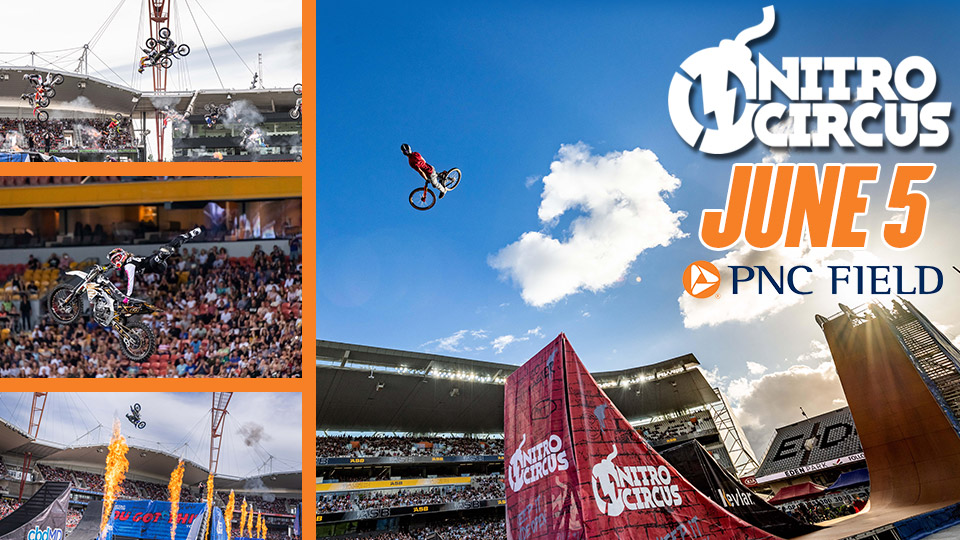 MOOSIC, PA (November 12, 2019) - When the spring temperatures heat up, so will the action as Nitro Circus is headed across North America with its explosive 'You Got This' tour. Nitro Circus has announced a tour stop at PNC Field on Friday, June 5, 2020, and the only way to truly experience it is live. A special ticket pre-sale begins this Friday, November 15, with a general ticket sale beginning on December 6.

Witness Nitro's thrill-loving daredevils brave the world's largest jumps - including the world-renowned Giganta ramp, one of the largest action sports ramps in the world -- as they launch close to five stories into the air. Be there live when they attempt the craziest stunts imaginable on contraptions you never imagine could fly! With no roof there are no limits. These real-life action heroes are sure to inspire fans of all ages as they push the limits with record-breaking attempts every night. This is the show of the year you cannot miss!

Grab your seats with the exclusive pre-sale this Friday by signing up at NitroCircus.com. For more information on the show or other upcoming events at PNC Field, call (570) 969-BALL.

Nitro Circus, a global sports entertainment leader, creates electrifying live events and unbelievable original content that at once exhilarates, captivates and inspires thrill-seeking fans worldwide. Co-founded in 2003 by iconic superstar Travis Pastrana, Nitro Circus has since grown into a multi-platform phenomenon producing hit television programming, critically acclaimed documentaries and innovative digital offerings. That success gave rise to the Nitro Circus Live tour. Created in 2010, Nitro Circus has since traveled across the planet, playing to sold-out stadiums on five continents. The company introduced an innovative breakthrough in 2016 with the debut of Nitro World Games, completely rebooting action sports competition in the process and then raised the bar once again in 2018 with Nitro Rallycross, a rejuvenation of four-wheel motorsports. With over three million tickets sold to date, television programming that has aired in over 60 countries, more than 25 million engaged fans across its social media platforms and a burgeoning consumer products business, Nitro Circus is at the forefront of sports and entertainment. For more information visit www.nitrocircus.com.