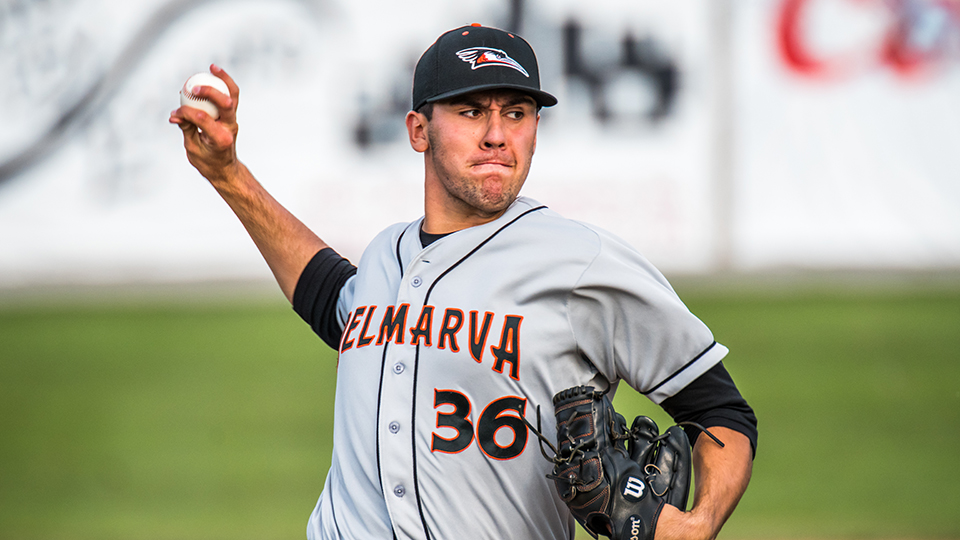 As the year winds down, the MiLB.com staff is looking back at the best teams, farm system, games and individual performances from a memorable 2019 Minor League season. For the first installment of the series, we've combed through every domestic level of the Minors to select the top 10 teams based on on-field performance and the prospect talent that each brought to the table. So, without further adieu, we present the 10 best teams from 2019:

Class A Delmarva manager Kyle Moore knows the 2019 season is one that's going to be hard to top in his Minor League coaching career. On its face, Moore's Shorebirds were a force to be reckoned with from beginning to end in the South Atlantic League. Stellar pitching led the way for Delmarva, which won 90 games and finished with the Minors' highest full-season winning percentage at .652. No, the Shorebirds did not capture a championship, but they consistently won games and held down the opposition en route to earning the top spot on this list.

"I think it was just how hard the guys played and how we stuck with it, even after the All-Star break -- it was such a young group of guys," Moore said. "I think with a group in their first year of pro ball, the staff did a great job keeping these guys going all year because we started off hot. But the Washington Nationals will tell you it's not how you start, and we ended up finishing good, too. We went through July and August and the kids got better."

It was an all-around team effort, but what fueled the Shorebirds all year long was an elite pitching staff that led the circuit in a host of categories, including ERA (3.00) and shutouts (20). In his first full season as a pro, second-ranked Orioles prospect Grayson Rodriguez not only earned Sally League All-Star honors, but a spot in the Futures Game in Cleveland. For the season, he maintained a 2.68 ERA and struck out 129 hitters over 94 innings. He shared Pitcher of the Year honors in the organization with Michael Baumann.

"[In the first half], we had good college experience mixed with a good pitching coach. Justin Ramsey did a great job all year -- he did a helluva job," Moore said. "For me, the second half was more about true, down-on-the-farm development guys. We had some big holes, they needed big-time work with their deliveries and Justin Ramsey did a great job with those guys, too. We had some guys in the second half putting themselves on the map that didn't even make the team out of spring.

"We had the big names. Rodriguez, Gray Fenter absolutely had the year of his life when he needed it. ... The starting pitching was great wire to wire. The job Justin Ramsey did with the bullpen was phenomenal."

Offensively, Seamus Curran finished sixth in the league with 17 homers, while O's No. 14 prospect Adam Hall compiled a .298/.385/.395 slash line and was a constant presence on base. He played only 12 games with Delmarva, but the Orioles' new top prospect, catcher Adley Rutschman, joined the team late in the year and chipped in two homers and eight RBIs.

Although they ultimately fell short of winning it all, the Shorebirds and Moore had plenty to be proud of in an elite season.

"It was by far the best year I've had as a coach, without a doubt," Moore said. "We won, I had my family there with me the whole time, we went to the playoffs. ... It's going to be hard to top this one."

It had been more than 40 years since Class A Advanced Visalia won a California League championship, but that all changed when top D-backs prospect Alek Thomas ripped a walk-off double on Sept. 14 to give the Rawhide their first title since 1978.

That's where things finished for Visalia, but it all started with a first-half division crown and continued with the league's highest regular-season win total (83). Tied for the second-best ERA on the circuit, the pitching held its own in the hitter-friendly environs. Josh Green shined before a promotion to Double-A with a 9-1 record, 1.73 ERA and 1.05 WHIP in 14 starts.

The Rawhide didn't rely on power by any means, but Camden Duzenack stood out with a team-best 18 homers, while L.T. Tolbert kept the pace with an .818 OPS.

A talented group in all facets of the game, the Class A Advanced Blue Rocks finished 11.5 games ahead in the Carolina League North Division and never looked back before winning the crown in a five-game series with Fayetteville.

Brady Singer (1.87 ERA), Daniel Lynch (3.10 ERA, 77 strikeouts) and Kris Bubic (2.30 ERA, 110 strikeouts) -- three of the Royals' top six prospects -- all saw time on the mound with Wilmington and anchored a staff that tied for the league lead with a 3.00 ERA and ranked second with 16 shutouts. No. 16 prospect Jonathan Bowlan etched his name in the history books with a no-hitter during a nine-strikeout performance on July 15.

The powerful Brewer Hicklen went off in the second half of the season with 12 roundtrippers, including a three-homer effort, to help solidify an offense that did just enough to win a title.

The Double-A Biscuits were hungry for success and filled up by winning the Southern League North Division in both halves of the campaign.

Although he made only eight appearances for Montgomery, No. 2 Rays prospect Brendan McKay came out of the gates firing with a 1.30 ERA and 62 strikeouts over 41 2/3 innings. Kenny Rosenberg and Josh Fleming held down the rotation for the rest of the year, each logging over 125 frames.

Rays No. 11 prospect Josh Lowe tapped into some power and mashed 18 homers, while Miles Mastrobuoni led the team with a .299 average. Third-ranked Vidal Brujan joined the Biscuits during the summer and posted a .728 OPS over his final 55 contests.

The Class A Short Season Hops have become something of a dynasty in the Northwest League, capturing their third title in seven years. It followed a strong regular season in which they post the circuit's best record at 48-28.

Pitching kept Hillsboro ahead of the pack, with the team putting up the best ERA (2.87) and WHIP (1.18) while racking up a circuit-leading 11 shutouts. Deyni Olivero ranked first among qualified pitchers with a 2.09 ERA and second with a 1.08 WHIP across 64 2/3 innings.

Second-ranked Arizona prospect Kristian Robinson flashed all of his tools in Hillsboro and tied for second in the league with nine homers before getting a cup of coffee in the Midwest League.

The only Rookie-level team to make this list, the Giants compiled a stateside-best .768 winning percentage, taking their division by an impressive 12 games.

Third-ranked Giants prospect Marco Luciano stood out by hitting a team-best .322 while finishing fourth in the Arizona League with a 1.055 OPS in his first professional season. Luis Toribio chipped in 21 extra-base hits and a .436 on-base percentage.

Their strong seasons almost overshadowed the pitching, which ended the summer with the AZL's best ERA at 3.28.

Although Hurricane Dorian prevented the chance to play for the Florida State League title, the Stone Crabs recorded the most wins in the league with 82.

Wander Franco, MLB.com's top overall prospect, joined the club at the end of June and whacked his way through the Class A Advanced level with a .339 average and an .872 OPS. Rays No. 7 prospect Ronaldo Hernandez was a stalwart behind the plate and smacked nine long balls.

It was fitting for the International League's best team in the regular season [winning the West Division by 15 games) to capture the championship as the Triple-A Clippers walked away with the 11th Governors' Cup in club history.

Seventh-ranked Indians prospect Bobby Bradley got a cup of coffee with in the Majors this year, but he was in vintage form while wearing a Columbus uniform. He led the IL with 33 dingers and was third with a .567 slugging percentage. Cleveland's No. 16 prospect Daniel Johnson was a different kind of threat at the dish, batting.307 with a .371 OBP.

In a year that was not friendly to pitchers at the Triple-A level, Michael Peoples closed out the season with the fourth-best ERA on the circuit at 3.98.

A 73-win team during the regular season, the River Cats took it all in the Pacific Coast League and topped the Clippers to claim the Triple-A National Championship.

After a stint with Double-A Richmond, Giants No. 21 prospect Chris Shaw rejoined Sacramento at the end of June and warmed favorably to the PCL. He bashed 21 homers and ended up with a .592 slugging percentage. Offseason acquisition Mike Gerber led the team with 26 long balls.

Caleb Baragar joined Sacramento for the postseason and ended up playing an integral role, winning MVP honors in the Triple-A title game.

Rounding out the list is a team that ran roughshod over the Pioneer League with an incredible 54 victories [tied for the most in league history] and .711 winning percentage.

The offense carried the load for the Dodgers' Rookie Advanced affiliate with 86 homers and .876 OPS, both of which led the league. Andy Pages was in the thick of it with 19 dingers and 55 RBIs in 63 games.

On the mound, Jeronimo Castro ended the year with a 3.62 ERA and helped the team put together a 3.92 mark.