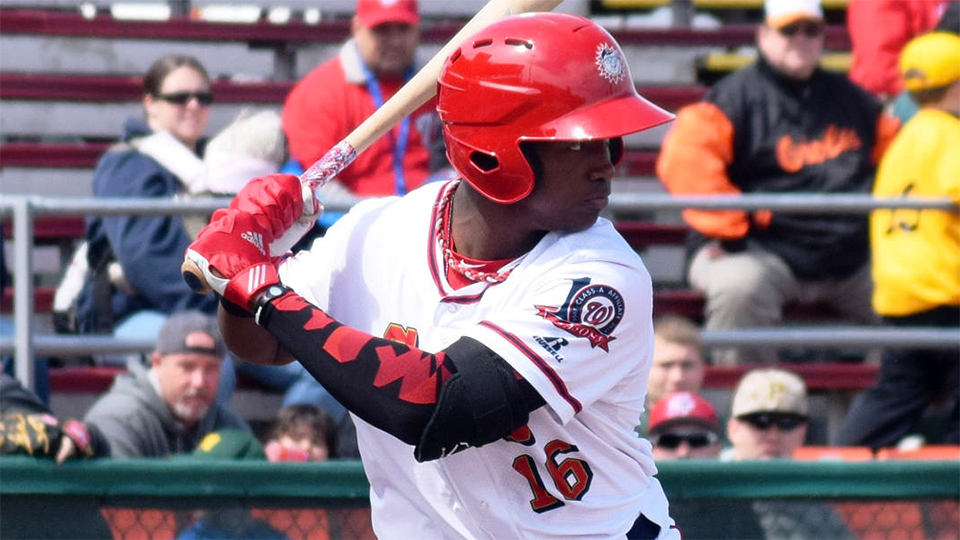 Some of the best young talent in the prospect world is headed to Lexington, Kentucky.

Rockies top prospect Brendan Rodgers, Nationals No. 3 prospect Victor Robles and Giants No. 3 prospect Phil Bickford are just some of the big names on the South Atlantic League Northern and Southern Division All-Star rosters, released Tuesday. This year's Sally League version of the midsummer classic will be held at the Legends' home of Whitaker Bank Ballpark on June 21.

Robles, MLB.com's No. 58 overall prospect, has been one of the circuit's most exciting players in his first full professional season, hitting .316/.413/.475 with five homers, three triples, seven doubles, 25 RBIs and 16 steals in 49 games with Class A Hagerstown. The 19-year-old will bring his offensive skill set, along with his impressive defensive tools, as the Northern Division's starting center fielder.

The Hagerstown Suns outfielder is joined on the Northern Division roster by fellow 19-year-old Ke'Bryan Hayes, who checks in as the No. 99 prospect in baseball. The 2015 first-rounder is listed on the All-Star roster as a utility infielder but plies his trade at third base. Hayes owns a .282/.332/.412 line with five homers, eight doubles, 29 RBIs and four steals in 47 games for West Virginia. The Pirates will have another exciting prospect representing the system in right-handed hurler Mitch Keller, who is 4-3 with a 1.89 ERA, 64 strikeouts and only five walks in 57 innings for the Power.

Representing Asheville on the Southern Division roster, Rodgers is the South Atlantic League's highest-ranked prospect at No. 10 overall, according to MLB.com. Also 19, the third overall pick in last year's Draft has lived up to his billing in his first full season with a .284/.347/.494 line, eight homers, 13 doubles and 34 RBIs in 42 games with the Tourists. He is listed as the Southern League starting shortstop for what will be his first professional All-Star Game.

Starting as designated hitter will be breakout Red Sox prospect Josh Ockimey, who leads the circuit with a .437 on-base percentage and .975 OPS. A fifth-round pick in 2015, Boston's No. 16 prospect is tied for second with nine homers and places third with a .538 slugging percentage.

On the pitching side, Bickford might be the most notable name after being taken 18th overall by the Giants last June. The 20-year-old right-hander owns a 2.63 ERA with 57 strikeouts and 13 walks in 48 innings for Augusta. His 10.7 K/9 ranks third in the Sally League, while his 2.36 FIP is fourth-best in the circuit.

The complete Northern Division and Southern Division All-Star rosters can be found at those links. Rosters will be updated as additions and subtractions are made.

For mobile users, go to www.milb.com/asg for info.