No. 15 Rangers prospect hit .609 with five homers for Hickory 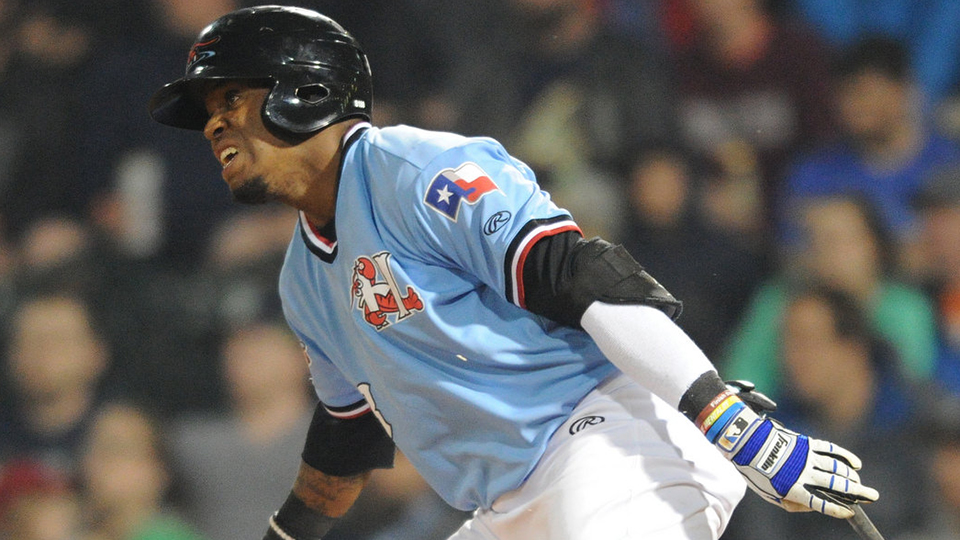 A quick guess on who had the best offensive week in baseball would probably lead to a few names in the Nationals system. The big league club reached double-digit runs four times, including 23 against the Mets on Sunday, and Ryan Zimmerman led the Majors with 30 total bases last week. Meanwhile, Washington's Class A affiliate in Hagerstown set a South Atlantic League record with 30 hits in a 22-4 win, and three-homer-hitter Carter Kieboom would make a perfectly reasonable candidate as well.

Even those performances don't quite stack up to the week put together by Yanio Perez at Class A Hickory, however.

The Rangers' No. 15 prospect led all of baseball with a 1.304 slugging percentage and 1.958 OPS over six games from April 24-30 to win South Atlantic League Offensive Player of the Week honors and highlight the latest group of Minor League winners. He tied among leaders in both the Majors and Minors with 14 hits, five homers and 30 total bases in 23 at-bats over that span.

Perez was especially good over the final three days of the week, going 8-for-10 with four homers, nine RBIs, two walks and only one strikeout against Columbia. The 21-year-old right-handed slugger notched his first career multi-homer game with two blasts Saturday in a 9-8, 10-inning win over the Fireflies.

"He's been solid for us from the beginning, but obviously nothing like that Columbia series," Crawdads manager Spike Owen said Monday. "He had some competitive at-bats, but this week something clicked. He's hitting like a guy with a lot of confidence, and that always helps. But it's not just the hits and the home runs. Everything he's hitting, he's hitting really hard."

Owen added that Perez's results have come from his work with hitting coach Kenny Hook, who's been helping him take some effort out of swing by lowering his leg kick and keeping the load more on his back side. According to the manager, the tweaks have helped Perez pick up balls better as they enter the zone as well as aided his ability to pick up breaking balls.

The Rangers signed the Cuba native to a $1.1 million bonus last September after he had defected in the summer of 2015. Before that, he played in the Cuban Nacional Series in 2014 as an 18-year-old, hitting .265/.333/.347 with two homers over 80 games. However, he showed above-average power and run tools in his workouts in front of scouts, leading to his spot at No. 14 in MLB.com's international prospect rankings and his eventual seven-digit signing.

Those skills translated quickly in Perez's first taste of stateside pro ball last month. His .453 on-base percentage and 1.095 OPS through 23 games were both tops among Sally League hitters in April, while his .642 slugging percentage and six homers placed second.

"He knows he can play professional baseball here now, that's for sure," Owen said. "With the level of success he's had, he should feel great about himself. His attitude is certainly great, and he comes to the park every day with a smile. With the club we have and the players who are around him, they've helped make the transition easier. He's one of the guys, and we're all really happy he's here."

In a way, Perez's full-season start is reminiscent of No. 12 Rangers prospect Andy Ibanez last season. Ibanez, another Cuban signing, hit .402/.479/.659 in April and jumped straight to Double-A Frisco in June. Some questions remain about Perez before discussion of such a promotion can begin, particularly on defense. Perez has split time between right field, left, first base and third in his first month. (Ibanez played exclusively at second base before making the jump.) Owen, however, said moving Perez around the field speaks to his versatility rather than his inability to stick in any one spot, and as a manager, he enjoys getting the chance to keep the slugger's bat in the lineup, however he can.

"We see some good pitching here -- guys who throw hard, some who can really spin it," Owen said. "The more at-bats he gets, the more he'll see all of that. He's certainly being challenged here right now, though. But I hope he stays this hot all year for us. He's certainly shown us what he's capable of."

Here are the rest of the Minor League Offensive Players of the Week for April 24-30: