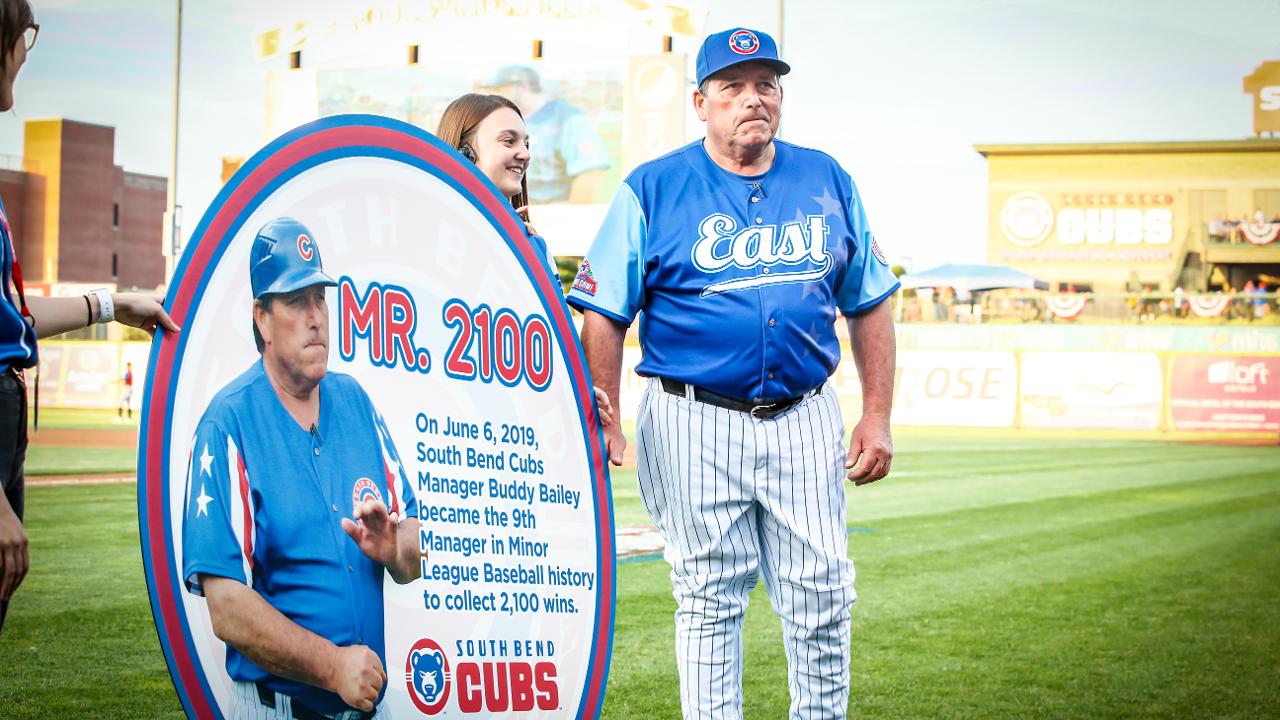 SOUTH BEND, IN - Ahead of the Cubs Convention in Chicago this weekend, the Chicago Cubs have announced their Minor League Coordinators and coaching staffs for the 2020 season. Buddy Bailey returns to South Bend after guiding the team to their first Midwest League Championship since 2005 and first as a Chicago Cubs affiliate in 2019.

Buddy Bailey returns for his second year as Manager of the South Bend Cubs. Bailey, who is set to begin his 32nd season as a manager, has been in the Cubs organization since 2006. By level, he has managed at former Advanced-A Daytona, Triple-A Iowa, Double-A Tennessee, Advanced-A Myrtle Beach, and South Bend. Bailey's coaching career began in 1983 with Pulaski in the Appalachian League.

Overall, Bailey's record as a Manager since 1983 is 2152-1983 and is currently the winningest active manager in all of Minor League Baseball. The former MLB draft pick of the Atlanta Braves currently ranks 6th all-time in wins and just 33 wins away from 4th all-time.

Prior to joining the Cubs organization, Bailey played four seasons in the Braves system. As a coach and manager, he has also spent time with Atlanta and the Boston Red Sox. His stop with Boston included experience in a Major League clubhouse. In 2000, Bailey called Fenway Park home and served as the bench coach of the Red Sox.

Dan Puente joins the Chicago Cubs organization and will be the hitting coach for South Bend in 2020. Puente has been a hitting and catching instructor at Elite Baseball Training since 2012, a technology-infused baseball and softball instructional company created by the Cubs Director of Hitting Justin Stone. Puente also served as an associate scout for the Houston Astros and from 2008-12 was the Manager of Youth Baseball Initiatives for the Chicago White Sox. A former catcher, he was selected by Baltimore in the 12th round of the 2004 Draft and played two minor league seasons.

Matt Hussey begins his third season as a trainer in the Cubs organization and first season with South Bend after spending 2019 with Rookie-League Mesa.

The South Bend Cubs are the Class A minor league affiliate of the 2016 World Series Champion Chicago Cubs. Over the past 32 seasons, the team has won four Midwest League titles, most recently in 2019, and has captured eight division titles. In 2019, the South Bend Cubs hosted the Midwest League All-Star Game. In June 2017, Four Winds Field, home of the South Bend Cubs, was voted Best Class A ballpark in the country by Ballpark Digest. In 2015 the team was named Ballpark Digest's Team of the Year and received the John H. Johnson President's Award, the highest award in minor league baseball. The team is owned and operated by Swing-Batter-Swing, LLC whose principal shareholder is Andrew T. Berlin of Chicago, Ill. More information is available at www.SouthBendCubs.com.