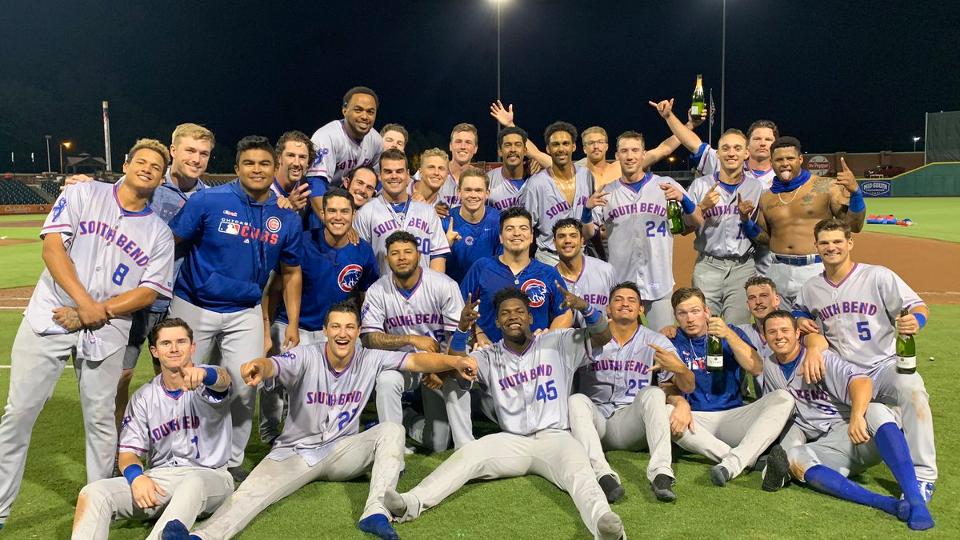 Bowling Green, KY: For the first time since 2013, the South Bend franchise has won a playoff series in the Midwest League Postseason. Also for the first time this year, the South Bend Cubs came back to win a game after trailing after eight innings. Tonight's 7-4 victory over the Bowling Green Hot Rods finished off a sweep of a division rival and a spot in the Eastern Division finals.

The Cubs got it done on Thursday night with a shutdown bullpen performance and a miraculous comeback in the 9th inning. Similar to each of the past four games played between both sides this week, game two of round one started neck-and-neck. Last night's game finished 2-1, and it looked like the clubs were headed towards that point again.

Bowling Green struck first with two runs against starter Riley Thompson in the bottom of the 2nd. Thompson fought through jams and finished his night with 4.1 innings and three earned runs allowed. The right-hander from Louisville struck out three batters.

Both teams put together really solid at-bats in the middle innings. The Cubs came back to tie the game for the first time in the top of the 4th inning against Hot Rods starter Alan Strong. Strong was not getting many close calls in the strike zone, so that led to Bowling Green Pitching Coach Brian Reith being ejected for arguing balls and strikes.

After the Cubs tied the game in both the 4th and 5th innings, the Hot Rods had an answer in each of the next two half innings to take the lead right back. The game then remained at a standstill until the top of the 9th, when South Bend began their big comeback.

The comeback was set up by both Brandon Hughes and Brendan King on the mound. Hughes, who has been dominant against the Bowling Green lefties this week, fired 1.2 innings of shutout baseball. King added to his solid week by pitching three scoreless frames.

King ended up being the winning pitcher because of the comeback effort. The rally was jump started by an Andy Weber double into the left-center field gap. Weber thought about third base, but did not risk it. Brennen Davis then singled, then that was followed by a Nelson Maldonado infield single and throwing error by pitcher Joel Peguero. The hit and error scored Weber.

Following the single was Jake Slaughter, who brought in a run on a fielder's choice. Cole Roederer then singled home Maldonado. Finally, a bases loaded walk to Fidel Mejia capped the four run rally.

In the bottom of the 9th, King worked a 1-2-3 inning and it was celebration time for South Bend. They were provided with champagne on the field and the Cubs were all smiles getting onto the bus.

With the sweep, the Cubs will enjoy an off day tomorrow before game one of round two on Saturday night at Four Winds Field. South Bend will meet the winner of the Great Lakes and Lake County series. First pitch on Saturday night is set for 7:05 PM. Tickets are on sale now at SouthBendCubs.com.