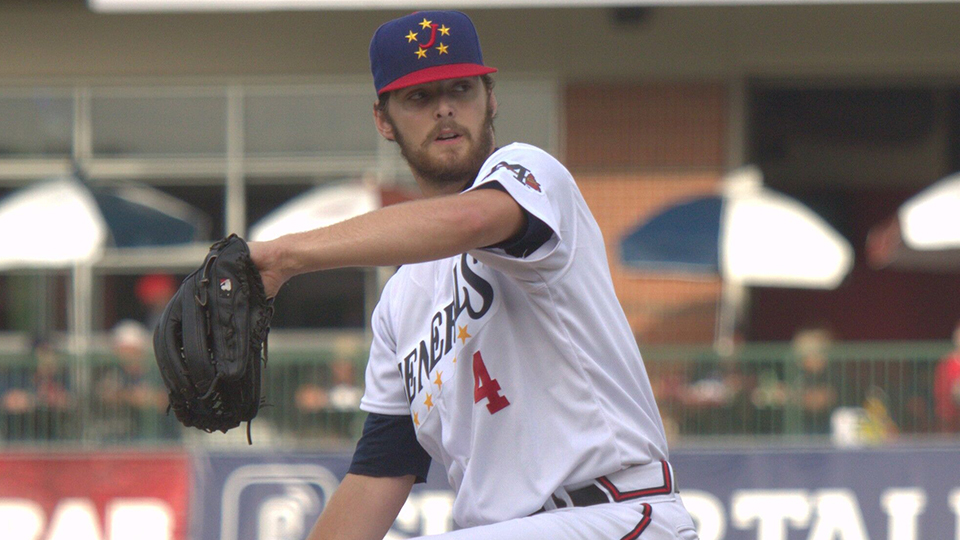 The future is now for Ian Anderson.

Hours after he was named to the All-Star Futures Game, the third-ranked Braves prospect tied the team record with a career-high 14 strikeouts over seven innings as Double-A Mississippi no-hit Jackson, 2-0, on Friday night at Trustmark Park.

The 21-year-old right-hander equaled the M-Braves' single-game mark set by Tommy Hanson on June 25, 2008, in a no-hitter against Birmingham. MLB.com's No. 26 overall prospect struck out the side in the first and fifth, posted two punchouts in the second, fourth and seventh and one each in the third and sixth.

"It goes with my game," he said. "I always put an emphasis on the strikeouts, though I'd like to cut down on the walks. The main thing is to execute pitches.

"I don't think I've ever thrown a no-hitter, definitely not a complete game. Tonight, it was good to see Jeremy [Walker] come in; he's been shutdown all year. There was no one I had more confidence in to close it out and get it done."

Anderson walked two and hit a batter and the Braves committed two errors, but Jackson could not capitalize -- only two Generals reached second base.

After opening the game with a four-pitch punchout of Ben DeLuzio, MLB.com's No. 26 overall prospect walked D-backs No. 4 prospect Daulton Varsho on four pitches before fanning 14th-ranked Drew Ellis and 16th-ranked Pavin Smith. Anderson opened the second with back-to-back strikeouts, but Jeffrey Baez reached on an error by third baseman Riley Unroe. Galli Cribbs Jr. jumped on the next pitch and flied to left to end the frame.

Top Braves prospect Cristian Pache delivered an RBI double in the third, plating 25th-ranked Ray-Patrick Didder, who was plunked by Jackson starter Bo Takahashi (5-4) leading off the frame and moved to second on Anderson's sacrifice.

"It was a close game and every run counts," he said. "[The bunt] gave us a boost and the team executed. It's always great when teammates pick you up."

Anderson (6-5) registered 1-2-3 innings in the third and fourth. He opened the fifth with a pair of whiffs, walked Cribbs, then struck out Takahashi. In the sixth, DeLuzio was hit by a pitch before being erased on a fielder's choice by Varsho. Ellis struck out and Varsho stole second before the 2016 first-round pick retired Smith on an inning-ending grounder to short.

Pache launched a solo homer in the fifth to provide some breathing room. MLB.com's No. 14 overall prospect will join Anderson at the Futures Game next month in Cleveland.

"I knew about [having a no-hitter] in the fifth," he said. "I felt this was going to be a pretty special game. To get three strikeouts in the fifth, I was thinking, 'I can do something here.'"

With the no-hitter nine outs away, the seventh opened inauspiciously with an error by Didder at shortstop that allowed Jamie Westbrook to reach. Anderson, however, proceeded to strike out top D-backs prospect Jazz Chisholm for the third time and got Baez on a 3-2 pitch for his 14th punchout as Westbrook stole second. Cribbs grounded to second to cap Anderson's night after 103 pitches, 66 for strikes.

"I definitely wanted to put an emphasis on the last inning," he said. "You feel better throwing seven innings, not 6 1/3 or 6 2/3. I just had to bear down and keep competing.

"It really didn't come up, but after I came out, I was breaking the rules," Anderson said, referencing the unwritten canon of not mentioning an unfolding no-hitter. "In the eighth, I was talking to anyone, everyone."

Walker, the Braves' 27th-ranked prospect, fanned two over the final two innings to nail down the milestone. The right-hander had a strikeout to open the eighth and two ground-ball outs to finish the frame. In the ninth, two grounders and a four-pitch whiff of Westbrook wrapped Walker's sixth save and the M-Braves' first no-hit effort since Aug. 2, 2010, when Julio Teheran and Ty'Relle Harris whitewashed Mobile, 2-0.