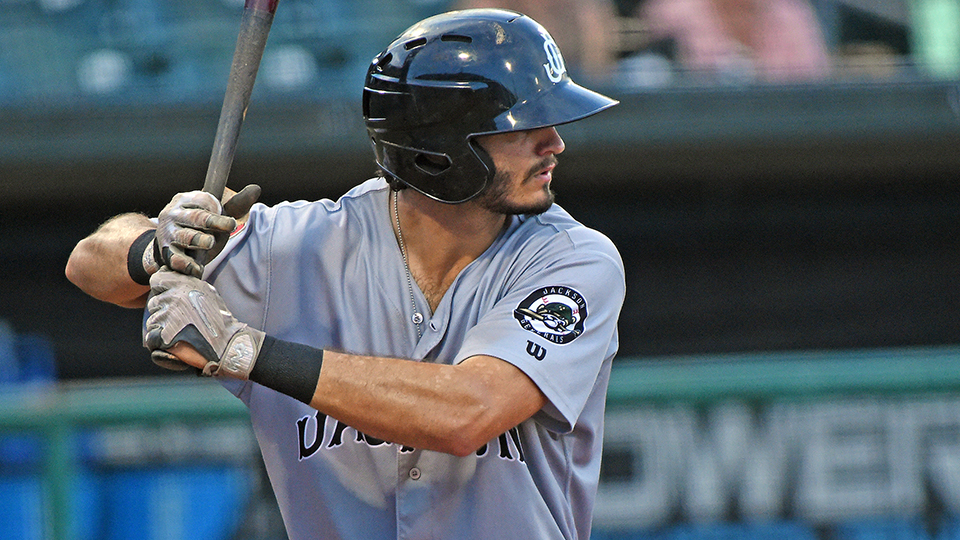 Ben DeLuzio has a five-game playoff hitting streak and has RBIs in his last three contests. (Brian McLeod/MiLB.com)

With one swing of the bat on Wednesday night, Ben DeLuzio went from zero to hero.

After striking out in his first four at-bats, the D-backs prospect delivered a go-ahead double as Jackson scored four times in the ninth inning to beat Biloxi, 6-2, and square the best-of-5 Southern League Finals at 1-1 at MGM Park.

DeLuzio said he's been trying to make a mechanical adjustment to his swing over the last month.

"And lately, it's kind of been falling apart a little bit," he said. "I guess I've been overthinking a little bit here and there because in baseball, when things start to get dysfunctional, it starts spiraling, keeps compiling."

WIth the Shuckers down by a run in the eighth, Cooper Hummel singled home Joantgel Segovia to tie the game at 2-2.

Biloxi right-hander Anthony Bender (0-1) retired the first two hitters in the top of the ninth before the Generals took control.

"I just tried to go back to basics and think about when I was hot during the season," the 25-year-old center fielder said, "when things were clicking."

DeLuzio drove a 1-1 hanging slider down the left field field for a double that extended his postseason hitting streak to five games. Duzenack was able to score all the way from first when shortstop Bruce Caldwell could not handle the relay throw.

"Oh gosh, I was ecstatic," the 2013 third-round pick said. "Especially in your first four at-bats, you get four punchies and then you come up big for the team -- there's not much more you could ask for."

D-backs No. 5 prospect Daulton Varsho and Pavin Smith followed with RBI doubles and Drew Ellis capped the outburst with a run-scoring single that made it 6-2.

Josh Green, Arizona's 21st-ranked prospect, gave up two hits and a walk while striking out three over seven scoreless innings, exiting with a 2-0 lead. The right-hander escaped a bases-loaded jam in the second and, after a leadoff single by Shuckers starter Dylan File in the third, retired the last 14 batters he faced.

Jackson took the lead in the fourth on Ramon Hernandez's RBI single and extended it in the eighth when fourth-ranked D-backs prospect Seth Beer singled in Varsho.

File tied his season high with nine strikeouts over six innings. He gave up an unearned run on four hits and did not walk a batter, lowering his ERA to 0.63 in two postseason starts.

Game 3 is Friday night in Jackson.