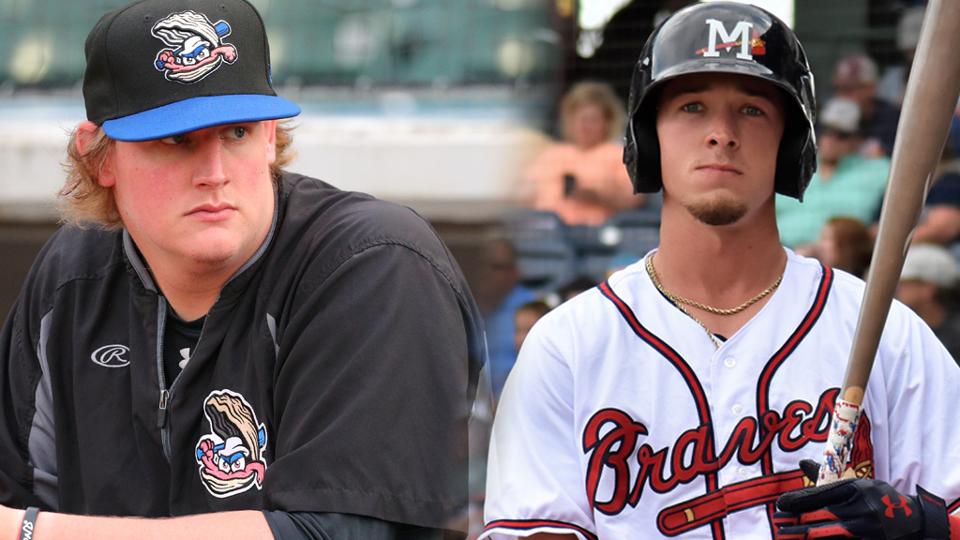 From the start of the year until they left the circuit, Trey Supak (l) and Drew Waters dominated the Southern League.

Start strong. Finish strong. It's not easy to do both, but Drew Waters and Trey Supak did so to earn some well-deserved hardware.

The Southern League announced its postseason All-Stars on Wednesday, with Waters named Most Valuable Player and Supak taking home the Most Outstanding Pitcher award.

Waters, who ranks No. 25 in MLB.com's Top 100 Prospects, batted .319/.366/.481 over 108 games at Double-A Mississippi. He posted league-best totals in hits (134), doubles (35), triples (nine) and batting average while ranking second in total bases despite being promoted to Triple-A Gwinnett on Aug. 5. He also chipped in five home runs and 13 stolen bases.

Supak, the Brewers' No. 12 prospect, returned to the Southern League after going 6-6 with a 2.91 ERA in 16 starts for Biloxi in 2018 and improved across the board. Although he was promoted to Triple-A San Antonio on July 26, he remained tied for the circuit lead with 11 wins and led the league with a 0.87 WHIP while ranking second in ERA (2.20) and posting a 91-to-23 strikeout-to-walk ratio.

The top challenger to Waters' MVP crown was fifth-ranked D-backs prospect Daulton Varsho, who led the Southern League after 104 games with an .892 OPS and 81 runs scored while ripping 46 extra-base hits (25 doubles, four triple, 17 homers), stealing 21 bases and finishing in the top three in both on-base percentage (.375) and slugging percentage (.517).

No. 11 overall prospect Cristian Pache was named to the outfield along with teammate Waters after posting a .278/.340/.474 batting line with 11 homers, 53 RBIs and eight stolen bases.

On a roster littered with Atlanta prospects, 13th-ranked Tucker Davidson claimed top southpaw honors after going 7-6 with a league-leading 2.03 ERA and 11 strikeouts over 110 2/3 innings at Mississippi.

Here is the complete list of Southern League end-of-season All-Stars: