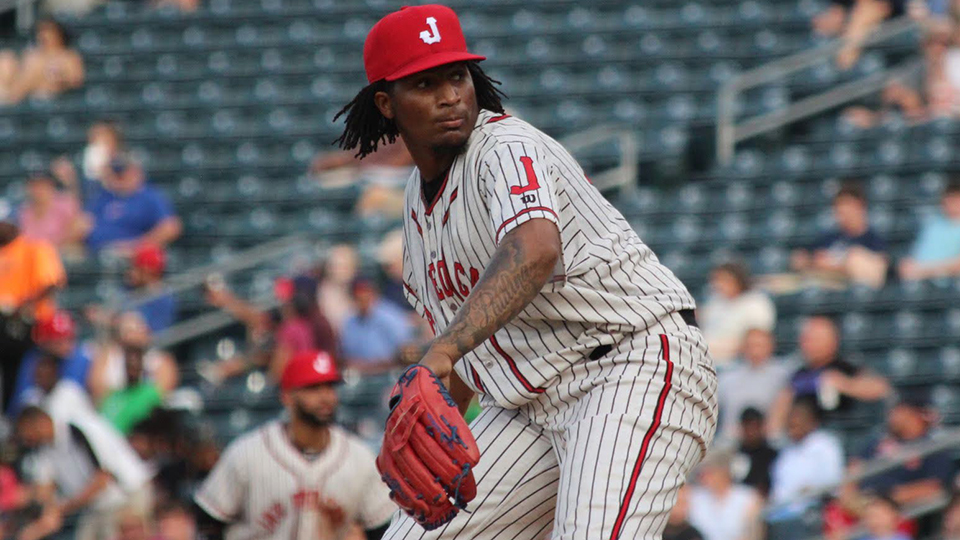 Sixto Sanchez began his 21st year the same way he ended his 20th -- with a scoreless outing.

The top Marlins prospect turned in his second consecutive shutout start as he worked around a pair of hits and a walk to strike out five over six innings on his birthday to lead Double-A Jacksonville past Pensacola, 1-0, on Monday at the Baseball Grounds of Jacksonville.

"He was executing pitches," Jumbo Shrimp skipper Kevin Randel told the team's website after the game. "He had a good three-pitch mix. Worked the fastball down to the top, he was on the edges. Ran in to some lefties, ran in to some righties. The slider showed up late, but the changeup was always there all game. So he just throws up six zeros fairly easy."

Sanchez (7-4) has turned things around since being tagged for eight runs on seven hits and three walks over 3 2/3 frames against Chattanooga on July 2. The 21-year-old has pitched six or more innings in four starts since then -- yielding two earned runs or fewer each time out while posting a 1.04 ERA over that span.

Against the Blue Wahoos, MLB.com's No. 26 overall prospect worked around a leadoff double and a stolen base by top Twins prospect Royce Lewis in the opening frame by whiffing fifth-ranked Trevor Larnach on three pitches. Sanchez coaxed No. 10 prospect Ryan Jeffers into a groundout and fanned Jimmy Kerrigan to escape Pensacola's only true threat.

The Dominican Republic native retired seven of the next eight batters he faced -- allowing just a leadoff single by Jordan Gore in the third -- before plunking Kerrigan with a 2-2 offering with one out in the fourth. Kerrigan was caught trying to steal second by Jacksonville catcher Santiago Chavez to end the inning.

Sanchez ended his outing by setting down the final six batters he faced -- needing just eight pitches to navigate through the fifth. He was pulled after throwing 76 pitches -- 49 for strikes. He exited after 76 pitches for the second straight outing.

"That's what we're going to do. We're going to conserve his innings down the road here to the stretch," Randel said. "We don't want to shut him down. We want him competing all the way to the end of the season, so we're going to limit some innings -- limit some extended outings. So, if he's going to go out there and give us six innings every time, that's fine with us. We'll just go ahead and use the bullpen a little more down the stretch run."

Sanchez opened the season in the Florida State League and made two starts for Class A Advanced Jupiter -- posting a 4.91 ERA with six punchouts over 11 frames before being promoted to the Southern League on May 14. Over 14 appearances with the Jumbo Shrimp, the 6-foot, 185-pounder sports a 2.96 ERA and a 1.06 WHIP with 83 punchouts and 15 walks over 82 innings. He's limited opponents to a .231 average.

Righty Tommy Eveld and southpaw Dylan Lee combined to complete the shutout. Eveld gave up a walk and struck out a pair over two frames and Lee worked around a hit and whiffed one in the ninth to earn his 12th save in 13 chances.

Jacksonville's Riley Mahan accounted for the lone run in the game with a one-out dinger to right-center in the first off left-hander Bryan Sammons (3-4).