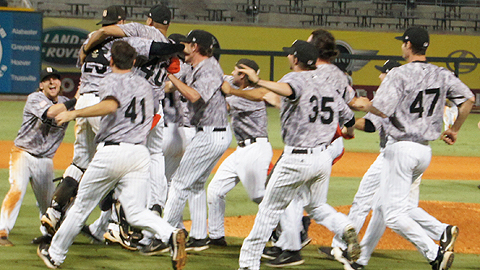 Micah Johnson has already proven himself as many things in his baseball career. On Sunday, he added "winner" to that list.

"Honestly, I've never won anything. The only thing I'd ever won was a FIFA tournament, man," the Birmingham second baseman said in reference to the EA Sports soccer video game.

But Johnson got the chance to hoist a championship trophy Sunday. The No. 15 White Sox prospect belted his first Double-A homer and drove in two runs as Birmingham overcame an early two-run deficit to beat Mobile, 4-2 in the decisive fifth game of the Southern League Championship Series.

The win gave the Barons their Southern League sixth title and first since 2002.

The 2012 ninth round pick led off the bottom of the first inning with a home run -- his first with Birmingham. The 22-year-old speedster hit seven home runs between Class A Kannapolis and Class A Advanced Winston-Salem during the regular season as he zipped through three Minor League levels.

"Ever since I've been here, I've been joking around with people about how I'll hit a first-pitch home run," he said. "That hadn't happened and I don't really hit home runs. … I just wanted to get on base and create some momentum. Luckily, he threw a pitch I could hit, and I tried to put a good swing on it and get a line drive. It happened to go over."

"He has a powerful swing, a strong swing," Barons manager Julio Vinas said. "He's very comfortable with his game, hitting the ball gap-to-gap, driving the ball into the gap and hitting it on the ground and using his speed. He's done that very well for us. Hopefully, he can just continue to grow."

While Johnson has shown some power, he garnered much more press this summer for his work on the basepaths. The 22-year-old took the Minor League stolen-base crown from top Reds prospect Billy Hamilton, swiping 84 bags across three levels.

He began the year as a sparkplug for Kannapolis, batting .342 with a .952 OPS in 77 games while stealing 61 bases. He was promoted to Winston-Salem in July and found some quick success. He batted .275 with a .309 on-base percentage while stealing 22 bases in 49 games.

Johnson was promoted to Double-A near the end of the season and struggled in five regular-season games with the Barons, hitting .238 with four strikeouts and just one steal in 21 at-bats. The Indianapolis native broke out in the playoffs, though, and was perhaps the Barons best player in the Championship Series.

As Birmingham won the opening two games of the Finals, Johnson went 4-for-9 with three walks, three runs and two RBIs. He also was 3-for-4 with a run and two stolen bases in the team's Game 4 loss.

Including Sunday, Johnson hit 9-for-19 (.474) with six runs, four RBIs, two steals and the home run in the five-game series.

"He's full of energy," Vinas said. "He led off for us, and he got on all the time and was stealing bases. He did so many things to give so many guys the energy and boost we needed. He was a breath of fresh air, and I'm very happy with the job he did."

Birmingham got five two-run innings from starter Myles Jaye before Vinas turned the game over to right-hander Ryan Kussmaul. The reliever was electric over 2 2/3 scoreless innings, striking out six while limiting the BayBears to two hits.

Signed in 2010 as a free agent out of Mount Olive (N.C.) College, Kussmaul missed time in the middle of 2013 due to a finger wart on his right hand, but was stellar when on the mound. Over 23 appearances, he pitched 33 1/3 innings with a 2.43 ERA and 36 strikeouts, seven walks and two homers allowed. Opponents batted just .200 against the native of Fennimore, Wis.

Vinas is bullish on the right-hander's future.

"Absolutely, I think he'll pitch in the big leagues," the skipper said. "He has a funky delivery, three-quarters from a low slot. He has a lot of movement on his fastball. He probably fed them 90-95 percent fastballs today.

"He was blowing it by them with good sink. He has an erratic delivery, which really throws hitters off. They don't take good swings off his fastball, which is a plus for him."

Birmingham fell in a 2-0 hole in the first inning as Nick Evans singled in a pair of runs for Mobile. Johnson slimmed the score to 2-1 with his solo homer in the first, and then the Barons scored three runs in the bottom of the second, one on an RBI infield single by Johnson.

The Barons' title came the same year they returned to downtown Birmingham in their inaugural season at Regions Field.

"It's been a great experience," Vinas said. "I've said from Day 1, this is a special group of guys and that's how it played out all year. They never gave in, kept battling. It was a really incredible year. The celebration after was well worth it for them. They really deserved it."