Twins southpaw puts six runners on base, strands all of them 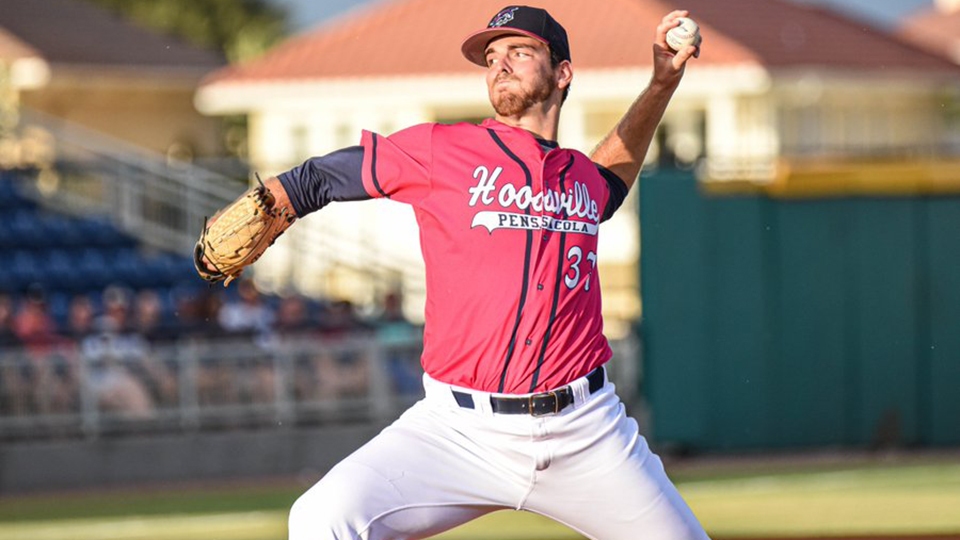 Bryan Sammons has allowed four earned runs over his last four starts to shave more than a run off his ERA. (Pensacola Blue Wahoos)

Despite walking five batters and hitting another, the Twins prospect navigated six hitless innings for Double-A Pensacola on Saturday night to set the foundation in a 3-1 win over Birmingham at Blue Wahoos Stadium. He struck out exactly six batters for the third straight start and lowered his Southern League ERA to 4.18.

"You gotta have a short-term memory as a pitcher," Sammons said. "If you get runners on base, you just gotta bear down and just lock in and get ready for the next pitch."

Sammons (4-4) put at least one man on in every inning except the fifth, when he threw five pitches in a 1-2-3 frame. The only baserunner to advance, though, was ninth-ranked White Sox prospect Luis Alexander Basabe, who walked in the third and moved up on a passed ball by Ben Rortvedt. Four of the five walks the left-hander issued came on full counts.

"I felt like my off-speed, especially my curveball and cutter, were well-located early in the game," Sammons said. "My fastball was a little sporadic throughout, but I started to throw my changeup for more strikes in the game, which is something that I've been working on all season. So that felt good."

The 24-year-old began the season with Class A Advanced Fort Myers and posted a 0.94 ERA over 38 1/3 innings. He struck out 21.4 percent of batters and carried an 8.4 percent walk rate. Command, Sammons said, was the key. He focused on picking a target earlier. He located his fastball up in the strike zone. He spotted his curveball low. The tunneling he could create between the two pitches helped him stay scoreless in half of his eight starts.

A late-May promotion had not produced the same results. He allowed one home run in the Florida State League but has been tagged for a dinger in six of his 12 Southern League appearances. Health factored. Sammons began to experience some shoulder discomfort and spent a little more than a week on the injured list.

"I could definitely tell the difference in the level of talent and how hitters hit mistakes better here," he said. "I was also going through some nagging things, which made it a little tougher."

Monday will mark one month since his return to the active roster. He said he's feeling better and showed it, too. Saturday was Sammons' third scoreless outing for Pensacola, and he's allowed two earned runs or fewer each of his last four times on the mound.

The Blue Wahoos took the no-hitter into the eighth but lost it when No. 10 White Sox prospect Blake Rutherford knocked a one-out single off left-hander Gabriel Moya. Birmingham's lone run came in the ninth when 13th-ranked Luis Gonzalez homered to right off right-hander Alex Phillips, who recorded his fourth save.

Three solo homers -- sort of -- were all Pensacola needed on offense. Twins No. 5 prospect Trevor Larnach left the yard in the fourth inning, Ryan Costello went deep in the seventh and top Twins prospect Royce Lewis rounded the bases in the eighth, but his homer was that of the Little League variety. He tripled and scored on a throwing error by shortstop Zach Remillard.