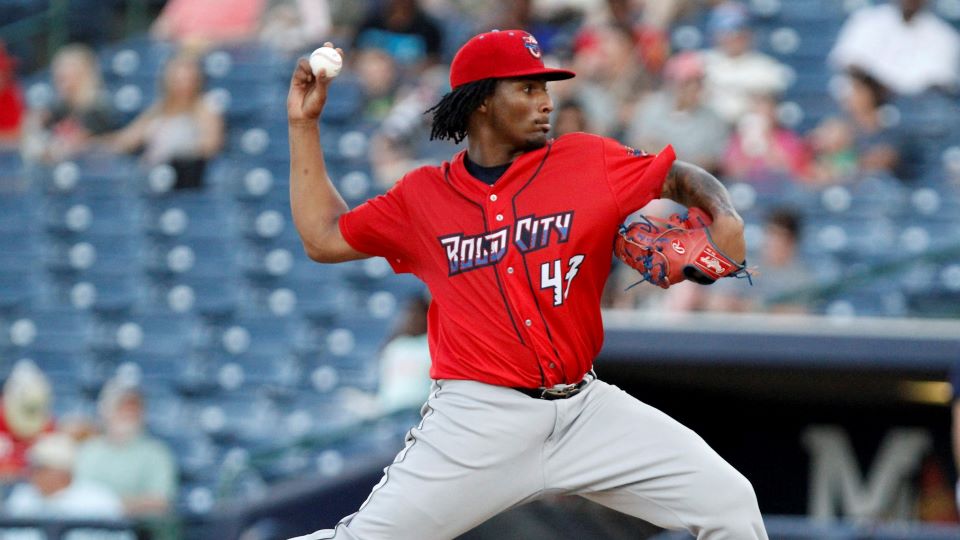 Sixto Sanchez sports a 2.63 career ERA since the start of his professional career in 2015. (Ed Gardner/MiLB.com)

Sixto Sanchez may have ended up on the wrong side of a pitchers duel Thursday, but he still accomplished a feat last achieved over a year ago.

Miami's top-ranked prospect struck out 10 batters over seven innings as Double-A Jacksonville fell to Montgomery, 1-0, at Montgomery Riverwalk Stadium. Sanchez surrendered four hits and walked two while setting the season high in whiffs. The last time the 20-year-old recorded double-digit strikeouts was May 25, 2018 with Class A Advanced Clearwater.

MLB.com's No. 22 overall prospect went seven frames for the second consecutive start. Sanchez posted his first two strikeouts in a 1-2-3 first inning before retiring the side in order in the second on just three pitches. Minus a leadoff single by Miles Mastrobuoni in the third, it was smooth sailing for the right-hander through his first four innings.

But Sanchez ran into some trouble in the fifth. After fanning Tampa Bay's third-ranked prospect Jesus Sanchez to lead off the frame, he served up back-to-back doubles to Kevin Padlo and 28th-ranked Tristan Gray. Gray's two-bagger drove in Padlo for the only run of the game.

Sanchez rebounded by striking out the side on 10 pitches in the next inning, starting with Rays No. 6 prospect Vidal Brujan in his Southern League debut. After a leadoff single by Jesus Sanchez in the seventh, the native of San Cristobal, Dominican Republic again retired three straight Biscuits via the strikeout to finish his night.

Jacksonville's bats remained silent, saddling the sixth-ranked righty pitching prospect with the loss to even his record at 3-3. He threw 93 pitches, 62 for strikes.

But of late, Sanchez has put together his best stretch of outings since his promotion Class A Advanced Jupiter on May 14. In his last three starts, he has given up only three earned runs and three walks while recording 23 strikeouts over 20 innings. His ERA has dropped to 2.77, the lowest it has been since his second appearance for Jacksonville.

After being shipped to the Marlins as part of the J.T. Realmuto trade, Sanchez has posted a 3.14 ERA through two levels of the Minors. He's logged 52 innings for the Jumbo Shrimp and has fanned 54 while surrendering only two home runs.

Paul Campbell (3-0) picked up the win after yielding three hits over five frames. The righty struck out four and did not issue a walk while throwing 69 pitches, 46 for strikes. Phoenix Sanders picked up his ninth save after giving up one hit and striking out two over the final two innings.