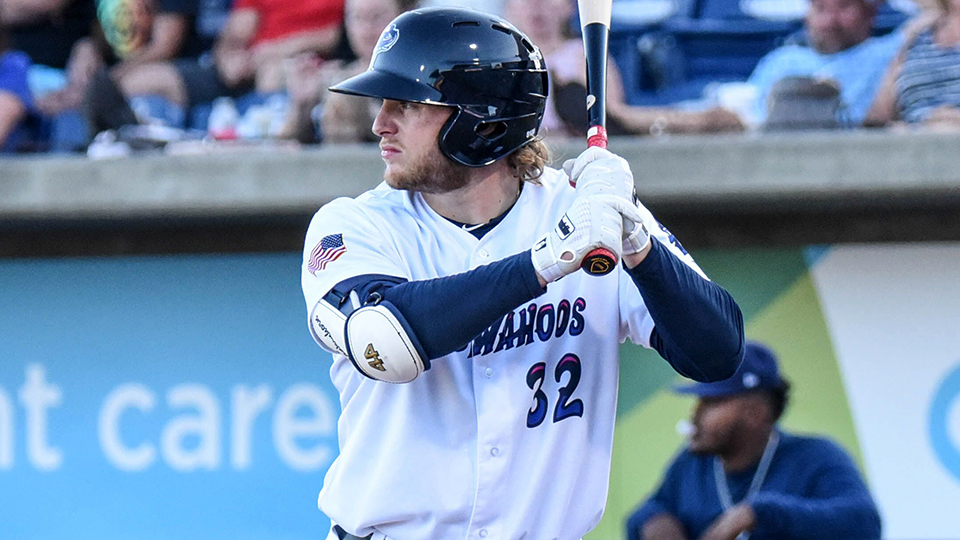 Travis Blankenhorn's career high for home runs in a season is 13, set at Class A Cedar Rapids in 2017. (Daniel Venn/Pensacola Blue Wahoos)

He was just here.

Travis Blankenhorn couldn't help but feel that way when he saw Luis Arraez on a Major League field, making his debut for the Twins against the Mariners last Saturday. Indeed, he had been. Arraez played with Blankenhorn in a doubleheader for Double-A Pensacola on May 13, moved up to Triple-A Rochester the next day and was with Minnesota by the following weekend. Players at the Double-A level are regularly reminded that the bright lights of the Major Leagues aren't far away, but here was an immediate, real-world example.

"They just want us to have fun out there and go play to the best of our abilities. That's the feeling I got from my time on the Major League side in the spring," Blankenhorn said of the Twins, who lead the AL Central with a 32-16 record and sit a half game back of the Astros for the best record in the Majors. "We just need to play the game we know how. You always think that, and then you look up and my buddy Luis Arraez is on the TV in the big leagues because he was doing that. He was just at this level, and there he is. It's fun to watch."

And in that way, perhaps Blankenhorn's own breakout in his first turn at Double-A has been exceptionally well timed.

The Twins' No. 28 prospect, after his promotion from Class A Advanced Fort Myers on April 26, has produced a .305/.356/.526 line in his 24 games with the Blue Wahoos. His six homers and 50 total bases over that span are both third-most among Double-A hitters. In the Southern League, only No. 55 overall prospect Jazz Chisholm has gone deep as many times as times as Blankenhorn. Only No. 66 overall prospect Drew Waters has close to as many total bases, with 45.

"I'm just trying to stay in the strike zone," Blankenhorn said. "They're going to eat you alive here if you don't. They'll do that at any level, actually. So it's definitely something I needed to start doing a better job of."

The 22-year-old left-handed slugger was indeed in danger of slipping down the Minnesota depth chart if he hadn't started turning things around in 2019.

Blankenhorn was seen as a primo athlete coming out of Pottsville High School in Pennsylvania, where he starred in baseball, basketball and football. The Twins took him in the third round of the 2015 Draft, seven spots ahead of AL Rookie of the Year contender Brandon Lowe, and signed him for $650,000. Minnesota took a cautious approach with the Keystone Stater, opening him at Rookie Advanced Elizabethton the season after the Draft, and as a result saw him take off. He hit .293/.348/.502 with 10 homers in 59 games between the Appalachian and Midwest Leagues.

The 6-foot-2, 228-pound slugger identified his high strikeout rate as the first thing that needed fixing. He fanned 25.8% of the time last season with the Miracle, the 11th-highest mark among 53 qualifiers in the Florida State League. That's down to 21.2% this season between Fort Myers and Pensacola, and while that isn't a vast difference, it's been enough to allow Blankenhorn to utilize his raw pop.

"I've always had some power, I think, although the FSL didn't help that at all," he said. "But you can't blame that. The biggest thing has been swinging at good pitches. You're not going to hit home runs if you're not doing that in the first place. For me, it meant a lot of rolling over on my swings and striking out. I've tried to eliminate that."

But it's not just sticking to pitches thrown in the zone that's allowing the Twins prospect to take off. It's the type of pitches that are being pitched in the zone.

"The biggest piece for Travis has been understanding where he does damage well and using that to his advantage," said Pensacola hitting coach Steve Singleton. "If you're thinking about it that way, you can tell right away whether a pitch is going to be what you're looking for or not. I talked to him yesterday about how he's sitting more zone than pitch. I wasn't as gifted a hitter as Travis is during my playing days, but my best years were when I was sitting zone instead of pitch. It's insightful on his part that that's something he found on his own, and it's little things like that that will come along as he gets more experience."

Blankenhorn has noticed he's seeing more splitters in the Southern League than ever before, but as he's focused more on location than pitch selection, he's been able to lay off the pitches that bounce below the zone and out of his reach.

Despite his size, Blankenhorn hasn't typically been seen as an in-game power machine. He's never hit more than 13 homers in a Minor League season, and his career slugging percentage of .426 leaves a little to be desired. But the potential for pop has always been there. Singleton said that was evident when he first saw Blankenhorn back in 2016. It's just taken some time for his approach to catch up to the potential.

"He's got a very quick and powerful stroke," the hitting coach said. "He can be quick to fly open, but he's found ways to keep his weight balanced so he's not crashing into his front side too much. He's also developing different feels that allow him to get into his back heel and hip for a better load and continue to control that weight shift. He understands things like that in simple terms. He may not be able to quote it back to you exactly, but he picks up on the one or two cues he needs to put it all together."

Blankenhorn's positioning is the other question he faces. He played shortstop in high school but didn't quite have the range for the position in the Minors, so the Twins moved him to second and third in the early part of his career. He still primarily plays second base but has added more left field to his profile over time, making 13 of his 34 defensive starts on the grass this season. As if there wasn't already enough pressure on Blankenhorn to turn things around with the bat, a move to the corner outfield would add more, given the higher offensive expectations for the position. But that's not something he or the organization is worried about just yet.

In the best-case scenario, Blankenhorn shows this turnaround is real and gives the Twins a good problem as they try to figure out a better long-term position for him. That problem may be a few more months of sustained production away, but as Arraez showed, Blankenhorn isn't necessarily all that far from the Majors.

"Guys here can get frustrated playing in some bigger parks with a ball that does a few different things than it may be doing at Triple-A or the Majors," Singleton said. "But when Travis is hitting the ball at 108 mph off the bat with a 22-degree angle, that is a home run at the big league level. That's what we remind him and all these guys. The hardest thing to do for him is keeping this going and being consistent -- it's the hardest thing to do in all of hitting. But he's got a chance."