Supak falls one out short of no-hitter

Brewers No. 11 prospect only gives up single over seven innings 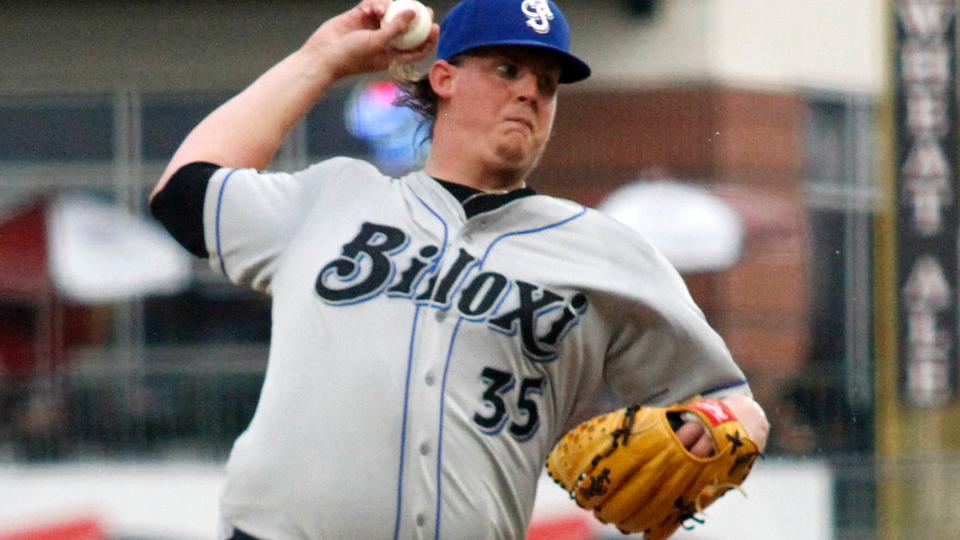 Trey Supak also came within one out of a no-hitter on May 30 against Tennessee. (Ed Gardner/MiLB.com)

Trey Supak had two hits for Double-A Biloxi on Tuesday night. That was one more than he gave up to Chattanooga.

The Brewers No. 11 prospect came within an out of a seven-inning no-hitter, striking out nine, as the Double-A Shuckers defeated the Lookouts, 8-0, at MGM Park. Ninth-ranked Reds prospect Jose Siri singled up the middle to end Supak's second bid for history this season.

Supak (10-4) retired the first 12 hitters before walking Cincinnati's No. 24 prospect Ibandel Isabel to begin the fifth. He struck out Siri and induced consecutive flyouts from Brantley Bell and Chris Okey to end the frame.

"Everything was working for him," Biloxi pitching coach Bob Milacki said. "His command and his changeup were very good. He used his curveball early in counts to throw strikes. His slider was good and he was locating his fastball on both sides of the plate."

After Reds No. 15 prospect Michael Beltre lined out to start the sixth, Calten Daal reached first on a fielding error by shortstop Bruce Caldwell. Cincinnati's 28th-ranked prospect Alfredo Rodriguez grounded out to third and MLB.com's No. 27 overall prospect Taylor Trammell popped out to second to put the 23-year-old three outs away from history.

The disappointment of losing the no-hitter quickly faded away for Supak, Milacki stated, particularly because of his two-hit night at the plate. Supak singled to center field in the second and lofted another knock to center in the fifth, but was thrown out at second by Siri on the play.

"He said, 'You know what? One way I can look at it is that I got more hits than I gave up, so that's gotta be good," the coach said. "Of course he wants the no-hitter ... but he's really professional about the way he carries himself. He goes, 'It just wasn't meant to be.'"

Milacki recognizes Supak's pitch command is part of the righty's success, but adds that the way he prepares for outings puts him ahead of other hurlers.

"He really pays attention to the hitters when he's doing the chart and has good recall and memory on him of hitters the last time he faced them," Milacki said. "His preparation going into each game, he has prepared a game plan and is always talking to the catcher between innings about what do you think we should do to this guy."

At 6-foot-5 and 240 pounds, his coach considers Supak more agile than many his size.

"He carried his weight pretty well," Milacki said. "For as big as he is, he's pretty athletic."

Cooper Hummel belted a solo dinger to lead off the second, finishing 3-for-3 with three runs scored. Caldwell doubled in two runs in the third. Joantgel Segovia added a two-RBI double in the fifth, crossing the plate on a double by Max McDowell.