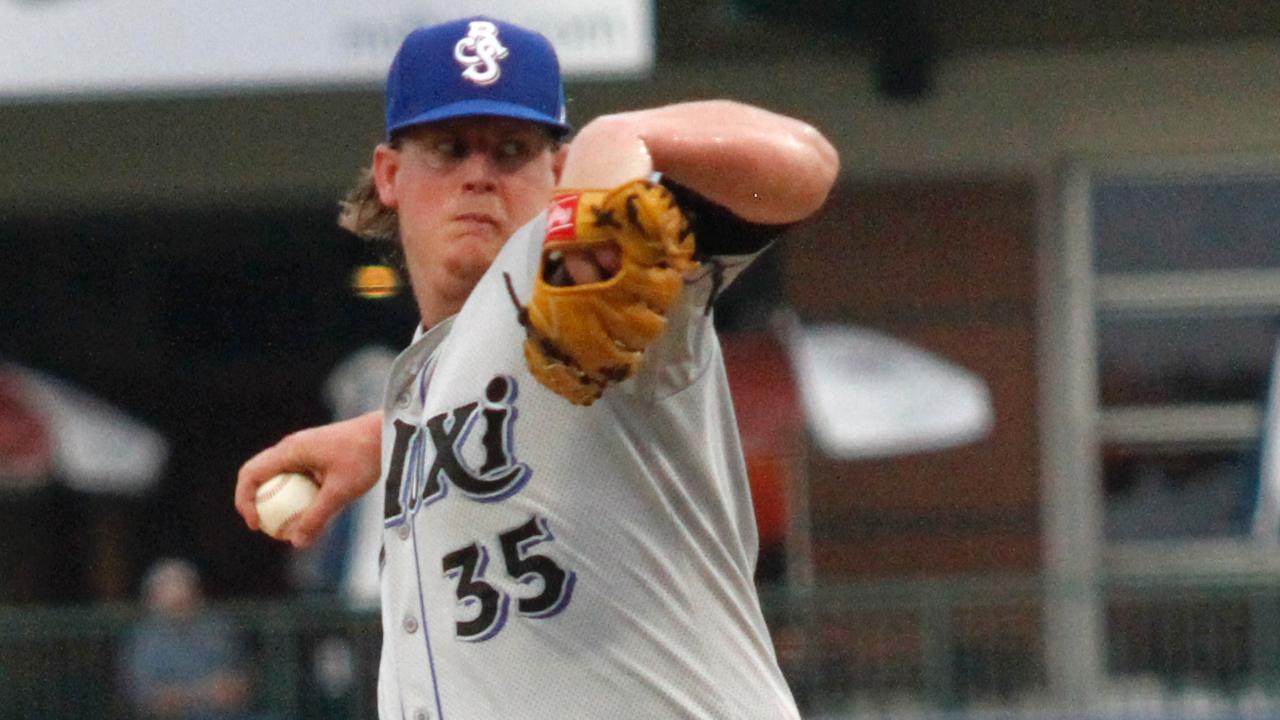 Trey Supak brought his A-game to the mound Monday, and for good measure, notched a career first in the batter's box.

The 11th-ranked Milwaukee prospect yielded a run on two hits across seven innings as Double-A Biloxi staved off Mississippi, 4-3, at Trustmark Park. Supak also collected his first career extra-base knock in the victory.

Atlanta's Ender Inciarte, on a rehab assignment while recovering from a lumbar strain, led off the game by reaching on a fielding error by third baseman Jake Gatewood, the Brewers' No. 28 prospect. After that, the 23-year-old sat down six straight Braves.

"Just another night with a hitter in the box," Supak said of facing a Major League regular to start the game. "There's a hitter, I have a baseball. It doesn't matter who's in the box. Inciarte got in the box like everybody else. It doesn't matter the level, it's just a hitter. I have a job to do -- keep hitters off balance. [The Braves] like to attack the ball, so it was a case of keeping them off balance."

Working with a 3-0 lead in the third, the right-hander allowed back-to-back singles to Daniel Lockhart and Claudio Custodio, then Inciarte advanced the runners with a flyout to right field. MLB.com's No. 44 overall prospect Drew Waters followed with a 4-3 groundout that plated Lockhart before coaxing Tyler Neslony into an inning-ending grounder to first.

"First and second, it was a first-pitch breaking ball to Inciarte," Supak said. "Then Waters came up -- just me vs. him -- and it was an RBI groundout, but I didn't let him beat me.

"In that case, it was just limit the damage. Two on, nobody out ... that could have been a big inning. That's where the scouting report plays in."

In the top of the seventh, Supak (9-4) went on the offensive against right-handed reliever Connor Johnstone. With one out, the career .195 hitter ripped an 0-2 pitch past a diving Lockhart at third and down the left-field line for a double. The hit lifted his average above the Mendoza Line (9-for-44, .205). Michael O'Neill followed with a single to right that put runners on the corners before Johnstone wriggled off the hook with a punchout of Bruce Caldwell and a flyout to right by Dillon Thomas.

"When I got back to the dugout, I thought, 'I think that's my first double,'" Supak laughed. "Then it was back to the mound to finish.

"After the seventh, it was a case of when I'm done. Sometimes I'll tell them, 'No, I'm good,' but it was hot tonight. I got in seven innings, and being able to do that comes from the work I do in the five days before each start, and the offseason, keeping my legs strong."

The supplemental second-round pick in the 2014 Draft retired the final 12 batters he faced, five via the strikeout. Braves No. 12 prospect Greyson Jenista, who had three base knocks Sunday and hits in six of his last seven games, struck out all three times he faced the Texas native.

Supak exited after seven frames and 90 pitches -- 61 for strikes -- and lowered his ERA to 2.29, sixth best in the Southern League. He leads the circuit with 110 innings pitched. He finished with seven strikeouts, one shy of his season high, done most recently on June 9 against Pensacola.

"I think it stems from my workouts the previous offseasons and everything else just coming together," he said of his recent successes. "In the offseason, I let my body relax, take four or five weeks off. After that, I get on a bike, get my legs under me. I'll work on my arm, but really, as a bigger guy, I look to strengthen my core and get ready for the season.

"A lot of it is offseason, but also our pitching coach [Bob Milacki] and catchers, we do a great job pregame with the scouting report and tendencies, knowing the hitters."

Brewers No. 17 prospect Marcos Diplan earned his second save, allowing a walk while striking out one in the ninth. Weston Wilson was 2-for-4 with a homer and two runs scored for the Shuckers, while O'Neill added two hits and scored once.

Mississippi's Ryan Casteel had a two-run dinger in the eighth, his 15th of the season.

Custodio (3-2) took the loss after giving up three runs -- two earned -- on four hits and a walk in four innings. He struck out four.