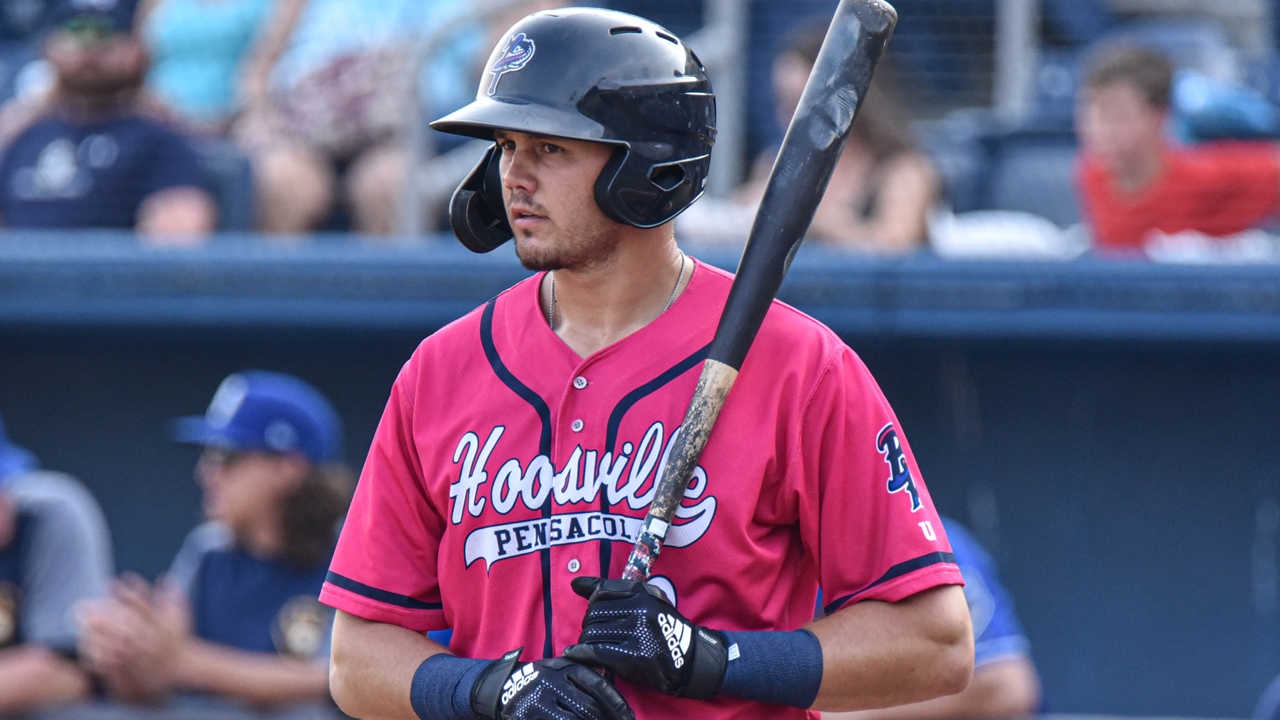 Trevor Larnach was promoted to Double-A on July 16 after playing in the Florida State League All-Star Game. (Pensacola Blue Wahoos)

Trevor Larnach burned his way through two Minor League levels in his first full professional season, capturing midseason and end-of-season All-Star recognition as well as the Florida State League's MVP award. With the campaign in the books, he added to his haul Sunday.

The Twins named MLB.com's No. 78 overall prospect their 2019 Minor League Player of the Year on Sunday. Right-hander Randy Dobnak took home Pitcher of the Year honors.

Larnach posted an identical .842 OPS in his stops at Class A Advanced Fort Myers and Double-A Pensacola, combining to play 127 games. With Fort Myers, the Oregon State product put up a .316/.382/.459 line in 84 contests, belting six homers and driving in 44 runs to earn spots on two FSL All-Star squads.

"Baseball is a game of failures, so if you fail it's just part of the game," the 22-year-old told MiLB.com earlier this year. "You just have to keep grinding through it and keep doing what you do best and just stick with your process. When you do that, things are gonna happen naturally. So I'm just in my constant routine and trying to do all the things I need to do, stay healthy and keep plugging away."

"I take every day as a new day," Larnach said in the spring. "Whatever happened yesterday, just erase it and start a new day and focus on what I need to do that day. You can't live in the past. For me, that doesn't work. I try really hard not to be streaky -- living in past success doesn't help your mind-set on game day. So I just focus on each game at a time: a new day, is a new day."

Larnach was drafted 20th overall in 2018, a short time before he helped lead Oregon State to its third College World Series title. The Walnut Creek, California, native played 42 games between Rookie Advanced Elizabethton and Class A Cedar Rapids in his debut season, batting .303/.390/.500.

Dobnak climbed through three Minor League levels to make his big league debut this season, only two years after being signed by the Twins as an undrafted free agent out of Division II Alderson Broaddus University. In 24 Minor League outings, including 21 starts, the 24-year-old right-hander went 12-4 with a 2.07 ERA for Fort Myers, Pensacola and Triple-A Rochester. He recorded 109 strikeouts while walking 28 over 135 innings, putting up a 0.98 WHIP and limiting opponents to a .212 average.

Dobnak made his Twins debut on Aug. 9 and compiled a 1.59 ERA in nine big league outings, including five starts.