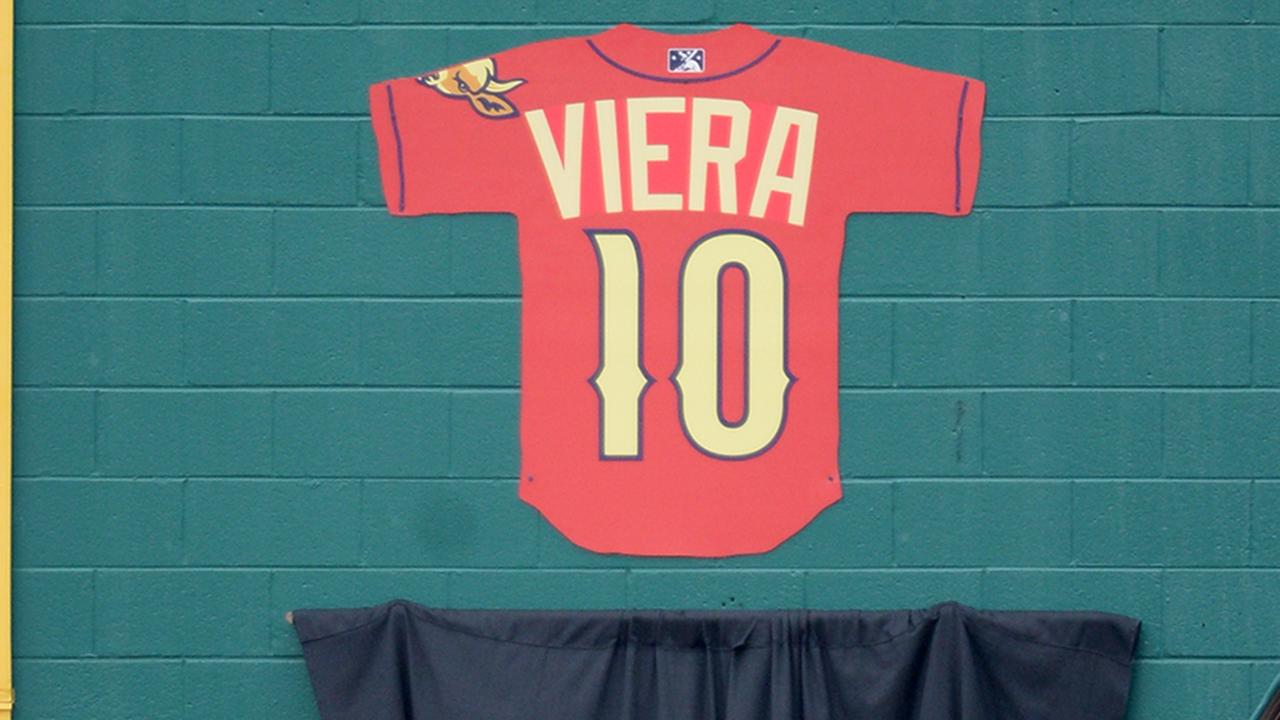 UNIVERSITY PARK, Pa. - The State College Spikes welcomed a crowd of 5,233 fans to Medlar Field at Lubrano Park to celebrate the life and legacy of Josiah Viera as part of the Opening Night game of the 2019 home schedule on Saturday night.

While the Spikes fell to the Crosscutters, 5-4, fans were still able to pay tribute to the club's honorary bench coach as his number 10 jersey was retired in a pre-game ceremony.

Following the unveiling of the jersey display on the right field wall, Josiah's grandfather Dave Bohner and his sister Daisha Viera each threw out ceremonial first pitches to begin the season. The Spikes also wore memorial "JV" patches on the right sleeve of their red jerseys, featuring a field diagram originally drawn by Josiah himself.

In addition, fans were invited to join in a moment of joyful celebration at the end of the first inning and gave Josiah one more standing ovation at Medlar Field at Lubrano Park.

Once the ceremonies were complete, the Spikes (1-1) turned to business on the field and jumped out in front with a big third inning. Trailing 2-0 going into the frame, State College responded by putting the first five batters on base en route to scoring four runs in the stanza. Carlos Soto 's two-run single and Andrew Warner 's two-run double provided the inning's biggest blows.

However, the Crosscutters (1-1) scratched across a run in the eighth when Corbin Williams singled, advanced to second on a wild pitch, and scored on a throwing error by pitcher Jacob Schlesener .

In the ninth, Williamsport rallied to snatch the victory away. Nick Matera reached base via an Edwin Figuera throwing error to start the inning, then moved to third on Seth Lancaster 's single and scored on Christian Valerio 's sacrifice fly to tie the game.

Lancaster then plated the eventual winning run when he came home on an Eli Kraus (0-1) wild pitch.

Kraus took the loss despite both of the ninth-inning runs he allowed being unearned. The left-hander gave up one hit and struck out one batter.

Sunday, the Spikes hit the road to Central New York as they take on the Auburn Doubledays (Washington Nationals) in a 4:00 p.m. matchup to begin a two-game mini-series at Falcon Park. State College is slated to send left-hander Nathaneal Heredia, the youngest player on the team at just 18 years old, to the hill. Auburn will counter with right-hander Pedro Gonzalez .

Following an 11 a.m. game on Monday in Auburn, the Spikes will renew acquaintances with Williamsport with a 7:05 p.m. Tuesday matchup at BB&T Ballpark at Historic Bowman Field.

Catch all of the action on Sunday via the Spikes Radio Network, presented by Penn State Sports Medicine, Official Healthcare Provider of Penn State Athletics, at 3:45 p.m. with Spikes Live, presented by Mount Nittany Health, on the air from Falcon Park. The Spikes' radio broadcast can also be heard worldwide through the "Listen Live" link on StateCollegeSpikes.com, provided by the club's flagship radio home, NEWSRADIO 1390 WRSC, as well as the TuneIn Radio app.