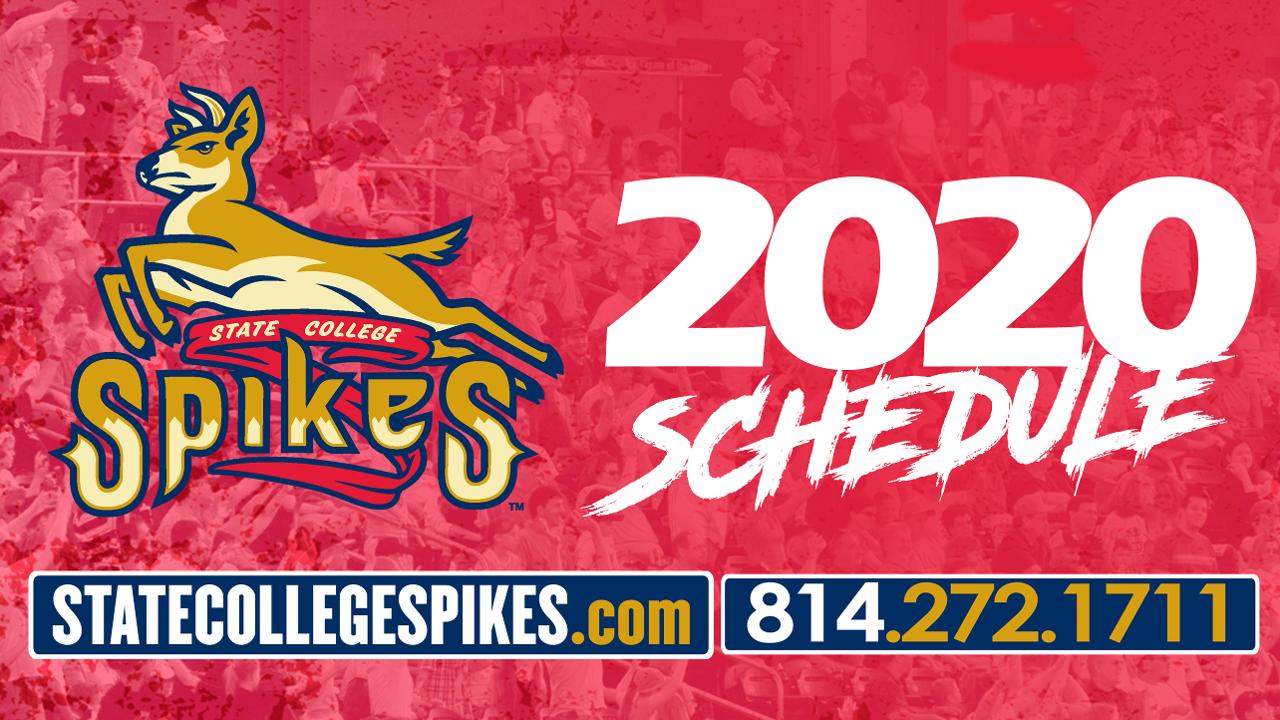 The State College Spikes 2020 schedule has been released by the New York-Penn League. Fans can make sure to catch all 38 home games by purchasing 2020 Season Seat Memberships, now on sale through the Spikes Ticket Office by phone at (814) 272-1711.

The 2020 home slate begins with an Opening Night matchup against the Williamsport Crosscutters (Philadelphia Phillies) on Thursday, June 18. The Spikes and Crosscutters will also meet in a Labor Day matchup on Monday, September 7 to finish the 2020 regular season schedule.

State College and Williamsport are scheduled for a total of 12 matchups in 2020, with the Spikes hosting the Crosscutters for six home games, including a three-game series from August 11-13 and a September 6 matchup immediately preceding the regular season finale.

The Spikes will also clash with more Pinckney Division opponents throughout the 2020 home schedule, as the West Virginia Black Bears (Pittsburgh Pirates) visit Medlar Field at Lubrano Park for a four-game set from July 21-24 and again for a trio of games from August 22-24. The Mahoning Valley Scrappers (Cleveland Indians) will also come to State College for a three-game series from July 10-12.

In addition, the Spikes will host the Batavia Muckdogs (Miami Marlins) in Central PA for a four-game stretch from August 4-7.

The Spikes' interdivisional schedule expands next year, with the Aberdeen IronBirds (Baltimore Orioles) set to make visit to Medlar Field at Lubrano Park for a pair of three-game sets. The first series will take place from June 24-26, and the second from July 7-9.

Fans of the New York Yankees will also be able to see their team's prospects play in Happy Valley as the Staten Island Yankees visit Medlar Field at Lubrano Park for a three-game series from August 28-30. The Lowell Spinners (Boston Red Sox) will also make a road trip to take on the Spikes for three games from July 1-3, with the Tri-City ValleyCats making a visit for three games from August 14-16.

Another interdivision series rounds out the Spikes' home slate, as the Hudson Valley Renegades (Tampa Bay Rays) come to State College from July 28-30.

Outside the Pinckney Division, the Spikes will visit the Tri-City ValleyCats (Houston Astros) from July 4-6 and the Brooklyn Cyclones (New York Mets) from August 19-21 for three games each. The Spikes will also visit Staten Island for four games against the Yankees from July 13-16, followed by a three-game series on the road at the Renegades from July 17-19.

The road schedule is completed with a three-game trip to Aberdeen to take on the IronBirds from July 25-27.

Fans can catch every moment of the family fun and exciting entertainment of the 2020 season and enjoy numerous benefits with Spikes Season Seat Memberships. Season Seat Members get early entry into the ballpark for every game, giving them the first opportunity at many of the Spikes' fantastic giveaways.

Season Seat Memberships are available as either one-year or three-year terms, with a $100 deposit per seat. However, those purchasing a three-year membership do not have to pay for all three years at once. Customized payment plans are also available by speaking with a Spikes ticket representative.

Season Seat Memberships also give Spikes fans a membership in the Extra Innings Club, which grants access to a wide array of exclusive events at the ballpark throughout the year.