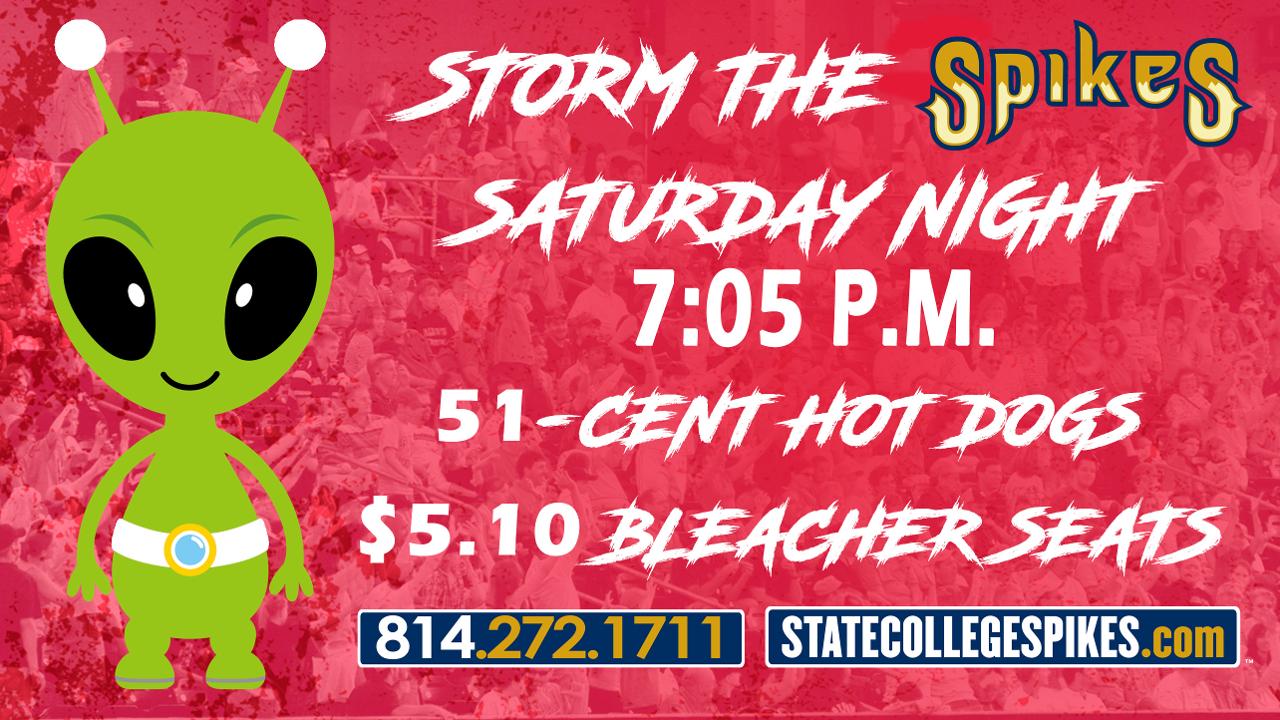 The 50th anniversary of the moon landing is coming up soon, but it's Area 51 that thousands are interested in storming on September 20. With that in mind, the State College Spikes will give fans a chance to get some practice by storming Medlar Field at Lubrano Park's own "Area 51" on Saturday night.

Like the infamously secret Air Force base in Nevada, the Spikes home game will feature out-of-this-world experiences that have never been seen before, like 51-cent hot dogs. Unlike the real Area 51, though, the Spikes are making it easier to storm the ballpark with outfield bleacher seats available for just $5.10.

Signs of previous visits to Earth from those outside our world will also be displayed on the Medlar Field at Lubrano Park video board, giving stormers the chance to "see them aliens" throughout the night.

In addition, the Spikes' nightly 50/50 Raffle will change for one night to the 51/49 raffle, with 51% of the proceeds going to the SETI Institute, which searches the universe for extraterrestrial life.

Plus, select fans will be chosen for a "Naruto run" competition to get some practice in before September.

While the Spikes explore the secrets of Area 51, fans will also be able to explore the vastness of space on Astronomy Night, and look back at when Neil Armstrong and Buzz Aldrin visited the Moon with a Moon Landing 50th Anniversary Celebration.

"We have always been watching the stars on nights at the ballpark and wondering if they were watching us," said Spikes General Manager Scott Walker. "This Saturday, we'll have the chance to welcome all of those seeking to uncover the secrets of extraterrestrial visitors while celebrating mankind's triumphant entry into space."

"And who wouldn't travel millions of miles for 51-cent hot dogs and $5.10 bleacher seats?"

Saturday's events kick off a three-game homestand for the Spikes. Additional highlights include Senior (55+) Prom Night featuring "A Night Under the Stars" Post-Game Senior (55+) Dance on Saturday, Paint the Park Purple Night featuring a post-game FIREWORKS show presented by Home Instead, Juniper Village and Grane Hospice Care on Sunday, and a Monday Buck Night presented by 95.3 FM 3WZ.

Flex Books, Value Plans and an array of group and hospitality options for the 2019 season are currently on sale by calling the Spikes at (814) 272-1711. Click here for additional information on all club ticketing options.