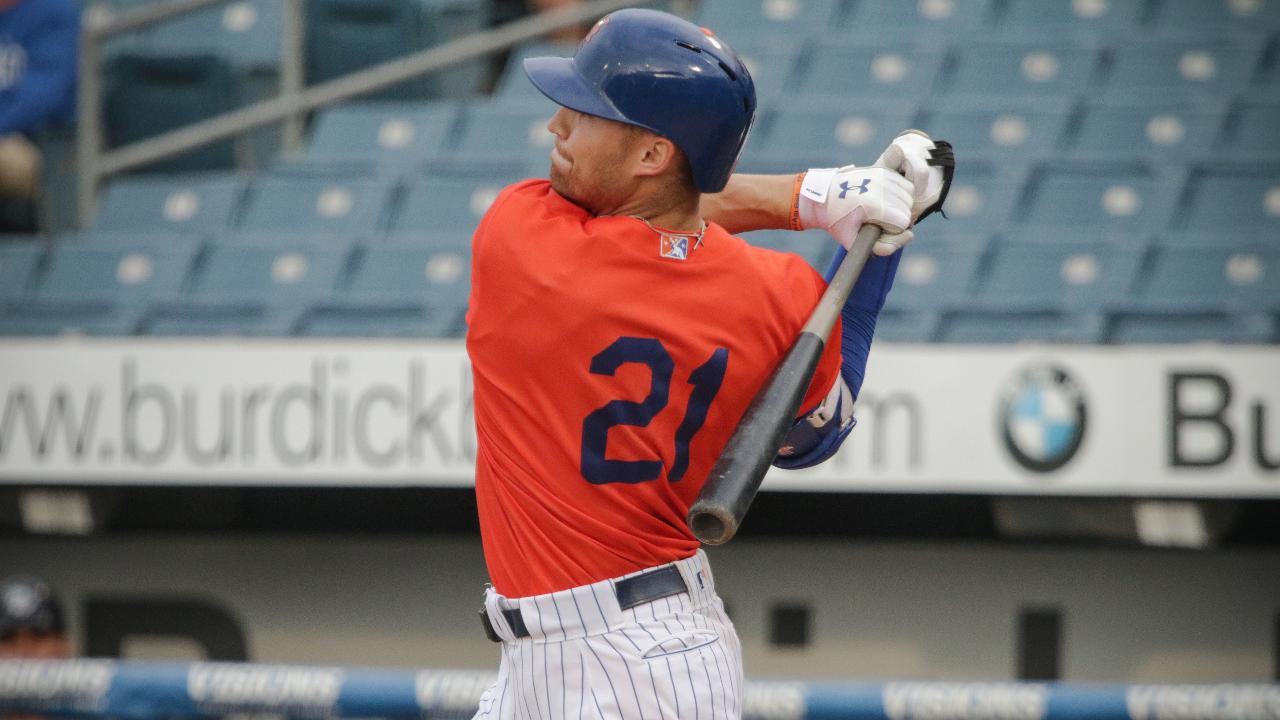 Syracuse, NY - The Syracuse Mets scored early and often en route to an 8-3 win on Wednesday night over the Lehigh Valley IronPigs at NBT Bank Stadium. The Mets are now a half-game back of the Scranton/Wilkes-Barre RailRiders for first place in the International League North division.

Syracuse (72-63) opened the scoring in the bottom of the first inning. Brandon Nimmo singled, Jed Lowrie singled, and Danny Espinosa drove in Nimmo on an RBI double, making it 1-0 Syracuse. The next batter, Dilson Herrera, plated Lowrie from third base on a sacrifice fly to give the Mets a 2-0 advantage. Grégor Blanco followed with a sac fly of his own, scoring Espinosa to put Syracuse up 3-0.

Lehigh Valley (63-71) picked up a run in the top of the second inning. With one out, Austin Listi hit a solo home run to right field, trimming the Syracuse lead to two, 3-1.

The IronPigs got another run in the top of the fifth inning. With two outs, Lehigh Valley starting pitcher Enyel De Los Santos singled and advanced to second base on a wild pitch. Phil Gosselin then drove De Los Santos in on a double, cutting the Mets lead to one, 3-2.

Syracuse responded in the bottom of the fifth. Sam Haggerty led off the inning with a walk. Nimmo then smashed a two-run homer over the center-field wall, extending the Mets lead to three, 5-2.

The Mets kept the bats going in the sixth. Blanco led off with a walk. One out later, Braxton Lee singled to put two runners on before Sam Haggerty plated both Blanco and Lee on a double, putting the Mets in front 7-2.

Rymer Liriano led off the seventh inning with a walk for Syracuse. Travis Taijeron reached on an error, and one out later, Blanco picked up his third walk of the night to load the bases. Arismendy Alcantara then hit a slow ground ball in front of home plate. IronPigs relief pitcher Kyle Dohy fielded the ball and made a flip to Lehigh Valley catcher Davy Grullon for what would have been a force out, but Grullon's foot wasn't on home plate when he made the catch, so Liriano was safe at home to make it an 8-2 ballgame.

In the top of the ninth, José Pirela doubled, and Austin Listi brought him around on an RBI single with one out, cutting the Mets lead to five, 8-3.