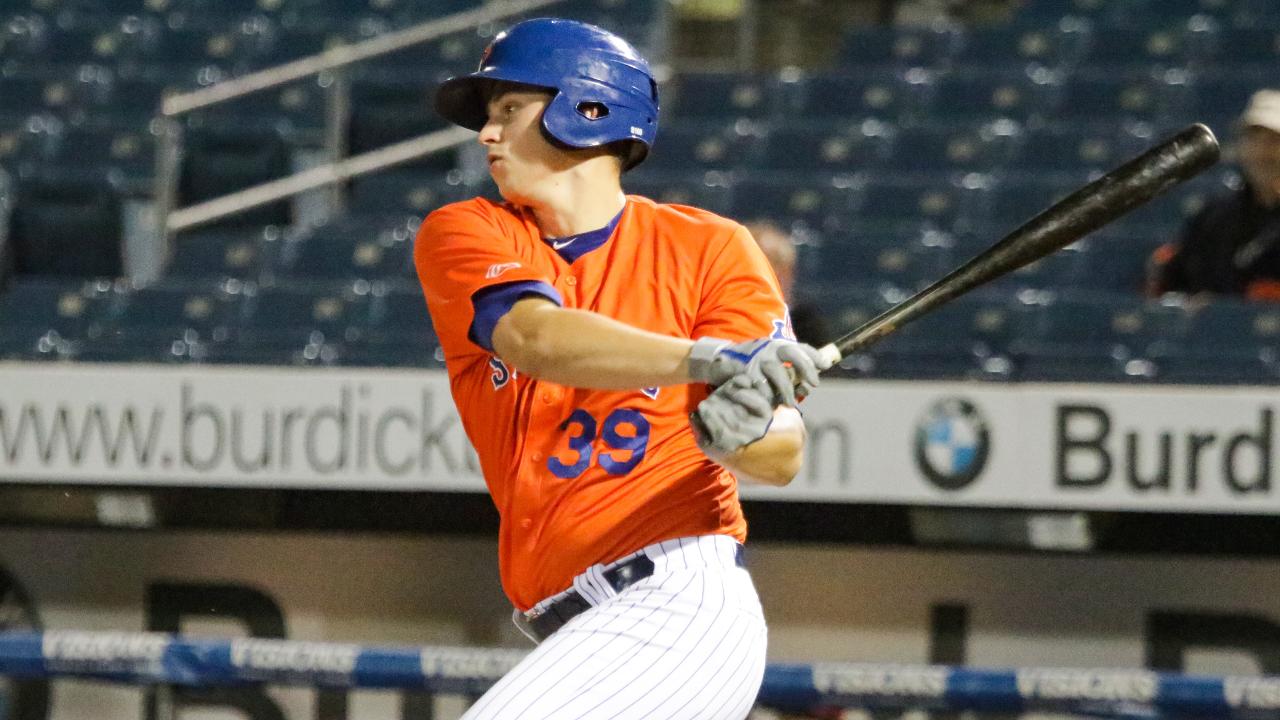 Syracuse, NY - The Syracuse Mets moved into a share of first place in the International League North Division Monday night with a doubleheader sweep of the Lehigh Valley IronPigs at NBT Bank Stadium. Syracuse won the first game, 8-2, and the second game, 3-1. The Mets have now won 12 of their last 13 games.

The first game was a continuation of a suspended game between the Mets and IronPigs from Thursday, August 22nd. On Monday, the game picked up in the top of the second inning with the Mets batting and leading 1-0. Sam Haggerty led off the inning with a double for Syracuse. One out later, pitcher Walker Lockett helped his own cause with a double, scoring Haggerty to put the Mets in front 2-0.

Syracuse (71-62) kept things going in the top of the third inning. With one out, Travis Taijeron was hit by a pitch, and Braxton Lee followed with a single, putting runners on first and second base for Haggerty, who smashed another double, this time bringing home Taijeron from second to give Syracuse a 3-0 advantage. The next batter, Ali Sanchez, plated Lee from third on a sacrifice fly to make it 4-0 Mets.

Lehigh Valley (62-70) answered in the bottom of the fourth inning. José Pirela and Austin Listi singled before Shane Robinson cracked a single of his own, scoring Pirela from second to cut the Mets lead to three, 4-1.

Syracuse extended its lead in the top of the seventh inning. With one out, Taijeron singled, Lee walked, and Haggerty walked as well, loading the bases. One out later, Rymer Liriano walked, scoring Taijeron from third for a 5-1 Mets edge. The next batter, Grégor Blanco, brought home Lee and Haggerty on a single to left field, extending the Mets advantage to six, 7-1. The rally continued when Liriano scored from third on a wild pitch, making it an 8-1 Syracuse lead.

In the bottom of the eighth, Ali Castillo rocketed the first pitch of the frame over the right-field wall for a solo home run, trimming the Mets lead to 8-2.

Lehigh Valley started hot in game two of the doubleheader, loading the bases on two singles and a walk. However, Mets starter Chris Flexen buckled down from there, getting three consecutive outs to get out of the top of the first inning unscathed.

The IronPigs picked up an unearned run in the second inning. Pirela led off with a double, and Malquin Canelo reached on an error before the pitcher, Dan Straily, laid down a sacrifice bunt to move both runners into scoring position with one out. Phil Gosselin followed with a deep fly out to right field, scoring Pirela from third on a sacrifice fly to make it 1-0 IronPigs.

Syracuse countered in the bottom of the second inning. Jason Krizan kicked things off with a double. Two outs later, Liriano extended the inning with a walk. From there, Colton Plaia lined a single, scoring Krizan to tie the ballgame, 1-1. The pitcher, Flexen, followed by helping his cause with a single, plating Liriano from second to give the Mets a 2-1 advantage.

The home team added an insurance run in the bottom of the fifth. With two outs, Danny Espinosa crushed a solo homer, making it 3-1 Mets.

The Syracuse bullpen provided perfect innings from Brooks Pounders, Stephen Nogosek, and Tyler Bashlor to pick up the 3-1 win.

The Mets hosts the IronPigs again Tuesday night. Drew Gagnon will start for Syracuse. First pitch is scheduled for 6:35 p.m.