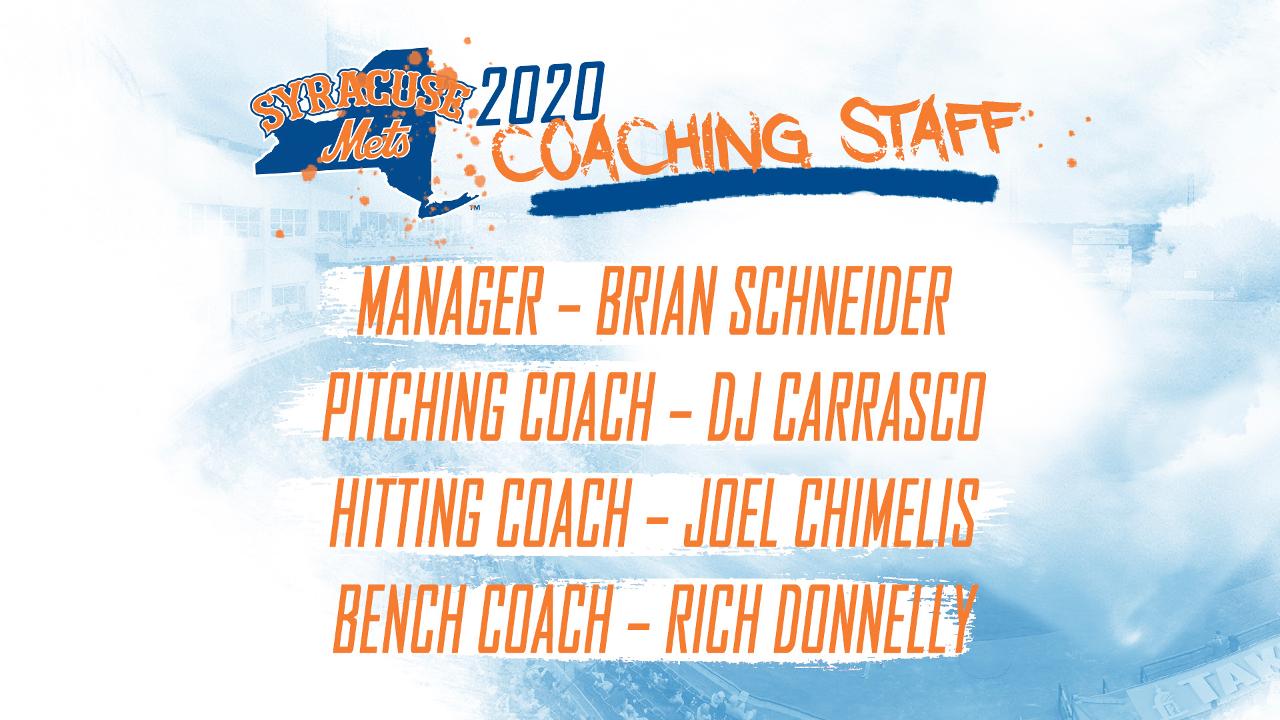 SYRACUSE, NY - The Syracuse Mets are announcing the team's coaching staff for the 2020 season. The Mets previously revealed that Brian Schneider will begin his first season as Syracuse Mets manager in 2020. Pitching coach D.J. Carrasco and bench coach Rich Donnelly are also coming to Syracuse this season for the first time, while hitting coach Joel Chimelis is the lone returning member of the coaching staff from 2019.

Hitting Coach Joel Chimelis returns to Syracuse for his second season in Central New York and his third season at the Triple-A level for the Mets. Chimelis was born in Brooklyn and came to the Mets' organization in 2018 after spending 12 years with the Astros and two seasons with the Montreal Expos/Washington Nationals organization.

Pitching Coach D.J. Carrasco is entering his first season in the New York Mets' organization as a coach. Carrasco pitched in the majors for parts of eight seasons with the Royals, White Sox, Pirates, Diamondbacks, and for the Mets in 2011 and 2012. The 42-year-old has been the pitching coach for New Zealand's first ever professional team that competes in the Australian Baseball League. Carrasco was an advanced scout for the Los Angeles Dodgers and has spent additional time in New Zealand as a pitching coach for a national youth development team.

Bench Coach Rich Donnelly brings a wealth of experience to Syracuse. The Steubenville, Ohio native has coached in the majors for nearly three decades as a first-base coach, third-base coach, bullpen coach, and bench coach. Donnelly was the third base coach for the Florida Marlins when they won the World Series in 1997. In addition to his experience in the majors, Donnelly has coached in the minors for more than a decade. In the New York Mets' organization, Donnelly managed the Brooklyn Cyclones, the short-season A affiliate of the Mets, from 2011-2013, was the bench coach in Brooklyn in 2018, and managed the Kingsport Mets, a rookie-level affiliate of the Mets, in 2019.

As previously announced, Manager Brian Schneider comes to Syracuse and the New York Mets' organization after spending the last six years as a coach in the Miami Marlins' system. The Florida native managed the Jupiter Hammerheads, the Advanced-A affiliate of the Miami Marlins, in 2014 and 2015 before becoming the catching coach on the major league staff for the Marlins from 2016-2019 alongside Marlins manager Don Mattingly. As a player, Schneider was a catcher for 13 years in the majors between the Montreal Expos/Washington Nationals, New York Mets, and Philadelphia Phillies. Schneider's time with the Mets was during the 2008 and 2009 seasons.

The Syracuse Mets open the 2020 season on the road on Thursday, April 9th against the Pawtucket Red Sox. Syracuse's home opener is on Friday, April 17th at NBT Bank Stadium against the Scranton/Wilkes-Barre RailRiders. For ticket information, go online to SyracuseMets.com or call 315-474-7833.