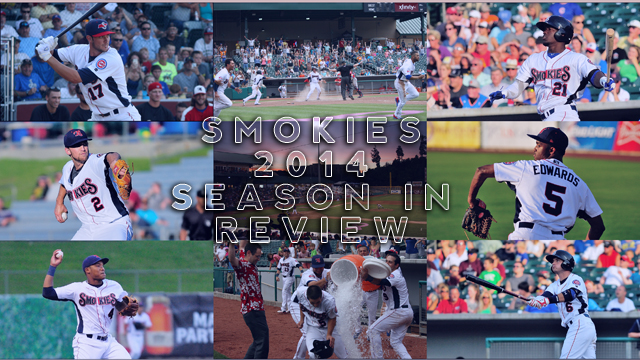 ORGANIZATION OF THE YEAR: Following the conclusion of the 2014 campaign, the Southern League announced the Smokies as the circuit's 2014 Don Mincher Organization of the Year...The club is also the league's nominee for the John H. Johnson President's Award, handed to the best organization in Minor League Baseball...The Smokies won that honor in 2011 and are still the only Southern League team to have won the award.

SMOKIES SET ATTENDANCE RECORD: The Smokies this season welcomed a franchise-best 283,083 fans through the gates of Smokies Stadium...That mark breaks the previous record of 278,033 fans that came entered the ballpark during the 2002 campaign...The club also averaged 4,102 fans over 69 openings, marking the first time the Smokies have welcomed over 4,000 guests per opening in club history.

ANOTHER WINNING YEAR IN KODAK: Tennessee finished the 2014 season with a 36-34 record at Smokies Stadium, marking the 11th time in 15 seasons the club has compiled a winning record in Kodak...Since beginning play at the ballpark in April 2000, the team has posted a 568-478 record (.543) in 1,046 regular season home contests...The Smokies played their 1,000th home game at Smokies Stadium on May 24.

PLAYER OF THE YEAR: INF Kris Bryant cleaned up with postseason awards, racking up Minor League Player of the Year honors from USA TODAY, Baseball America and Yahoo Sports...Bryant is the first Smokies player to be honored with that top honor from any of those publications...In addition, INF Addison Russell, OF Jorge Soler and RHP Armando Rivero were recognized by Yahoo Sports as honorable mentions for the publications Minor League All-Star Team.

WE HEARD YOU LIKE PROSPECTS...: Over the course of the 2014 campaign, six of Baseball America's Top 100 Preseason Prospects played in a Tennessee Smokies uniform... INF Kris Bryant (No. 8), RHP C.J. Edwards (No. 28) and OF Jorge Soler (No. 41) began the year with the club, and would later be joined by RHP Pierce Johnson (No. 87), INF Addison Russell (No. 14) and OF Albert Almora (No. 36)...Russell began the year as the top prospect in the Oakland Athletics organization before being acquired by the Cubs via trade from Oakland and assigned to Tennessee on July 5 in a deal that in part sent former Smokies RHP Jeff Samardzija to the Athletics.

CONTRIBUTING CALL-UPS: Soler was one of three 2014 Smokies who were promoted to the Chicago Cubs this season, along with CRafael Lopez and RHP Arodys Vizcaino..Soler made his Major League debut on August 27 at Great American Ballpark in Cincinnati, Ohio, and homered in his first at bat...The 22-year-old became the first Cub to leave the yard in his first Major League at bat since former Smokies INF Starlin Castro accomplished the same feat as part of a six-RBI debut on May 7, 2010, which also took place at Great American Ballpark in Cincinnati.

CHICKS DIG THE LONGBALL: Tennessee totaled 100 home runs this season, marking the fourth time in five years the club has totaled a triple-digit total for roundtrippers...Exactly half of those 100 longballs were solo shots...20 different Smokies batters left the yard this year, topping 2013's total of 15...INF Kris Bryant's 22 big flies led the way, while INFs Dustin Geiger and Addison Russell tied for second on the team with 12.

HEY NOW, YOU'RE AN ALL-STAR: Eight Smokies players were honored as Southern League Mid-Season All-Stars, including pitchersCorey Black, Hunter Cervenka, P.J. Francescon and Armando Rivero, C Rafael Lopez, infielders Stephen Bruno and Kris Bryant, and OF John Andreoli...Andreoli and Bryant were named starters, though Andreoli did not play due to injury...Bryant would also win the league's Home Run Derby, which was held on June 16 at Historic Engel Stadium in Chattanooga, by combining to slam 16 longballs over three rounds, including eight in the first round.

WEEKLY HONORS: A total of five Smokies players were named a Southern League Player of the Week throughout the 2014 campaign, including INF Kris Bryant, who received Hitter of the Week honors during three separate weeks (May 5-12, May 26-June 2, June 2-9)...In addition, outfielders Rubi Silva (June 16-23) and Jorge Soler (July 7-14) were named Hitter of the Week...Starters Corey Black (April 21-28) and Dae-Eun Rhee (June 23-30) were tabbed Pitcher of the Week during the season as well.