On the Road: No straight path for Flores

Amarillo's fielding coach went from indy ball to softball and back 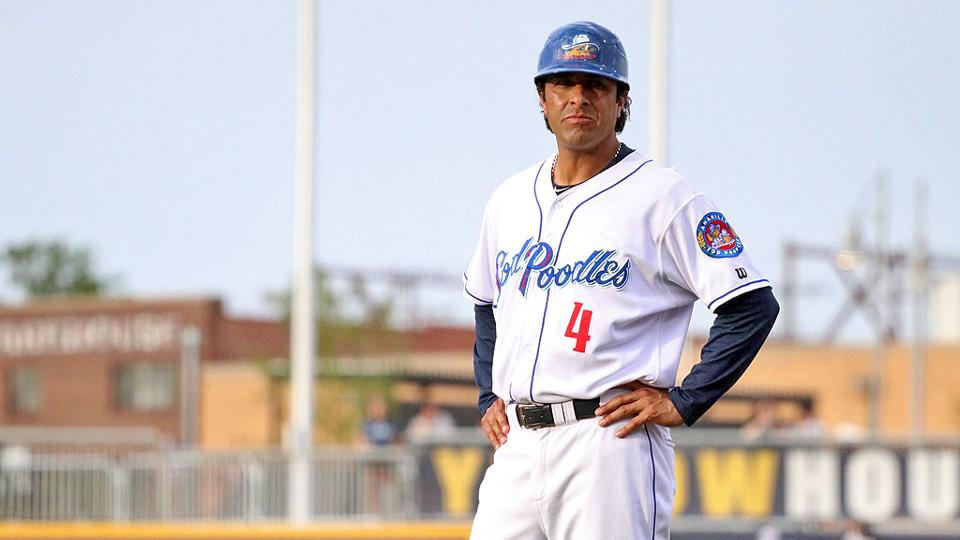 After a long and unpredictable baseball journey, Freddy Flores is serving as fielding coach for the Amarillo Sod Poodles (Ben Jenkins)

Freddy Flores played his first season in independent ball at the age of 23, and his last at the age of 42. Name a position, he's probably played it. Name a small to mid-sized American city, he's probably played there (or at least driven by it while en route to somewhere else). Flores -- now the fielding coach for the Amarillo Sod Poodles -- is a jack-of-all-trades baseball lifer, proud to have carved out a career spent largely on the margins.

"It's just the grind. That's where you understand your path and your roots and where you come from," he said, speaking at Amarillo's HODGETOWN ballpark prior to a game last month. "And I know everything I had to go through and what I had to endure and the amount of times I was told, 'You're too old. You can't do it.' I had pretty much been told that through my entire lifetime. Through high school it was like, 'You can't play college baseball.' I played college baseball. 'You can't play professional baseball.' I did it. So I've always had the mindset where if somebody tells me I can't do it, well, then let's prove 'em wrong."

Flores didn't break into the affiliated ranks until 2017, at the age of 43, when the San Diego Padres hired him to be the fielding coach of the Class A Advanced Lake Elsinore Storm. He returned to Lake Elsinore in 2018, and this season he's in the same role with the Double-A Sod Poodles. Almost inevitably, this isn't the first time Flores has been in Amarillo. He played there in 2013 with the Sox and 2015 with the Thunderheads, both of which were independent league teams operating out of Potter County Memorial Stadium. In 2015, during Flores' second Amarillo go-round, he was simultaneously employed as hitting coach and pitcher (he made 25 appearances on the mound). Potter County Memorial Stadium is located less than two miles from HODGETOWN, but the two facilities are worlds apart when it comes to their amenities and atmosphere.

"For me it was a gut check each and every day, especially here in Amarillo," said Flores, a native of Silver City, New Mexico. "I love Amarillo for what it was when I played here and what it's become now. You really had to understand why you were doing it each and every day. And my drive was always my passion for the game of baseball and at the time, that was my only job opportunity. So I looked beyond our facilities, the field conditions, and just kind of had the outlook that I'm happy to be here. I know what it's like to not have the game of baseball, so there was a level of appreciation."

Flores does it "each and every day" in memory of his father, Freddy Sr., who passed away in 2006.

"He brought me up to be a baseball player. That's all he ever wanted me to do," he said. "So it's been instilled in me, the game, from a young age."

Flores played collegiately at New Mexico Highlands University, a Division II school. He played well there, particularly during his junior year, and said that "there was always the anticipation" of getting drafted. It didn't happen, but Flores went from college ball to the independent Frontier League, logging time in Sioux City, Iowa (1997), Chillicothe, Ohio (1998) and Richmond, Indiana (1999-2000). From this he transitioned into coaching Division II softball at Western New Mexico University, spending two years as an assistant and then seven as the head coach.

"I wanted a house, I wanted a car. I wanted all of those things. So it just felt that it was a good opportunity to be a head softball coach at 24 years old," said Flores. "I jumped at it, and did it, and was fortunate enough to be successful at what I was doing. But my dad, he had planted the seed. On the morning that he passed, we were working on the [Western New Mexico University softball] field. He told me that I'd done a great job with the softball program -- I took a team to the World Series in 2004 -- but that I'd reached the pinnacle of where I could take it. He felt like I'd given up on baseball. He was right. He told me that baseball isn't going to come and find me, that the way I sold the program is the way I needed to sell myself."

Soon after that conversation, Freddy Flores Sr. collapsed on the field; he died at the hospital that same day. In the wake of that tragic and wholly unexpected moment, his son rededicated his life to baseball. Flores was in his mid-30s and knew that his road back to professional baseball wouldn't be easy.

Freddy Flores honors his father's memory with a dedication to baseball. (Ben Jenkins)

"I went to a tryout in Atlantic City [for the Surf], after being at two previous ones that didn't work out. But I knew that I had caught [manager Cecil Fielder's] eye defensively," said Flores. "My hands were still good. I could still field it. But I was a little slow with the bat and I knew that. So I grabbed him, just to say, 'Hey, I can hit a fungo. I can throw BP.'

"I just started volunteering my time as one of his assistants, like volunteer coach, and then before you knew it, I played right field for him one game and went 3-for-5. Ended up getting released the next day. And then two weeks later ... [Fielder] asked me, 'We're short on pitching. I know you can pitch.' So I threw a side for him and five days later I got my first professional start. First hitter I ever faced, gave up a home run over the left field scoreboard at Yogi Berra Stadium there in [Little Falls] New Jersey. But I had only two hits that I gave up. A home run and a broken bat single -- five innings, five strikeouts, no walks -- and got my first professional win. And the next day I got released."

"[My father] was my motivation, my drive," he said. "And that was the beauty. I could feel the connection. ... My parents are hard-working people and they taught me the work ethic at a young age and that's what it is. And still, where I am in my journey, my drive is still to get to the big leagues. The next best thing is to get there as a coach."

Freddy Flores persevered through a long grind to get into affiliated baseball. (Ben Jenkins)

Flores said being back in Amarillo, in the affiliated ranks, at a sparkling new ballpark, "feels like a dream."

"When the [new ballpark initiative] went through and the city approved it, I was tickled to death," he said. "Now, did I have any idea that I'd end up here? The beauty of this great journey that I've been on is that I end up back in Amarillo. They've always had an appreciation for it. They've always embraced their baseball, so it's only fitting that they have a nice facility like this to really embrace the game and embrace the Padres.

"But I've gone back to the old stadium since I've been here. ... Just a good reminder of where you came from and where you are now. The idea's to always get better each and every day. It seems like I'm moving in that direction, so I've just got to be thankful and count my blessings."

Counting his blessings doesn't mean resting on his laurels, of course. Despite how long and unpredictable his journey has been, Flores feels that there is still a long, long way to go.

"Whatever they want me to do, I'm going to do it and be as best as I can with it," he said. "That's the beauty of what I've been able to do and that's why I'm thankful to the game. Along the way I've failed quite a bit, but you learn a lot through failing. You always pick yourself up, dust yourself off and keep moving forward."