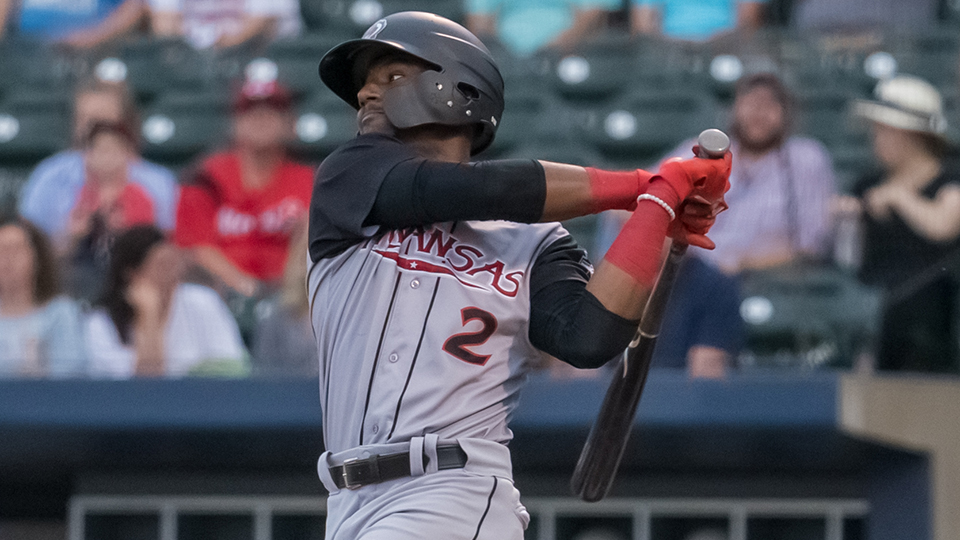 With Arkansas' season hanging in the balance, Kyle Lewis helped extend it with one swing of the bat.

The 10th-ranked Mariners prospect hit a go-ahead solo homer and singled as the Travelers forced a decisive fifth game in the Texas League semifinals with a 4-1 triumph over Tulsa on Saturday night at ONEOK Field.

Arkansas scored all of its runs via the long ball to stave off elimination. The game was scoreless until the fifth, when Logan Taylor picked an opportune time for his first hit of the series. He took Drillers starter Parker Curry over the fence in right-center field on a 2-2 pitch for a solo homer.

The lead proved short-lived. In the sixth, Mariners No. 29 prospect Ljay Newsome issued a leadoff walk to Jordan Procyshen, who was sacrificed to second by Dodgers No. 6 prospect Jeter Downs. With two outs, Chris Parmelee lined a single to right to tie it.

That set the stage for Lewis, who had singled off Curry (0-1) in the fourth.

"He was mixing pretty good all game, mixing his sequence up," the 24-year-old said. "I was trying to be ready to go early. He was only giving like one good pitch to hit all night, so I was trying to make sure I didn't miss that opportunity."

The right-hander's first pitch in the seventh, a fastball over the outer part of the middle of the plate, would be his last for the night as Lewis launched it into the Oklahoma night to put the Travelers ahead for good.

"I was just excited," the 2016 first-round pick said. "The whole series has been so close. Every run is precious, so getting a run in the seventh was a big shot in the arm."

Lewis has hit safely in all four games in the series, notching multi-hit efforts in three of them to raise his average to .467 after he hit .239 in 109 at-bats against Tulsa during the regular season.

"That's just the way it goes in baseball, it's hot and cold," he said. "Sometimes the ball bounces your way, and I've just been trying to get my swing off, swing it with confidence and try to find a way to help the team.

Tulsa loaded the bases in the seventh with three one-out singles against Wyatt Mills (1-0), but Sam Delaplane came in and retired Procyshen and Downs to end the threat. An inning later, M's No. 4 prospect Evan White drilled a two-run dinger to right off Jordan Sheffield to complete the scoring.

"He'd been putting good swings on the ball all night, so we knew one of those was coming," Lewis said of White. "As soon as he got a hold of it, we knew it was out."

Game 5 is Sunday afternoon in Tulsa.

In other Texas League playoff action:

Amarillo scored on a wild pitch in the first inning and added two runs in the fourth on a single by Peter Van Gansen to force a deciding Game 5 in the other semifinal series. Chase Calabuig's RBI single got Midland on the board in the seventh, but the Sod Poodles struck right back in the eighth on a run-scoring double by Padres No. 10 prospect Owen Miller and an RBI single by Luis Torrens. Jesse Scholtens pitched 5 2/3 scoreless innings, allowing four hits and a walk while striking out seven for Amarillo. Game 5 is Sunday at Midland. Gameday box score