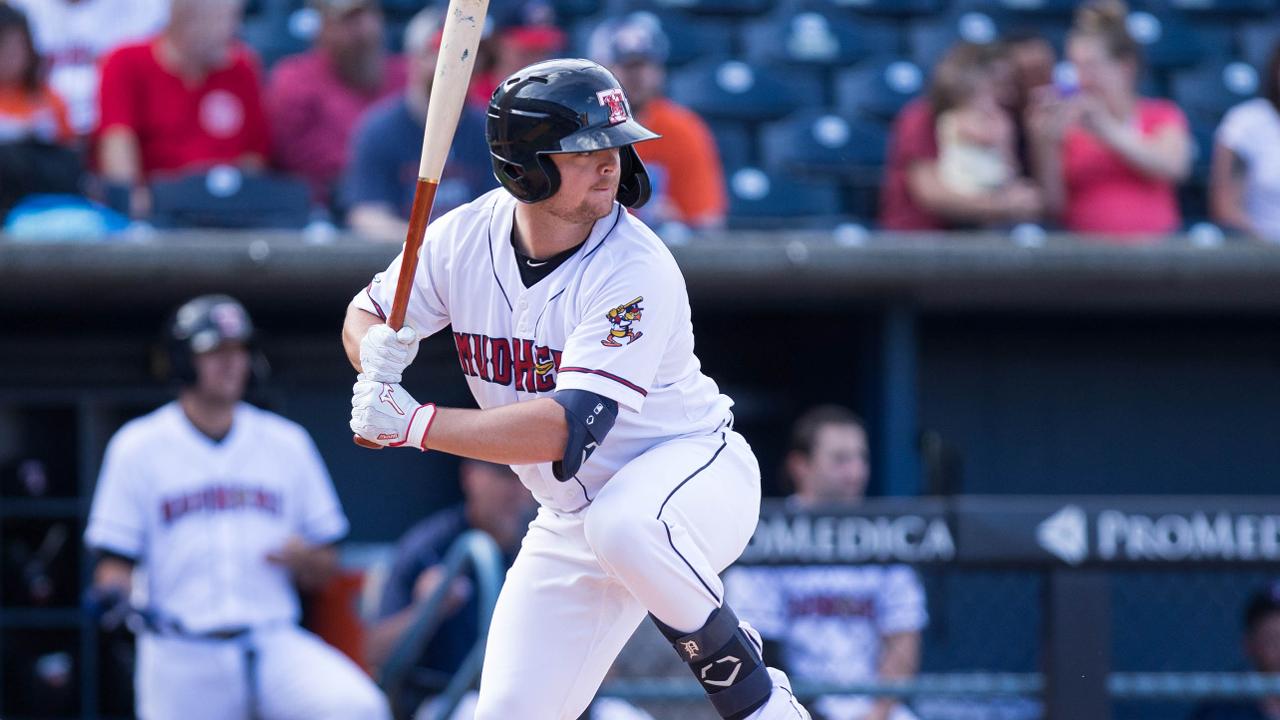 Toledo, Ohio - The Toledo Mud Hens and Syracuse Mets concluded their weekend series on Sunday at Fifth Third Field with Toledo picking up a 7-2 win behind a grand slam by Jake Rogers.

In the fourth inning with a 2-0 lead, Ronny Rodriguez led off by reaching on an error, allowing him to go to second. Pete Kozma and Daz Cameron would draw walks to load the bases for Jake Rogers who would knock a grand slam, giving Toledo a commaning 6-0 lead. The grand slam is the first for Toledo since June 3 when Dustin Peterson hit one against Columbus.

The Mets logged the first hit of the game in the top of the first with Ruben Tejada knocking a double down the left field line off of the Hens' starter Ryan Carpenter. However, Tejada would be thrown out at third on a delay steal attempt. A groundout and a fly out would end the top of the inning.

The Hens also registered a hit in the first, coming off the bat of Dawel Lugo for a triple to the right-center gap. Willi Castro would then single to shallow left field to score Lugo, giving Toledo an early 1-0 lead.

To begin the top of the second, Dilson Herrera reached first on a hit by pitch with both benches being warned after. Travis Taijeron would also reach on a hit by pitch to put two on for Syracuse, but a strikeout and 5-4-3 double play would end the inning.

Toledo kept the bats warm in the second inning with Victor Reyes leading off with a double. Reyes would move to third with a single by Peterson. For Syracuse, Tim Tebow would exit the game with a cut to his throwing hand. Cameron would also double down the right field line before the inning would end with Toledo leading 2-0.

The next action would come in the bottom of the fourth for Toledo. To begin the inning, Rodriguez reached on an error down the left field line. Rodriguez would move up to third on a wild pitch that would also be counted as ball four to Kozma. Kozma would then notch his first stolen base of the season to put runners at second and third with two outs. Cameron would then walk to load the bases, setting up a grand slam by Rogers, his eighth home run of the season, to give Toledo a 6-0 lead after four innings.

Syracuse would see runners again the top of the fifth. Arismendy Alcantara walked followed by a single to Rymer Liriano. Danny Espinosa then hit a ball to the right field wall, but a leaping effort by Reyes resulted in an out with Alcantara tagging and moving to third to put runners at the corners with one out. A fly ball by Colton Plaia would allow Alcantara to score, cutting the Toledo lead to 6-1. Carpenter would use a pick-off move to get Liriano at first to end the top half of the inning.

Gregor Blanco would open the sixth inning with a triple to the right-center gap, his second of the series. Blanco would then score on a groundout by Tejada to move the score to 6-2 Toledo. Rene Rivera would then reach on a walk, but a strikeout and groundout would end the half of the inning.

In the bottom half of the sixth, Peterson logged his second single of the night, coming with one out. Peterson would be forced out on a fielder's choice groundball with Kozma safe at first. With a rip up the middle, Cameron would single and move Kozma to third for runners at the corners before Syracuse would make a change on the mound.

Paul Sewald would enter for Syracuse replacing the starter Drew Gagnon. Gagnon lasted 5.2 innings, allowing nine hits and walking two resulting in six runs while throwing one wild pitch and not striking out a batter.

To welcome Sewald, Cameron would steal second base, his 12th of the season, before Sewald registered a strikeout to end the inning.

Toledo would also make a pitching change coming at the top of the seventh with John Schreiber entering the game. In the start, Carpenter went 6.0 innings, striking out five while allowing two runs on three hits, three walks and two hit batters.

Alcantara would notch the second triple of the game for the Mets to begin the top of the seventh. Liriano would then reach on a walk to put runners at the corners for Syracuse. However, a lineout on a jumping effort by Kozma followed by two strikeouts would end the inning.

Danny Woodrow would lead off the bottom of the seventh with a bunt single, but he would be thrown out trying for second during Castro's at-bat. Castro would then double off the left-center wall, but a strikeout would end the seventh.

Eduardo Jimenez entered for Toledo in the top of the eighth, replacing Schreiber who allowed one hit and walked one while striking out two. Jimenez would log two strikeouts in the inning.

Ryan O'Rourke entered in the bottom of the eighth for Syracuse, replacing Sewald who went 1.1 innings, striking out two while giving up two hits. O'Rourke was welcomed by Reyes before stealing second, his eighth of the year. Kozma then drew a walk to put two on with one out. Reyes would then steal third, his second of the inning. Cameron would double down the left field line to score Reyes, but Kozma would be thrown out at home followed by a strikeout to end the inning with Toledo leading 7-2.

In the top of the ninth, Jose Cisnero would take the mound for Toledo replacing Jimenez. After striking out the first batter, Alcantara reached on a single, but another strikeout and groundout would end the game with Toledo winning 7-2.

Toledo will have an off day on Monday before beginning a road trip on Tuesday. The first stop will be in Lehigh Valley for a 7:05 p.m. start on Tuesday. That series will last through Thursday before the Mud Hens travel to to face the Mets again, this time in Syracuse. Tim Adleman is scheduled to start for Toledo on Tuesday while Ramon Rosso is set to take the hill for Lehigh Valley.

- Being called up to start in Detroit today, Tyler Alexander tossed 7.0 innings for the Tigers, allowing one run on three hits and one walk while striking out one. He left with a 3-1 lead, but would see a no decision on his line.

In the corresponding move for Alexander being called up, Zac Reininger rejoined the Mud Hens roster.