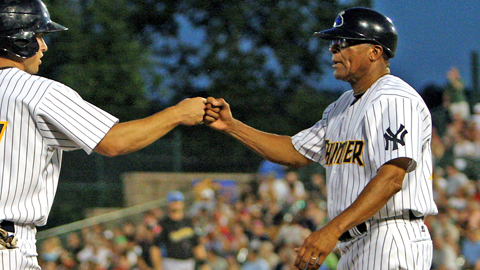 (Trenton, NJ)- The Trenton Thunder, the Double-A affiliate of the New York Yankees, announced on Thursday that Tony Franklin will return to ARM & HAMMER Park to manage the Thunder for an eighth consecutive season. Franklin, already the longest tenured skipper in the Thunder's 20 year history, is coming off his third Eastern League championship.

"Tony Franklin is a great asset to the Thunder and our community," said Thunder General Manager Will Smith. "The success that we've enjoyed on the field during his tenure is unprecedented and we're excited to see Tony back to defend last season's championship."

The 2013 Eastern League Championship was Franklin's fourth title as Manager. In 1993, he led South Bend (Single-A affiliate of the Chicago White Sox) to the Midwest League championship. Prior to his time in Trenton, Franklin was the Minor League Infield Instructor for the San Diego Padres. His managerial career began with the White Sox organization as the Manager for Geneva (NY) of the New York-Penn League in 1982. Franklin spent four seasons in Geneva, making the playoffs in 1985. After one season with Wytheville (Appalachian League), he guided the White Sox affiliate in the Florida State League, the Sarasota White Sox, to a playoff appearance in 1989. Franklin spent two years as the skipper of the Birmingham Barons of the Southern League, including 81 wins in 1991 and a berth in the Championship Series.

Tommy Phelps will return for his sixth season as the Pitching Coach for the Thunder. Phelps pitched for the Florida Marlins in 2003 and 2004 including a 2003 season in which he went 3-2 with a 4.00 ERA in 27 games (seven starts). He was part of a Marlins team that won the World Series over the Yankees. Phelps pitched in 29 games for Milwaukee in 2005 and went 7-4 with a 4.45 ERA in 2006 with Columbus (Triple-A affiliate of the New York Yankees). Phelps was originally an eighth round pick by Montreal in the 1992 draft.

Orlando Crance returns to Trenton for a second season as Strength and Conditioning Coach. He served in the same capacity for the Florida Marlins AA affiliate in Jacksonville, Florida in 2010 and previously for the Savannah Sand Gnats (Class A, Mets).

The Thunder will begin the 2014 season at ARM & HAMMER Park on Thursday, April 3. Season tickets, group outings, Pic-A-Plans, and Mini Plan renewals are on sale now. Single game tickets will go on sale on March 1, 2014. For more information about tickets, fans should call 609-394-3300 or visit trentonthunder.com.