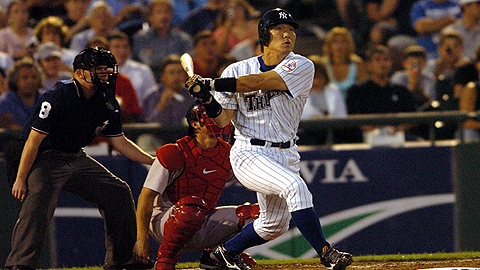 (TRENTON, NJ) - On July 28 at Yankee Stadium, 2009 World Series MVP Hideki Matsui officially retired from Major League Baseball as a member of the Yankees. On Wednesday, August 28, the former Yankee great will be honored by the Thunder as well. Hideki will throw out the ceremonial first pitch before the Thunder take on the New Britain Rock Cats and he'll be wearing the same Thunder jersey and hat from his rehabilitation assignment with Trenton in 2006.

During the game, six lucky Thunder fans will win autographed Hideki Matsui items. The items include 3 Yankees Magazines with Hideki on the cover, an autographed picture of him with the Thunder in 2006, an autographed baseball, and a very rare dual Yankees World Series MVP baseball signed by both Hideki and Hall of Famer Reggie Jackson.

August 28 is Verizon Wireless Night at ARM & HAMMER Park and the Thunder will be giving out statues of Hideki's former Yankees teammate Andy Pettitte to the first 2,000 fans ages 14 and over.