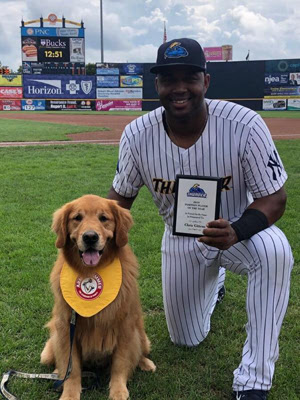 The Thunder, presented by NJM Insurance, are pleased to announce that INF  has earned the OxyClean "Dirtiest Uniform of the Season," RHP  has been named the Thunder's Pitcher of the Year, INF  has been named the Thunder's Position Player of the Year and C Jorge Saez has received the 2019 Samuel J. Plumeri Community Service Award. The Pitcher and Player of the Year Awards were selected by a fan vote and the OxyClear "Dirtiest Uniform Award" and Community Service Award were selected by the Thunder Front Office.

Chris Gittens earned the Position Player of the Year Award in his second season with the Thunder. Gittens was named to the Eastern League's All-Star Team during the season and Postseason All-Star Team and became the second player in franchise to earn the league's MVP award after Brandon Laird took home the hardware in 2010. Gittens's two-time All-Star selection made him the 16th player in franchise history to be selected to both Eastern League All-Star Teams. This season, the Thunder's first baseman has hit a career-high 22 home runs and leads the Eastern League in home runs (22), RBI (76), on-base percentage (.392), slugging percentage (.494), and on-base plus slugging (OPS, .886) and is fourth in the league in batting average (.281). Gittens, New York's 12th round selection out of Grayson JC (TX) in 2015, is a native of Sherman, TX.

Saez earned the Samuel J. Plumeri Community Service Award for his participation in the Miracle League's All-Star Game this summer. Saez has been a regular attendee at Miracle League events during his tenure with the Thunder and his commitment to the league this year was unparalleled.

The Thunder head to the postseason for the fourth straight year and will begin a best-of-five series with the Reading Fightin Phils on Wednesday. Tickets and game times are available online at www.TrentonThunder.com.