Thunder Named "Team of the Year" 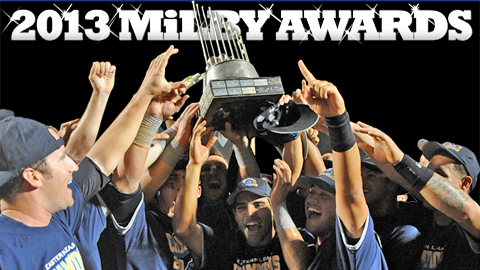 (TRENTON, NJ) MiLB.com, the official website of Minor League Baseball, has named the Trenton Thunder, Double-A affiliate of the New York Yankees, "Team of the Year" following a three week online voting period this month. The honor is part of the annual "MiLBY" Awards which are presented by MiLB.com each fall.

The Thunder were the champions of the Eastern League after earning the East Division Wild Card during the regular season. Trenton got hot at the end of the year and finished on a nine-game winning streak including sweeps of the first place Binghamton Mets in the Eastern Division Championship and the Western Division Champs, the Harrisburg Senators, to earn the title. Trenton became the first team to sweep both rounds of the EL postseason since 1991.

The title is the franchise's third in its 20 seasons in Trenton, all under the watch of Manager Tony Franklin. In Franklin's seven years with the Thunder, he has led them to the EL Championship Series five times.

MiLBYs are the end-of-season awards that honor the best players, teams and performances of the Minor League season. For three weeks, fans chose their favorites in 13 categories at milb.com. The official website of Minor League Baseball announces Fans' Choice winners as well as MiLB.com staff picks for the major awards.

Trenton is a finalist for two additional MiLBY Awards that will be announced on Thursday, October 31. The Retirement Party for Chase That Golden Thunder is a nominee for "Promotion of the Year" and a tribute video for Chase is up for "Mascot Clip of the Year".

The Thunder will begin the 2014 season on at home on Thursday, April 3. Season tickets, group outings, Pic-A-Plans, and Mini Plan renewals are on sale now. For more information about tickets, fans should call 609-394-3300 or visit trentonthunder.com.