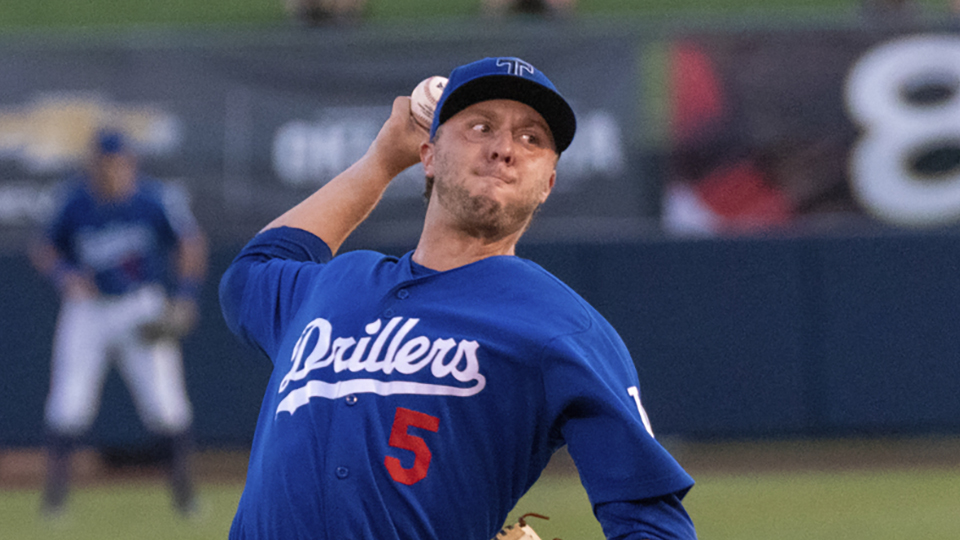 Parker Curry surrendered a pair of solo home runs and suffered the loss in Saturday's Game 4.

TULSA - The 2019 Texas League Championship will come down to one, winner-take-all game Sunday afternoon at ONEOK Field. The Amarillo Sod Poodles fought off elimination Saturday night and kept the Tulsa Drillers from claiming a second straight title with a 3-0 victory in downtown Tulsa.

Sunday's Game 5 will determine the 2019 Texas League Champion. If the Drillers win, it would be their second straight title and the first-ever crown they have won on their home field. If Amarillo wins, it would cap a memorable beginning for the franchise with its first title coming in its first year of existence.

Facing elimination with a loss, Ivan Castillo got the Poodles off to a perfect start in Saturday's Game 4. As the second batter in the game, Castillo hooked a drive off the right field foul pole for a solo homer that gave Amarillo the 1-0 lead.

Buddy Reed doubled the margin the next inning. His one-out solo homer put the Sod Poodles up 2-0.

A pair of defensive miscues from the Drillers gave Amarillo another insurance run in the sixth inning. Miller led off with a grounder to short that Jeter Downs misplayed for an error. After a walk and a fly out, Peter Van Gansen hit a bouncer to Omar Estevez at second. Estevez turned and threw wide of second and into left field, allowing Miller to race home to make it 3-0.

One night after scoring just two runs in a Game 3 victory, the Drillers were blanked on just seven hits by a trio of Amarillo hurlers. Starter Jesse Scholtens gave up five hits and three walks in five scoreless innings, and relievers Jordan Guerrero and Travis Radke took it from there. Guerrero recorded five outs and Radke got the final seven to pick up the save.

The Drillers had opportunities, putting the leadoff man on base in the third, fourth and fifth innings, but could not score. In the fourth, they loaded the bases with just one out, but pinch-hitter Jared Walker struck out and Downs flied out.

Drew Avans pinch hit to lead off the seventh inning and hit a deep drive to right field, but he was robbed of a home run on a leaping grab at the fence by Edward Olivares.

*Starting pitcher Parker Curry was charged with the loss. He worked the first four innings and surrendered the two solo home runs.

*Connor Wong and Donovan Casey both extended their postseason hitting streaks with one hit each. The two have now both hit safely in all nine of Tulsa's playoff games, the only players to do so.

*Amarillo has announced that Aaron Leasher will be the starting pitcher for Sunday's Game 5, but the Drillers will likely see Game 1 starter Lake Bachar at some point. Bachar worked four innings in the opener, and with the day off in the series, the right-hander would be on a normal four days of rest.

*Tickets for Sunday's finale will be available at the ONEOK Field Ticket Office starting at 10 a.m. Sunday morning. It's a Kids Free Day with free tickets for all fans, ages 14 and under.