Drillers Donate Over $20,000 to Tornado Relief

Donation to be made to the American Red Cross Tulsa Office 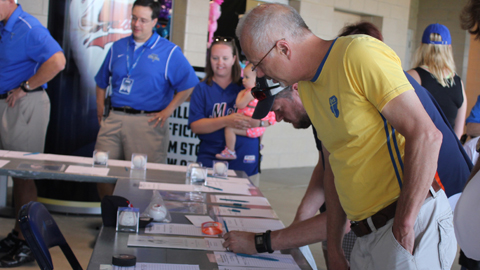 Fans mull over memorabilia Friday, May 25 during one of two in-game silent auctions held by the Drillers at ONEOK Field to raise money for Oklahoma Tornado Relief. The Drillers raised over $10,000 and donated another $10,000 to the American Red Cross.

The Tulsa Drillers have announced a donation of $20,375.94 to the American Red Cross to directly benefit Oklahomans who were impacted by the recent tornadoes that struck the communities of Moore and Shawnee.

"The Drillers are happy to play a small part in the relief efforts," said Drillers General Manager Mike Melega. "Our entire organization is so appreciative of our incredibly generous fans, our peers from around the Texas League and our parent club, the Colorado Rockies for all of their support to help raise much-needed dollars to aid in the recovery process."

Melega said, "Our thoughts are with all those whose lives were affected by the storms."