Drillers Even Series Behind Crawford and Vasquez 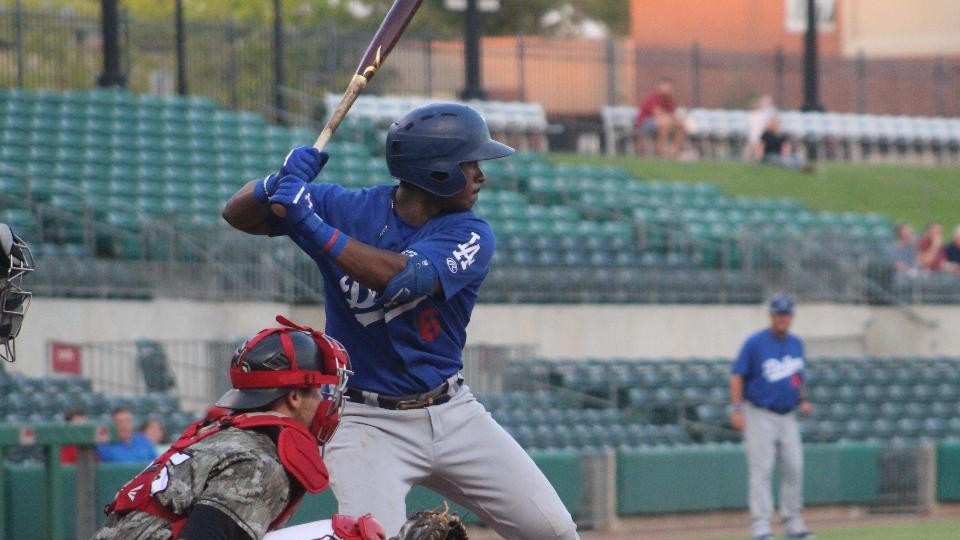 NORTH LITTLE ROCK, AR - The Tulsa Drillers have had very little success against Arkansas this season, but thanks to an impressive pitching display from Leo Crawford and Luis Vasquez on Thursday night, they are now on level terms with the Travelers in the Texas League postseason. Crawford and Vasquez combined to limit the Travs to just 4 hits, none after the fourth inning, and the Drillers offense generated 3 runs off 11 limits in a 3-1 win in at in Game 2 of the North Division Playoff Series. The result evened the best-of-five series at one game each. The setting will now switch to 's ONEOK Field for the remainder of the series, with Game 3 scheduled for Friday night.

After losing the series opener on a late error the previous night, the Drillers entered Thursday's game knowing a victory was vital, and they used an unconventional method to take an early lead.

After a scoreless first inning, tried to steal a run in the top of the second. Connor Wong had led off with a double and later made it to third on a two-out infield single from Donovan Casey. With runners at the corners, the Drillers attempted a double steal that didn't go as planned, but it still worked. When catcher Cal Raleigh threw to second, Casey stopped halfway between first and second and Wong broke for the plate. Shortstop Donnie Walton's throw back home was in time to get Wong, but dropped the ball on the attempted tag. Wong was safe on the error and took a 1-0 lead.

starting pitcher Crawford allowed just one hit through three shutout innings before the Travelers tied the game with a run in the fourth. Highly-touted prospect Jarred Kelenic led off with a single. With one out, hit a potential double-play grounder to third, but Cristian Santana was unable to field it cleanly, putting runners at first and second. Jordan Cowan followed with a base hit that brought Kelenic home with the tying run.

The game turned in the top of the fifth. Jared Walker led off by legging out an infield hit. After stole second base, he moved to third on a ground out. With the infield in, Jeter Downs stroked a base hit up the middle to put the Drillers back in front. The Drillers were not finished though as Chris Parmelee extended the inning by drawing a two-out walk. Wong then beat the Travs' defensive shift by grounding a base hit through the wide open right side of the infield to score Downs and up the lead to 3-1.

The Travelers never really threatened the lead. The RBI hit by Cowan in the fourth would represent their last base runner until the ninth inning as Crawford and reliever Luis Vasquez combined to set down the next 14 batters in order.

The streak ended when Vasquez walked Kyle Lewis with one-out in the bottom of the ninth. The right-hander recovered to get a fielder's choice grounder and a strikeout to end the game and pick up the save for Crawford.

The result represented only Tulsa's 10th win in 32 meetings with Arkansas this season, but in the Texas League's "second season" the two teams are now tied with only three games left to determine the North Division representative in the Championship Series.

WHAT YOU MISSED
*Crawford worked 6.1 innings to get the win. He did not issue a walk and had seven strikeouts. Vasquez did not allow a hit while recording the final eight outs, with five coming on strikeouts.

*Downs enjoyed a big night at the plate for , finishing with three hits, one run scored and one RBI. Wong and Omar Estevez had two hits each.

*After putting runners on base in every inning in their Game 1 victory, the Travelers were finally retired in order by Crawford in the bottom of the second inning. Crawford and Vasquez combined for six 1-2-3 innings on the night.

*The Travelers used defensive shifts throughout the game, and the Drillers used it their advantage. Eight of 's 11 hits were to the opposite field.

*The Drillers will not face an easy situation when the series switches to ONEOK Field for Game 3 Friday night. California League Pitcher of the Year Ian McKinney will take the mound for the Travelers. made three starts for the Travelers in the regular season after a late-season promotion, going 1-0 with a 4.80 ERA.

* may be waiting in the Championship Series for the winner between the Drillers and Travelers. The RockHounds have won the first two games of the South Division Series, both on the road in , and now return home needing just one win in three games to claim the series.