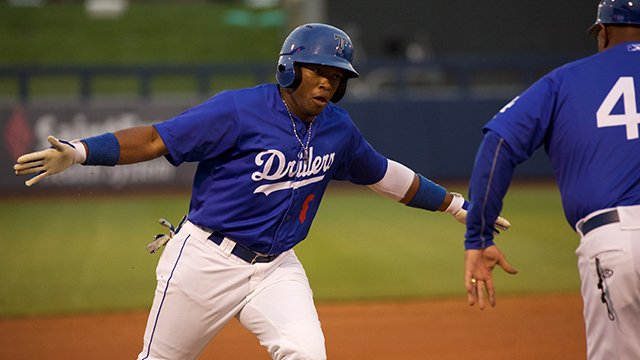 The Tulsa Drillers got a strong outing from Julio Urias Thursday night, but it wasn't enough to secure a win. A costly error in the seventh inning led to a pair of unearned runs for Arkansas, helping the Travelers to a 3-2 win at ONEOK Field.

The loss was the second straight for Tulsa and its sixth in the past seven games. The victory for the Travelers moved them into sole possession of first place in the North Divisions standings.

Urias appeared on the verge of picking up his second win of the season. The lefthander turned in six solid innings, surrendering only one run on four hits and departed the game with a 2-1 lead.

The only run against Urias came quickly. Arkansas leadoff batter, Sherman Johnson, hit the second pitch of the game into the gap in deep, right-center field. On the next offering from Urias, Chad Hinshaw executed a safety squeeze bunt to bring Johnson home and give the Travs a quick 1-0 lead.

Yadir Blake tied the game for Tulsa in the bottom of the second. His solo home run, his second of the season, was a line drive that landed in the Budweiser Terrace in left field.

The Drillers took the lead in the fourth. Brandon Dixon led off with a base hit and stole second base. He eventually came home on a two-out hit by Peter Lavin to put Tulsa in front 2-1.

Matt West, who pitched in three major league games with the Texas Rangers last season, came on for Urias to open the seventh inning. The reliever quickly ran into trouble when he walked the first two batters he faced. A sacrifice bunt moved the runners into scoring position. With Anthony Bemboom at the plate, the Drillers brought the infield in trying to protect their one-run lead. Bemboom hit a sharp grounder just to the left of shortstop Dalvis Morales, who fielded the ball before spinning and throwing home. The throw was wide of the plate and bounded to the backstop, allowing both runners to come home and put the Travelers back in front.

With the one-run lead, Arkansas starter Albert Suarez set the Drillers down in order in the seventh before turning things over to the bullpen. Michael Brady worked a 1-2-3 eighth, and closer Trevor Gott came on for the ninth. Gott who leads the Texas League in saves had to work for his seventh of the season.

Dixon singled with one out in the ninth and again moved into scoring position with a stolen base. After he advanced to third on a ground out, Drake drew a walk and also swiped second. With runners at second and third, Lavin battled Gott in an 11-pitch at-bat before flying out to shallow left-center field to end the game.

Suarez allowed four hits and two runs in seven innings to get the win and improve his record to 2-3.

Each team finished with five hits in the game. Dixon was the only player on either team with more than one hit, finishing 2-4.

The Drillers will look to salvage a split of the four-game series with Arkansas with a win in Friday night's finale. Deck McGuire (4-1, 3.30 ERA) is expected to be activated and make the start for Tulsa. Arkansas has not announced a starter. First pitch at ONEOK Field is scheduled for 7:05PM.