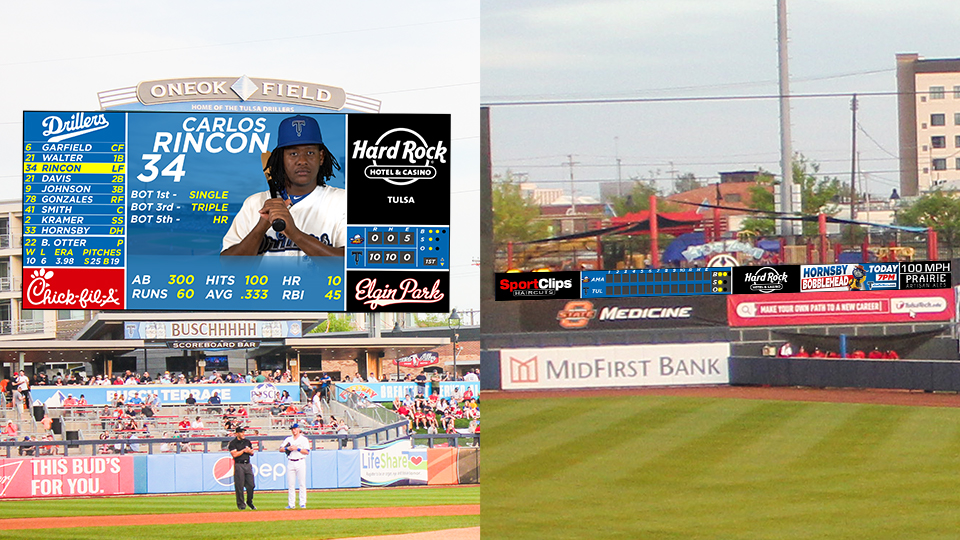 ONEOK Field will receive a major upgrade to its video displays prior to the 2020 season.

TULSA - The Tulsa Drillers announced plans today for a major renovation project to ONEOK Field's scoreboard and video displays. The million-dollar project will replace, enlarge and enhance all the stadium's LED video displays and will be completed prior to the 2020 baseball season.

The highlight of the project will be a new, larger LED video board beyond left-center field that will replace the original scoreboard and video board that have been utilized since the opening of ONEOK Field in 2010.

The entire project will be handled by Fair-Play Corporation. Fair-Play is an industry leader in video displays and its scoreboards have been a standard in sports venues since 1930. This year, Fair-Play opened a state-of-the-art manufacturing facility in St. Louis, Missouri.

The changes will consist of four separate projects. They include:

Main Video Display: A new, HD 31.5 ft. x 67.75 ft. video display will be installed to replace the existing scoreboard and video display. The new LED display will feature state-of-the-art 10mm 1080p LED, offering one of the clearest pictures available. Unlike the old board, the new display will not have a separate matrix scoreboard but will be a complete, uninterrupted LED video board. The total board size will be 43% larger than the previous board, but the actual video display will nearly double in size, going from 1128 square feet up to 2133 square feet, an increase of 89% in active display size.

New LED Linescore/Video Board: To enhance the fan experience at ONEOK Field even further, new 4 ft. x 64.5 ft. 10mm LED video board is being added in right-center field. It will present a line score for games and will also be equipped to present additional game and statistical information that coincides with today's baseball analytics.

Suite Level Ribbon Board: The existing ribbon board on the stadium's suite level will be replaced with a new 10mm display that will match the new, higher-quality presentation on the other boards. ONEOK Field was one of the first minor league stadiums to feature a ribbon board on the second level, and the new display will keep the stadium among the industry leaders for gameday presentation.

"ONEOK Field is one of best and most beautiful ballparks in all of Minor League Baseball, and these upgrades will only make it better by further enhancing the fan experience," said Drillers President Mike Melega. "We excited to partner with Fair-Play to bring the ultimate fan experience to our guests as they watch Drillers Baseball at ONEOK Field."

"We are so proud to serve the Tulsa Drillers organization and the team's great fans by manufacturing and installing the best scoreboards and video displays in the world, especially as we celebrate our 85th year in business," said Fair-Play President and CEO Alberto Shaio.

Construction for the projects is expected to take approximately three months and will begin immediately with the removal of existing equipment.

The Drillers are scheduled to open the 2020 season on April 9 by hosting Frisco.

The Tulsa Drillers play in the historic Texas League of Minor League Baseball and are the Double-A affiliate of the Los Angeles Dodgers. The Drillers franchise was founded in 1977 and moved into ONEOK Field, located in the Greenwood District of downtown Tulsa, in 2010. Since the move, Drillers home attendance has totaled nearly 4 million fans.

Fair-Play is a dedicated 85-year-old manufacturer of sports scoring solutions ranging from fixed-digit displays to indoor and outdoor LED video displays. Products include sports accessories with complete scoring and timing solutions. Fair-Play is a proud partner of professional and minor baseball leagues and sells primarily through its extensive dealer network throughout the world. please visit www.Fair-Play.com.