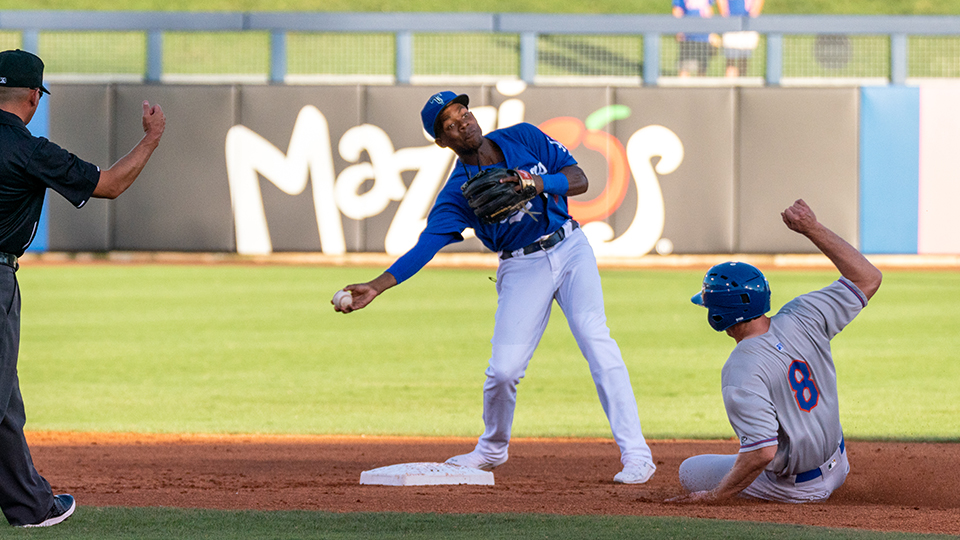 TULSA - Edwin Uceta got the start on the mound for the Tulsa Drillers on Friday night, and he again proved why he is ranked among the Dodgers top prospects. Uceta blanked Midland for six innings, allowing only four hits and only one runner to reach as far as second base. The strong helped the Drillers to a 5-3 victory over the RockHounds at ONEOK Field.

In Uceta's first three starts with the Drillers after a promotion from Single A, he allowed a combined 14 earned runs in 7.1 innings which elevated his ERA to an unattractive 17.18. In six starts since, Uceta has allowed only six earned runs, pitching to a 1.51 ERA over his last 35.2 innings. He picked up his second Double-A win with Friday's performance.

The game was scoreless until the Drillers plated a pair of runs in the bottom of the fourth. Keibert Ruiz singled to start the rally, and Cody Thomas followed with a double to put two runners in scoring position. Connor Wong knocked in the first run of the game with a sacrifice fly, and one pitch later, Errol Robinson hit an RBI single, giving Tulsa a 2-0 lead.

The Drillers doubled the margin an inning later. A single by Drew Avans and an Angelo Mora walk set up another RBI opportunity for Cristian Santana, and he delivered again. On a 2-2 pitch, Santana ripped a double down the left field line, scoring both runners to give the Drillers a 4-0 lead.

Logan Salow took over for Uceta on the mound in the top of the seventh, and it did not take long for Midland to start a rally. After a walk and a single started the inning, Mickey McDonald doubled to knock in a pair. With Chase Calabuig batting, Salow uncorked a wild pitch, allowing McDonald to advance to third. Calabuig then reached on a throwing error by shortstop Zach McKinstry, allowing another run to score and cut the Tulsa lead to 4-3.

Avans gave the Drillers a cushion with an exciting play in the bottom of the seventh. On the first pitch of the inning, Avans hit a ball deep into the right-centerfield gap. RockHounds rightfielder Tayler Motter and centerfielder McDonald were each running for the drive and ended up colliding, allowing the ball to fall. Avans sped all the way around the bases for an inside-the-park home run, giving the Drillers a 5-3 lead. Both outfielders stayed down on the play, but eventually returned to their feet and remained in the game.

The Drillers bullpen took it the rest of the way. Jordan Sheffield recorded the final two outs in the seventh and the first out in the eight before being relieved by Victor Gonzalez. Gonzalez set the next five RockHounds down in order, picking up his second save of the season.

*Omar Estevez was a late scratch from Friday night's starting lineup after suffering a leg injury in Thursday's game.

*After his two doubles on Friday, Santana has continued his tear through the month of July. In 18 games this month, Santana is hitting .387 with 11 extra-base hits while driving in 14 runs.

*Robinson has a modest four-game hitting streak and has hit safely in seven of his last eight games. Over those last eight, he has four multi-hit games and is 11-29 in that stretch.

*Avan's inside-the-park home run was his first homer in a Drillers uniform. He hit four other homers this season while playing for Great Lakes and Rancho Cucamonga, and has 15 total long balls in his two-years as a professional.