Each Thursday, Canadians broadcaster Rob Fai takes a look back at some of the amazing moments in franchise history 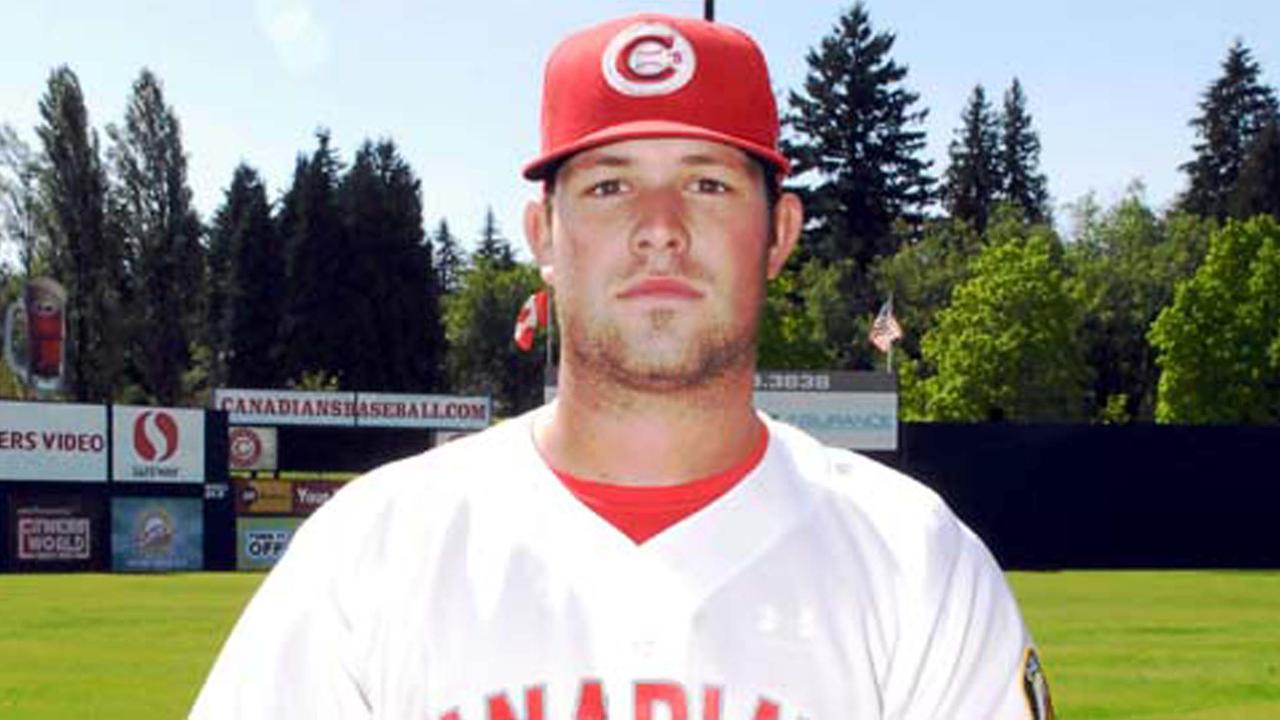 (Vancouver, B.C.) - It had been raining for the better part of the day on a soggy Wednesday afternoon here in Vancouver and yet the Canadians and Spokane Indians still figured to try and get a game in before the rain was set to intensify. Mother Nature caught wind of the optimism and decided to make her presence felt in the top of the 3rd inning sending more and more rain down toward the field where Vancouver had just opened the scoring on a Justin Frash groundout that scored Dan Hamblin who led off with a double and advanced two hitters later on a walk. Semantics aside the C's had grabbed a 1-0 lead for pitcher Brad Hertzler who had retired the first nine batters he faced before heading into the dugout to grab his damp jacket.

Hertzler, a 15th rounder from the University of Maine, was in search of his first win after taking a loss five days earlier in Salem-Keizer despite allowing just a pair of runs. He had breezed through the Indians line-up the first time around and now with a few beads of rain dripping from his cap's bill, was still working with catcher Julio Rivera on lockdown a win before the rain finally made 'The Nat' unplayable. He tossed a three-up, three-down fourth and took to the mound for the 5th inning with the Canadians still up 1-0, and in need of three outs to make the game 'official'.

The rain got even stronger and the two-person umpire crew of Spencer Flynn and Jacob Danielson continued to look at each other wondering if they could sneak this one in. The outcome was largely on Hertlzer who had retired 12 in a row that point. One more quick frame and perhaps that would be enough for the crew to call off the rest of the game. The field had a sheen to it from the precipitation and fans had long tried to move out from the roofless seating and tucked in together underneath the covered sections of the ballpark.

The right-hander delivered a fastball that was hit sharply off the bat of Ian Gac but right to Canadians third baseman Walter Correa who snagged it on a slick hop, firing it across the diamond to a soggy Dan Hamblin.

You could see the track marks from the cleats of Gac shortly after he zipped up the line to try and manage the Indians first hit of the game. The out was Spokane's thirteenth in a row with Hertzler suddenly looking to do something no pitcher in franchise history had ever done.

The next hitter? Victor Barrios, a Venezuelan kid that never got past Single-A after hitting .219 on the season in Spokane. He swung at a change-up that was popped up and into shallow centerfield where future Major Leaguer Corey Brown would be waiting to secure the 14th out of the game.

Two outs, no one on-base and few realized that the next hitter to step into the batter's box would be the final batter of the game. Tim Rodriguez - in his only game played the entire series, got his signs and was ready to challenge Brad Hertzler. Hamblin punched the pocket of his glove over at first base while Walt Correa used the toe of his right cleat to do a little smoothing out of the mud in front of his position. Some think that Rodriguez was the last batter of the game whether he got on-base or not as now the rain was coming down heavy and almost spiteful that the C's and Tribe thought they could outsmart the elements.

After missing with his first two pitches, Hertzler rocked back and offered up a fastball - crack! A high, towering flyball that might have grazed the clouds above began to tumble downward and into the glove of centerfielder Corey Brown.

Not more than a few seconds after the Canadians casually trotted off the field with hardly a reaction - home plate umpire Spencer Flynn turned to the press box and waved his hands. Ballgame.

The Canadians ballpark staff and grounds crew sprinted toward the field tarp and began to unwind it onto the field as fans began to turn for the exits huddled up and ready for the warmth of their cars.

Amid the finality of the afternoon, a few bat boys began to clean-up the Canadians dugout with no sign of celebration.

Moments later in the Vancouver clubhouse, I walked into the room jubilant and excited to have called the first Canadians perfect-game, or at least official no-hitter in franchise history. Marching up to Brad Hertzler, scorecard in-hand I extended my hand to shake his saying 'congratulations!' Hertzler asked 'why?'

He had no idea nor did any of his teammates that over his five innings of work there were no hits, no walks, no errors, and no runner's left on-base. It was almost as if the chill of dampness had completely distracted the players from the achievement.

Canadians manager Rick Magnante in the next room smirked as he said to pitching coach Jimmy Escalante 'Did you know?' to which Escalante said he 'thought so but wasn't sure.'

The single most noted achievement in any pitcher's career - and the only no-no Brad Hertzler would ever record in professional baseball was a rain-shortened no-hitter that no one even noticed.

It was as if because it was a rain-shortened effort that it was sorta, kinda a no-hitter although the Northwest League record books will disagree listing his five innings of perfection equal to any others thrown over the years.

Vancouver would win the game 1-0 and get right back on the field a day later facing Derek Holland (yes, that Derek Holland) falling 6-2 in a game that saw the future Major League ace go five innings of two-hit baseball striking out seven Canadians.

But he didn't throw a no-hitter.