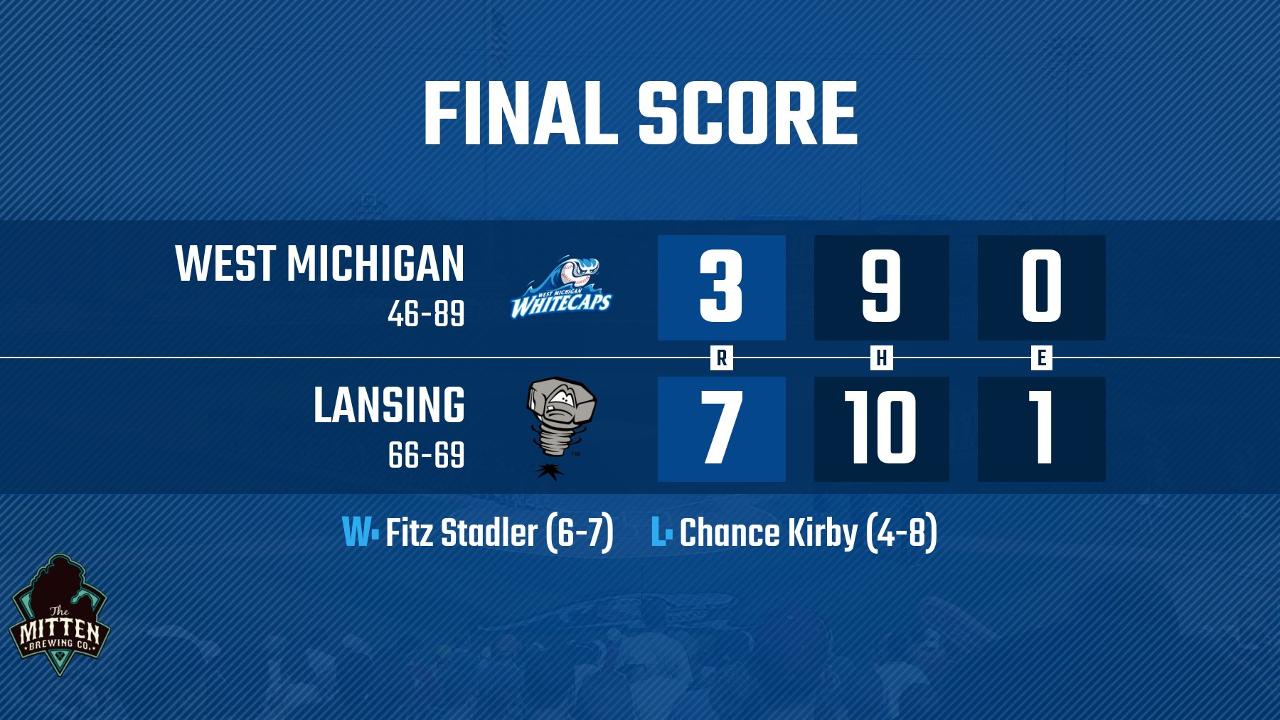 LANSING, MI - The West Michigan Whitecaps gave up four home runs in the first five innings in a 7-3 loss to the Lansing Lugnuts Thursday night at Cooley Law School Stadium.

The four home runs tied a franchise record for homers in a single game, with the last instance coming on August 4, 2017, at Fort Wayne. The loss extends West Michigan's losing streak to four games.

The Lugnuts controlled the game nearly from the start as L.J. Talley launched his sixth home run of the season - a two-run shot - as Lansing grabbed a 2-0 lead. Johnny Aiello extended the advantage by blasting his eighth homer of the year to bring the score to 3-0 after two frames. An RBI-groundout by Sam McMillan gave the 'Caps their only run in the third before the Lugnuts responded with a solo homer by Rafael Lantigua. In the fifth, the Lugnuts scored three more times as starter Chance Kirby gave up his fourth home run of the contest. Conine blasted a two-run shot to Griffin Conine for his 20th home run of the year to extend the Lansing lead to 7-1. Meanwhile, Lugnuts starting pitcher Fitz Stadler cruised through six innings of one-run baseball while keeping the 'Caps off-balance and keeping the ball down in the strike zone. The Whitecaps scored two in an eighth-inning highlighted by a Parker Meadows RBI-single, but it was too-little, too-late as West Michigan lost its fourth straight game.

Stadler (6-7) closes his season with his sixth victory, while Kirby (4-8) finished the contest giving up seven Lugnuts runs on eight hits and striking out six in his eighth loss of the year. West Michigan slips to 46-89 overall in 2019 and 25-41 in the Midwest League's second-half standings. Lansing improved to 66-69 and 34-32 in the back half of the 2019 season. Shortstop Wenceel Perez enjoyed a three-hit performance for the fourth time this season, going 3-for-4 with a double in a losing effort.

The Whitecaps conclude this three-game series against the Lansing Lugnuts from Cooley Law School Stadium on Friday at 7:05 pm. Maddux Conger starts for West Michigan against Lansing righty Troy Watson. Broadcast coverage with Dan Hasty begins on the Whitecaps Baseball Network at 6:55 pm. Tickets are available for any Whitecaps 2020 home contest by calling the Whitecaps front office at 616-784-4131 or by visiting www.whitecapsbaseball.com.