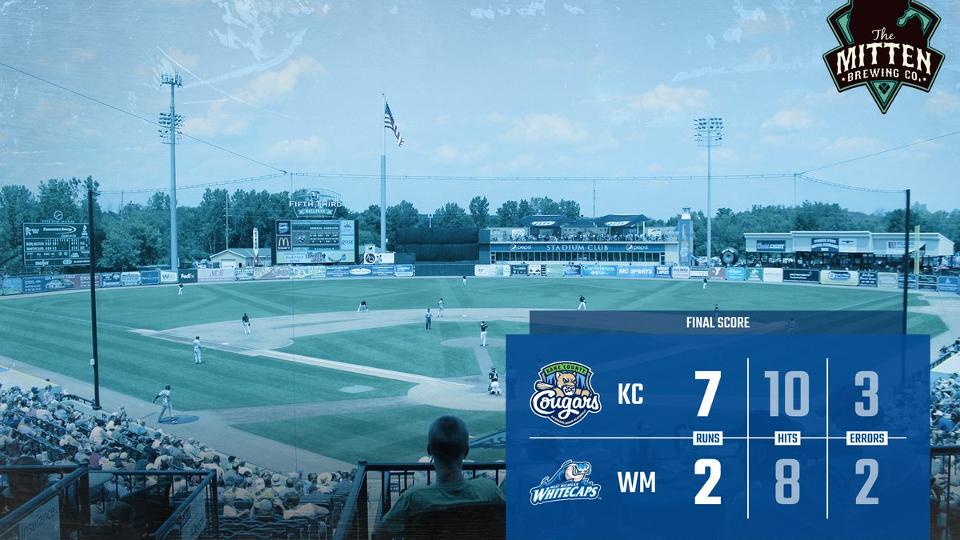 Tweet from @wmwhitecaps: This game was closer than the @MittenBrewingCo Final Score makes it seem. But either way, we'll be back tomorrow to do it one more time! pic.twitter.com/Dj5bj7GPTT

Smith gave up only three singles and two walks while shutting out Kane County in six innings of work to put himself in position for a possible win, but the Whitecaps bullpen allowed four runs in the seventh inning and three more in the ninth for a disappointing ending.

In a game that went scoreless through the first five innings, the 'Caps managed five singles and a walk against Cougars starter Jackson Goddard but stranded six on the basepaths. In the sixth inning, Dayton Dugas singled, and Nick Quintana reached on a throwing error before Zach Malis followed with a ground out which scored Dugas and gave the 'Caps a 1-0 edge. Kane County came right back to take the lead at 4-1 by pouncing on Whitecaps reliever Jose Vasquez for three hits, a walk and a Nick Quintana fielding error in the seventh inning. All four runs in the frame were unearned. The Whitecaps closed the gap to 4-2 after Chris Proctor plated Wenceel Perez, who singled to start the seventh. A three-run ninth inning for Kane County ultimately put the game out of reach as two walks, a single and a Jack Kenley fielding error all contributed to a 7-2 deficit. The Whitecaps went down in order in the ninth inning as the loss evened the series at a game each.

Vasquez (1-4) took the defeat, allowing four runs, all unearned and four hits while walking one. The 'Caps Yaya Chentouf and Liarvis Brieto combined to pitch 2.1 innings, allowing three hits, three walks, and two earned runs. Goddard (5-3) pitched well, going a season-high six innings, scattering six hits with the lone run unearned. Blake Workman picked up his ninth save of 2019 for Kane County. Proctor and Rey Rivera each had two hits of the eight overall for West Michigan, but the team left ten on the base paths and batted one for ten with runners in scoring position. Dugas and Andre Lipcius both extended hitting streaks to six games for West Michigan. The Whitecaps fall to 30-62 and 9-14 in the second half standings while Kane County improves to 50-42 and 15-8.

The Whitecaps finish their six-game homestand against the Kane County Cougars Monday night from Fifth Third Ballpark at 7:05 pm. Pitcher Brad Bass starts for West Michigan against Cougars righty Matt Tabor. Broadcast coverage with Dan Hasty and Nate Wangler begins on the Whitecaps Baseball Network at 6:55 pm. Tickets are available for any Whitecaps 2019 home contest by calling the Whitecaps front office at 616-784-4131 or by visiting www.whitecapsbaseball.com.