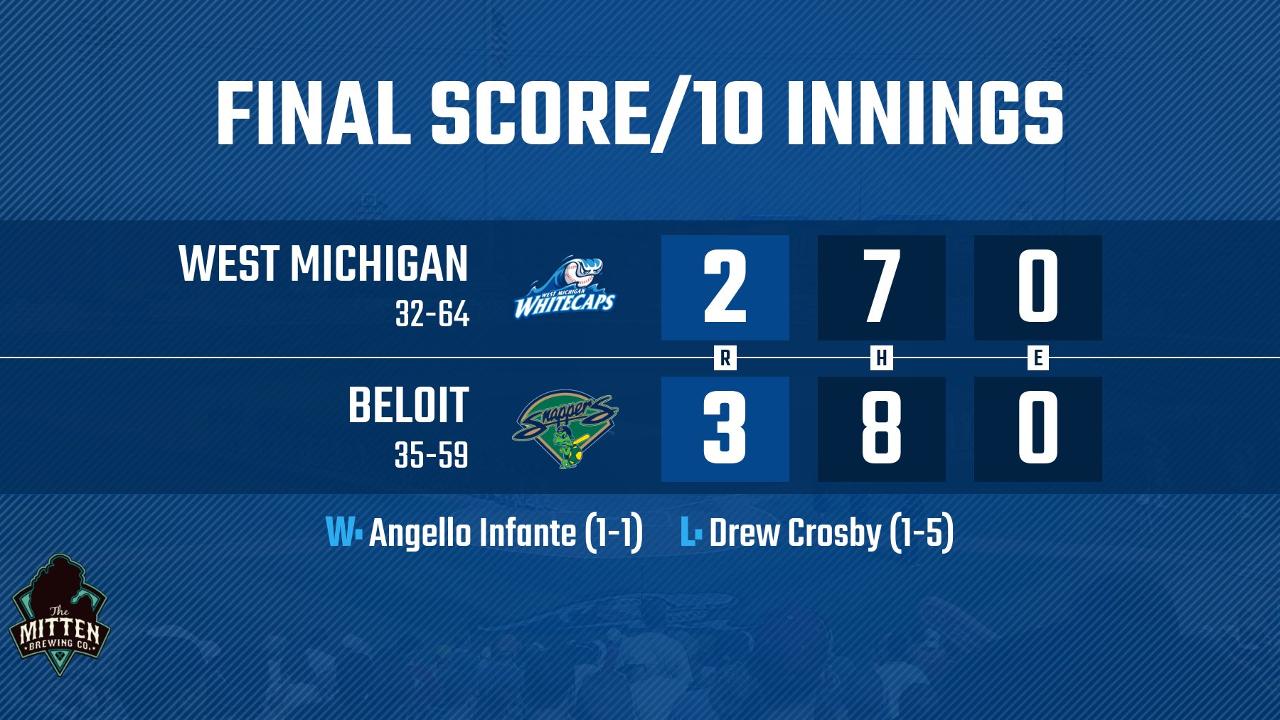 BELOIT, WI - The West Michigan Whitecaps showed the late-inning fight they've lacked this season but came up short in a 3-2, ten-inning loss to the Beloit Snappers Friday night at Pohlman Field.

Tweet from @ThatDanHasty: Outcome wasn���t what the @wmwhitecaps wanted tonight, but proud of the fight they showed. You���d be amazed how many people made the trip from West Michigan to Beloit. Felt like a home game. Ahead to Appleton. 🚎

Tweet from @wmwhitecaps: Came up with some clutch hits tonight, but couldn't get over the hump in a 3-2, 10-inning loss. Still took 2-of-3 in Beloit. We're off to Appleton to face the Wisconsin Timber Rattlers Saturday at 7:35pm on @TheTicketMI, presented by @MittenBrewingCo. pic.twitter.com/XSMrxU4FtJ

Snappers outfielder Nick Osborne opened the scoring with a solo home run in the second inning - his fourth of the season - to give Beloit a 1-0 lead. In the fourth, Beloit's Logan Farrar beat out a potential inning-ending double-play ball to score a run and extend the Snappers advantage to 2-0. In the seventh, a two-out double by Nick Quintana extended the inning for Chris Proctor, who delivered a run-scoring single to bring the Whitecaps within a run at 2-1. With the 'Caps down to their final strike in the ninth, Quintana plated Andre Lipcius with a game-tying RBI-single - his third hit - to tie the game 2-2.

In the tenth, West Michigan missed a chance to take the lead before Vance led off the bottom of the frame with his game-winning single to help Beloit avoid a three-game sweep.

Snappers pitcher Angello Infante (1-1) allowed two runs in five innings in collecting his first Midwest League win, while 'Caps reliever Drew Crosby (1-5) lasted three innings and allowed an unearned run in suffering his fifth loss of the season. The 'Caps record drops to 32-64 overall and 11-16 in the second half standings while Beloit escapes a sweep and improves to 35-59 and 8-18 in the back half of 2019. Quintana led the 'Caps with three hits, while Lipcius went 2-for-5 with a double, extending his hitting streak to ten games.

The Whitecaps continue this six-game road trip as they travel to Appleton to face the Wisconsin Timber Rattlers for a three-game series beginning Saturday night at 7:05 pm. Righty Gio Arriera starts for West Michigan against the Timber Rattlers Scotty Sunitsch. Broadcast coverage with Dan Hasty begins on the Whitecaps Baseball Network at 7:20 pm. Tickets are available for any Whitecaps 2019 home contest by calling the Whitecaps front office at 616-784-4131 or by visiting www.whitecapsbaseball.com.