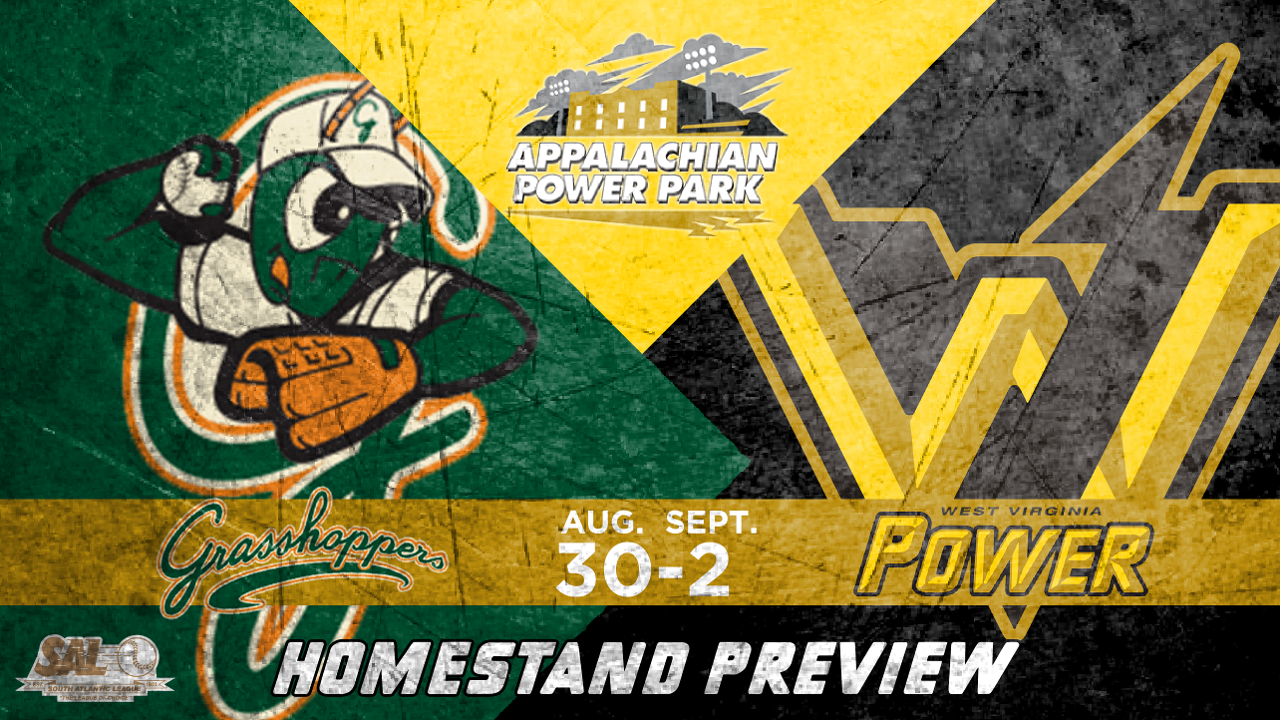 The West Virginia Power takes on the Greensboro Grasshoppers for their final series of 2019. (Kyle Youmans)

CHARLESTON, W. Va. (August 29, 2019) - The West Virginia Power opens up their final homestand Friday evening, a four-game home series, as they welcome the Greensboro Grasshoppers to town from August 30-September 2. Fans will enjoy a weekend home slate that includes Deaf Awareness Night, presented by the West Virginia Commission for the Deaf and Hard of Hearing, and a postgame fireworks show, sponsored by Encova Insurance, on Friday, as well as a celebrity appearance from Bachelorette star, Luke Pell, on Saturday, August 31.

ABOUT THE GRASSHOPPERS: The Grasshoppers (33-31, 77-56) are on the brink of playoff elimination as they enter Thursday' play, with Hickory's magic number whittled to one as they play their series finale against the Columbia Fireflies. Despite their season most likely ending on Monday in West Virginia, Greensboro still holds quite a few distinctions in the league, as they are among the top two teams in homers (120), runs (683), RBI (611), walks (490) and stolen bases (148). A former Grasshopper, Mason Martin, earned a well-deserved honor earlier this week, as the SAL awarded him the Annual-All Star selection at first base. Amongst the current squad, reigning SAL Player of the Week Ji-Hwan Bae paces the club with a .324 average to go along with 35 RBI in 83 games played. Meanwhile, the Grasshoppers possess one of the most lethal closers in the league in Yerry De Los Santos, who has a 1.47 ERA in 36 games and has converted all 12 of his save opportunities. The Power are 4-13 against the Grasshoppers this season, and, with one more loss, would suffer the most losses they have against Greensboro in a single season in series history.

DEAF AWARENESS NIGHT: The Power kicks off their final homestand with a very special night, as the team will welcome members of the Deaf and Hard of Hearing community to Appalachian Power Park on Deaf Awareness Night, presented by the West Virginia Commission for the Deaf and Hard of Hearing. The team will wear special American Sign Language-styled jerseys during the game, which will be auctioned off on the LiveSource app throughout the night. We will also have interpreters at the ballpark. Additionally, the final postgame fireworks show of 2019 follows the final out, courtesy of Encova Insurance and Suddenlink. Gates open at 6 p.m., and first pitch is set for 7:05 p.m.

LUKE PELL APPEARANCE: Bachelorette star, Luke Pell, will make a special celebrity appearance, sponsored by WCHS-TV, at Appalachian Power Park on Saturday, August 31. Pell will host a special pregame Meet and Greet before the game for fans to meet and take pictures with him at the ballpark. Ticket packages for this special celebrity appearance are on sale for $30.00 online only. The package includes access to the pregame Meet and Greet and a photo opportunity with Pell, a glass of wine for those of legal drinking age, a rose and a box seat to Saturday's game. Gates open at 4:30 p.m., and all fans can enjoy a pregame concert by Zachary Sovine from 4:30 to 5:30 p.m. on the GetGoWV stage, as well as Happy Hour specials at the Budweiser Dugout Bar. Also, Emmalea Deal returns to the ballpark to close out our Summer Series with a postgame concert Saturday night! First pitch is on the docket for 6:05 p.m

MYSTERY BALL: Saturday will also feature the Power's Mystery Ball sale, where fans can purchase a baseball signed by a random current or former MLB or MiLB player for just $10 per bag on the concourse during Saturday's game. Be sure to grab yours early, as these items will be gone fast.

KIDZ SUNDAY FUNDAY: The homestand continues with a Kidz Sunday Funday, where kids ages 12 and younger can run the bases after the final out, courtesy of the SMART529 College Savings Program, as well as play catch in the outfield before the game. Select Power players will also be available for postgame autographs. Also, if you are a member of the Sheetz Power Kidz Club, you can receive free tickets to Sunday's home game against Greensboro from Sheetz. Kidz Sunday Funday is presented by the Shawnee Park Foundation. Gates open at 1 p.m. and first pitch is on tap for 2:05 p.m.

LABOR DAY: Celebrate the end of the regular season at Appalachian Power Park with a matinee affair at 2:05 p.m. as the Power clashes with the Greensboro Grasshoppers. It is also the final Family Buck Day of the year, as the best deal your family can get is back for one final afternoon! Get box seats for $3.00 or general admission tickets for just $1.00, and enjoy hot dogs, popcorn and 12-ounce Pepsi beverages all for $1.00 each. Gates open at 1 p.m. for the final Power home game of 2019!