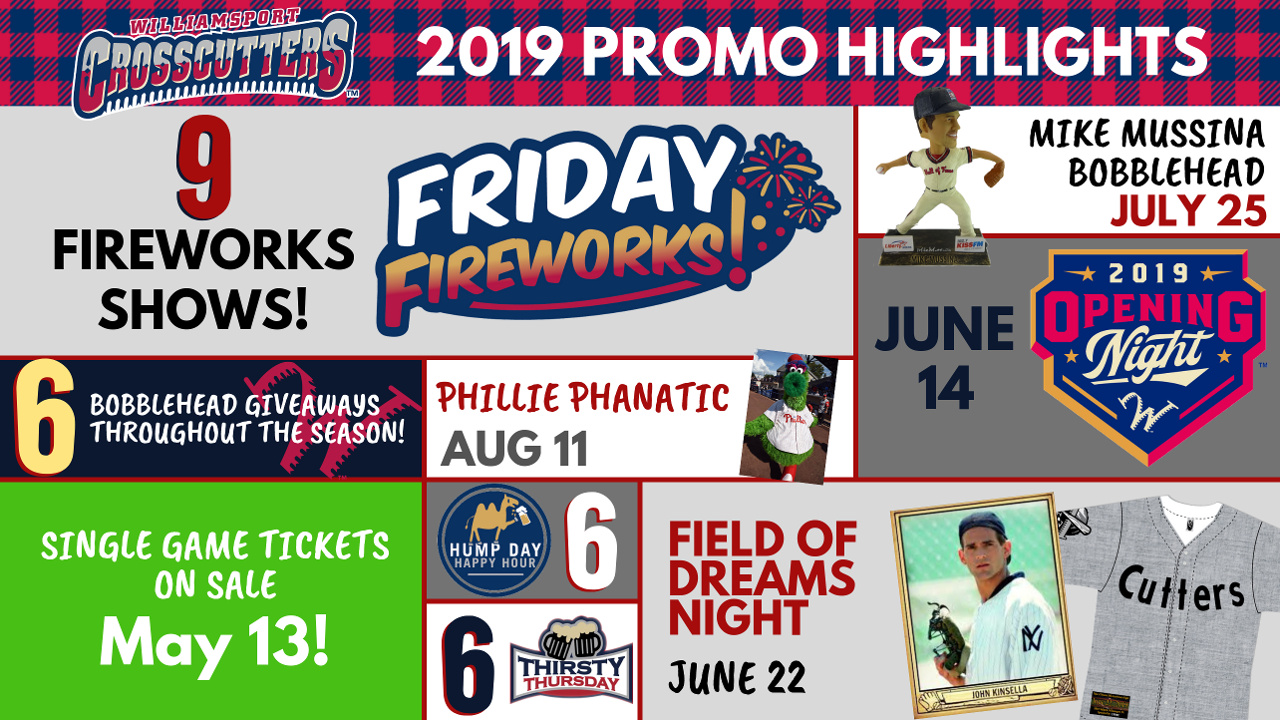 The Williamsport Crosscutters have released their full promotional schedule in advance of the 2019 season, presented by UPMC, which opens on June 14.

One major highlight of the promotional slate is the Local Legends Bobblehead Series that features a record six bobbleheads that fans can collect. "In addition to the bobbleheads being given away, many of the local legends being honored will be at the ballpark on their night meeting fans and signing autographs, which will make it extra special," stated Gabe Sinicropi, the Williamsport Crosscutters Vice President of Marketing and Public Relations.

Fans can collect the Local Legends Bobblehead Series on the following dates;

June 16 - 2018 World Series MVP Steve Pearce , who began his career with the Williamsport Crosscutters in 2005. He will be depicted in his Crosscutters uniform from '05.

July 6 - Indiana Pacers forward Alize Johnson, who will be featured in his high school uniform. Johnson, a native of Williamsport, played high school basketball for St. John Neumann Regional Academy and will be on hand to meet fans and sign autographs.

July 25 - 2019 Baseball Hall of Fame Inductee Mike Mussina. The Cutters will honor this Montoursville native with a bobblehead giveaway featuring a special Hall of Fame uniform. In addition, Mussina will be at the ballpark meeting fans and participating in a special charity autograph signing.

August 4 - Cutters Director of Smiles Rhashan! Talking Bobblehead. This popular annual bobblehead giveaway will feature Rhashan singing "Take Me Out to the Ballgame". It marks the Cutters first-ever talking bobblehead giveaway. As always, Rhashan will spend the evening meeting fans and signing autographs.

Each bobblehead giveaway will be limited to the first 1,000 fans in attendance. Due to the expected popularity of these giveaways, the Cutters will be offering a limited number of special Guaranteed Bobblehead Packages for each of the giveaways along with an opportunity to be part of a special charity autograph signing with Hall of Famer Mike Mussina. Those packages are expected to be released in the coming days on crosscutters.com.

In addition to bobbleheads, fans will also be treated to a number of other giveaways including; Knoebels Bargain Night tickets on June 18, a Rhys Hoskins Puzzle giveaway on July 23, Team Card Sets on August 7, Pin Giveaways on August 21 & 24 and a Boomer Bank giveaway on August 29.

Weekly Promotions also return, providing events and savings fans can count on week after week throughout the season;

Mondays
Military Monday. All active and retired military personnel get a free admission ticket when they show their military ID at the box office.

Tuesdays
BOGO Ticket Tuesday. Show your Giant Bonus Card at the box office for buy one get one free Stadium Reserved tickets
Two-for-Tuesday. Fans can enjoy 2-for-1 soft drinks during the game.
Charitable Tuesdays. A different local non-profit is featured at the ballpark every Tuesday

Wednesdays
Kids Eat Free. The first 100 fans age 12 and under get a free meal coupon.
Hump Day Happy Hour- $2 domestic pints and $1 off all craft beer pints until 7pm.

Thursdays
Thirsty Thursday.  $2 domestic pints and $1 off all craft beer pints.
Launch-a-Ball.  A chance to win great prizes after the game
MedReturn. Turn in your unused or expired medications for safe disposal and get a free hot dog & soda.

Saturdays
Launch-a-Ball.  A chance to win great prizes after the game.

Sundays
Baseball Bingo.  All fans age 18 and over can play for a chance to win great prizes.
Kids Day - Stadium Reserved tickets are just $1 for all kids age 12 and under. After the game, all kids can come on the field and run the bases in "Boomer's Mad Dash".