Fassnacht Walks it Off in the 10th 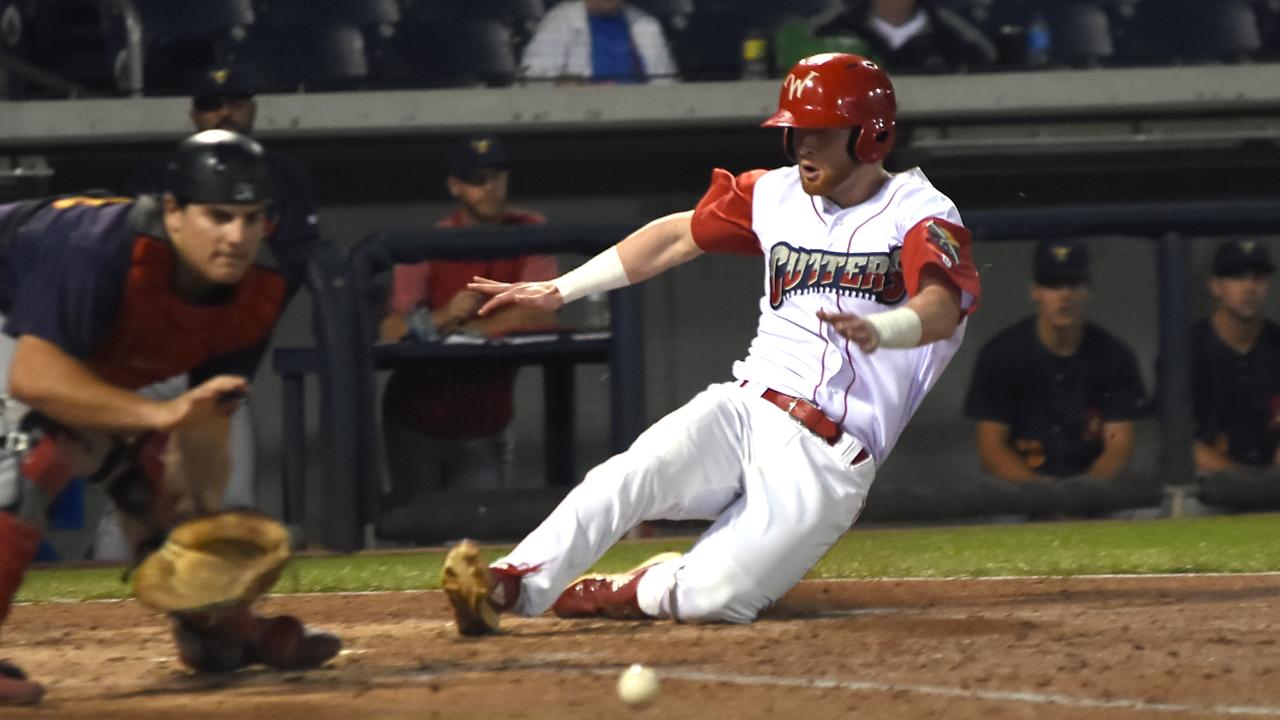 Williamsport, Penn. - Nate Fassnacht laced a double down the left-field line in the bottom of the tenth to bring in Nicolas Torres racing around from second base in a 3-2 victory over the State College Spikes on Saturday night. Williamsport (32-42) improved to 3-2 in extra innings and stands at 6-3 in its last nine. The setback officially eliminated State College (38-36) from postseason contention.

Fassnacht also had an RBI single in the second on a 2-for-4 game with two RBI.

Anton Kuznetsov picked up the win in relief with three innings allowing two unearned runs in the eighth on a pair of dropped fly balls. Chris Micheles pitched well in middle relief lasting 3.2 innings allowing no runs and just four hits, only one of which was hit hard. Starter Adam Leverett went 3.1 innings with four strikeouts giving up two hits and two walks.

Hunter Hearn doubled against Andre Pallante to lead off the Cutters' half of the second inning. Joan Rojas beat out an infield single and raced up to second on a stolen base attempt but Hearn was thrown out trying to take home after the Spikes threw to second and back to the plate. Fassnacht knocked a single to right to bring home Rojas for a 1-0 lead.

Adam Leverett worked out of a second-and-third jam in the third with a strike out of big Terry Fuller. And ten Chris Micheles relieved Leverett in the fourth and left the bases loaded with back-to-back strikeouts of Dinivan Williams and Shane Benes in a nice bounce-back effort.

A couple more reached in the fifth on a pair of weakly hit singles but Micheles pushed through again with a pop-out of Mat Duce.

The Cutters stretched their lead in the sixth with Jake Holmes battling his way on base via a walk against difficult lefty Jacob Schlesner who racked up seven strikeouts. Holmes broke for second when Schlesner was throwing a pick-off throw to first but the Spikes hurler also fooled his own first baseman who had vacated the bag allowing the throw to sail into right field. Holmes came racing all the way around to score on the error for a 2-0 lead.

Anton Kuzntesov was touched for a pair of unearned runs on dropped fly ball by Hunter Hearn in left and Johan Rojas in center in a bizarre inning. But Kuznetsov stayed steady and worked three hitless innings including the top of the tenth to keep the game tied.

Nicolas Torres entered the game as a pinch-runner in the top of the tenth as the lead-runner under the tie-breaker rules and got to score the winning run on Fassnacht's hard-hit ball barely fair down the left-field line.

The Cutters are 22-15 in the second half of the season with just two games to play. Williamsport was 10-27 in the first half of the year.

The last road game of the season is Sunday at 6:05 p.m. at State College with LHP Junior Tejada scheduled to start. The Cutters play their season finale on Monday afternoon at 1:05 p.m. at BB&T Ballpark with RHP Leonel Aponte throwing the first pitch on Fan Appreciation Day.

- Kendall Simmons is second in the league in home runs (12) trailing Ezequiel Duran of the sTaten Island Yankees who has 13.

- The Crosscutters rate third in the NYPL in ERA at 3.02.

- The Crosscutters are second in the league in stolen bases with 108.