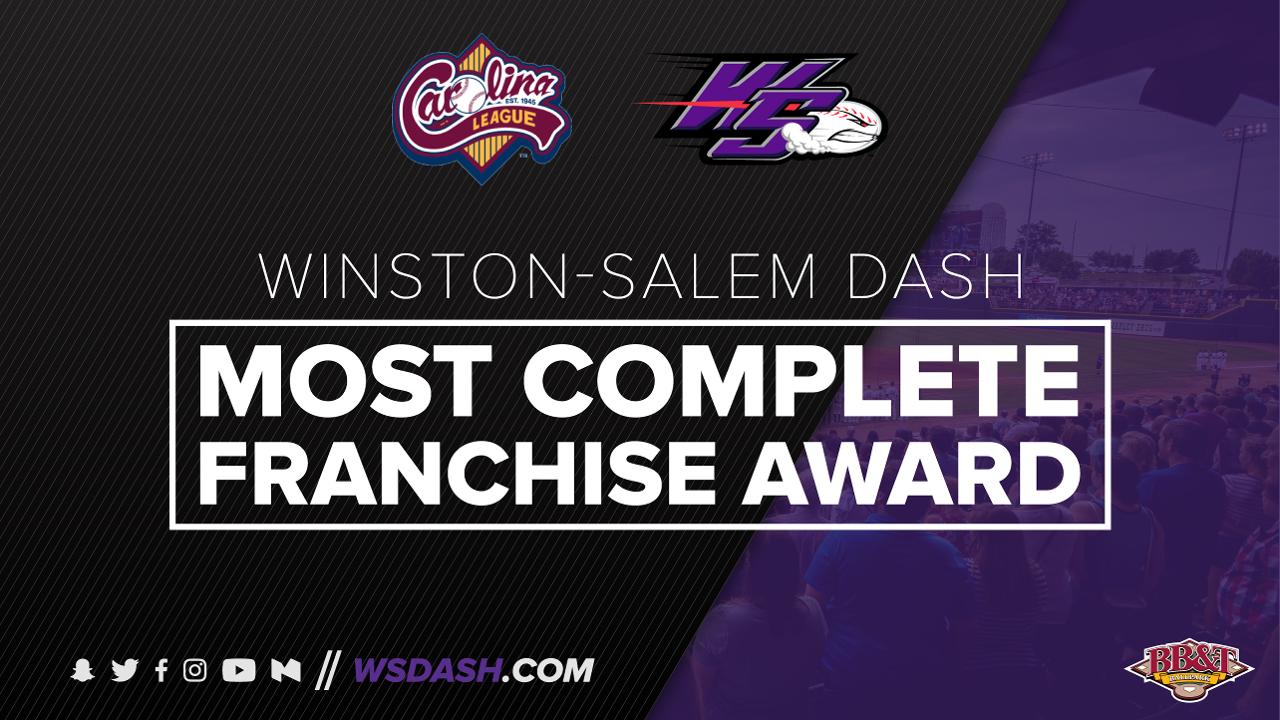 WINSTON-SALEM, N.C. (Oct. 14, 2019) - For the third time in five years, the Carolina League has nominated the Winston-Salem Dash for the John H. Johnson President's Award, the top honor in Minor League Baseball. The Johnson Award recognizes a "complete" franchise that demonstrates stability and contributes to its community, its league and the baseball industry as a whole.

For the fifth time in BB&T Ballpark's 10-year history, Winston-Salem paced all 30 Class A-Advanced teams in total attendance. The Dash welcomed 264,879 total fans to BB&T Ballpark this season, and the team had 13 games of 5,500 fans or more. A crowd of 8,825 fans, the third-largest crowd in BB&T Ballpark history, came out on Independence Day to watch the Dash play the Fayetteville Woodpeckers.

The Dash's footprint in the industry did not end with the Carolina League schedule. Over the last year, the team and BB&T Ballpark have hosted over 200 non-gameday events, including a community party at the ballpark after the closure of Business 40, a Hot Stove Banquet with former American League Rookie of the Year Ron Kittle and a "Dash City Rocks!" concert that featured popular acts Sister Hazel, Vertical Horizon and Emerson Hart (lead singer of the group Tonic).

On social media, the Dash were one of the most interactive teams at the High-A level, finishing in the top 10 in almost every major category. On Facebook, the Dash finished in the top 10 in most interactions per post (4th, 113 per post), most video views (3rd, 449,661) and total audience growth (7th, 1743). On Twitter, Winston-Salem finished third in interactions per post (30) and fourth in followers added (2,011). On Instagram, the team has doubled its followership over the last two years.

"There are ten great organizations across the Carolina League providing quality family-friendly entertainment for their communities. We are honored to be recognized by our peers for having sustained success. This nomination is a testament to the hard work and passion of our staff," said Winston-Salem Dash Team President C.J. Johnson.

Minor League Baseball will select the winner of the Johnson Award, and that team will be honored at the Baseball Winter Meetings in San Diego, Calif., this December. Winston-Salem is trying to become the third Carolina League club to win this award and the first since Lynchburg in 1998.

Once again this season, the Dash had some big-time prospects on their roster. To start 2019, Winston-Salem sported two top-50 prospects per MLB Pipeline in outfielder Luis Robert and infielder Nick Madrigal. Robert and Madrigal both finished the year with Triple-A Charlotte, and Robert was named MLB Pipeline's Player of the Year. Meanwhile, nine of the White Sox top 30 prospects per MLB Pipeline suited up in the Dash purple. At the helm was Dash manager Justin Jirschele, the youngest manager in full-season Minor League Baseball. In his first season leading the Dash, Jirschele guided Winston-Salem to the third-best overall record in the circuit.

Season-ticket and group packages for the 2020 season are on sale now. Call (336) 714-2287 to secure your seats for the biggest games of the Dash's home slate. For more information, visit wsdash.com.