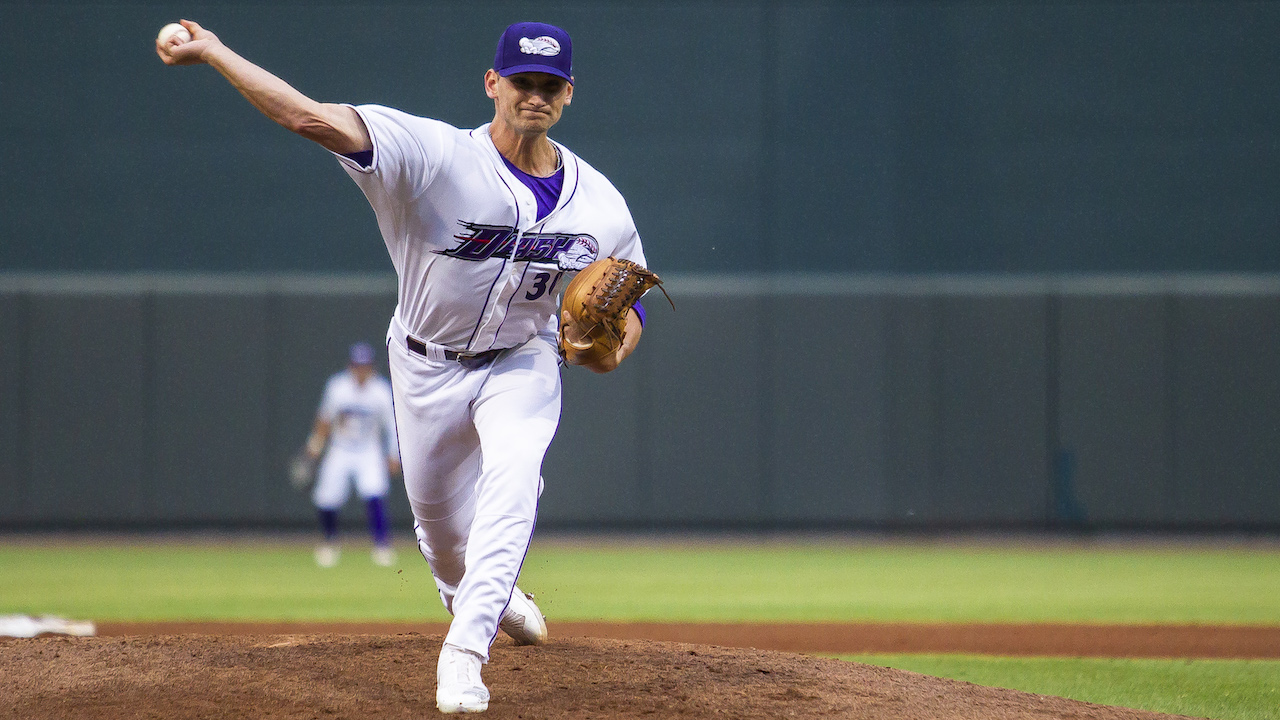 Lewis earned his sixth win of the season on Tuesday. (Scott Kinser)

LYNCHBURG, Va. (Aug. 20, 2019) - Thanks to a quality start from Zach Lewis and three strong innings from the bullpen, the Dash secured a 5-2 win in the series opener on Tuesday night at City Stadium. With the victory, Winston-Salem (28-28, 66-54) has now won six out of its last seven contests, and the Dash now trail the Fayetteville Woodpeckers 2.5 games for the second-half Southern Division wild card spot with 13 games to go.

Lewis (6-6), who was making his 16th start of the year, tossed six innings, allowing four hits and two unearned runs while walking one and striking out six. It marked the right-hander's first victory since July 2 at Down East.

Meanwhile, Andrew Perez relieved Lewis and worked around a first and second jam to post a scoreless frame in the seventh. Wyatt Burns closed out the ballgame by posting two scoreless innings to earn his third High-A save in four opportunities.

After Lynchburg (25-30, 57-65) broke a scoreless tie in the second on an RBI groundout from Jonathan Laureano, the Dash took the lead in the third against Juan Mota (2-3). Evan Skoug drew a one-out walk, and Tate Blackman followed by reaching on a throwing error from the Hillcats third baseman Laureano.

Following a walk to Steele Walker to load the bases, Tyler Frost lofted a sacrifice fly to left. On the play, Jodd Carter's throw hit Skoug on his way home, and the ball trickled towards the backstop, allowing Blackman to score on the play as well to put the Dash on top 2-1.

The Dash added on another run in the fifth with the help of an error. Blackman was hit by a pitch to start the frame. Then, Walker got on base by reaching on a fielding error by second baseman Connor Smith on a groundball. After a fielder's choice by Frost, Andrew Vaughn recorded his 15th RBI of the season by driving in Blackman on a groundout.

Winston-Salem plated its final runs in the sixth on an RBI single from Skoug and a sacrifice fly from Frost.

The Dash continue their three-game set against the Hillcats on Wednesday at 6:30 p.m. Winston-Salem sends right-hander Jorgan Cavanerio (8-2, 3.00 ERA) to the hill against Hillcats southpaw Juan Hillman (4-12, 4.23 ERA). Pregame coverage begins at 6:15 p.m., and fans catch all of the action on wsdash.com/broadcast and the TuneIn Radio App.

Following the road trip, the Dash host the Salem Red Sox for the final four home games of the season from August 26-29. The series begins with a 7 p.m. game on Monday, August 26. Tuesday's game will be the first-ever 336 Counts Community Day, with first pitch a 3:36 p.m., free parking and discounted food and beer prices.

The series with Salem continues with Winston Wednesday, with $10 presale tickets and the Dash wearing their retro Warthogs jerseys. Thursday, August 29, will be the final regular season home game of the 2019 season. The home finale is a Lowes Foods Thirsty Thursday and a Pups in the Park Night presented by Handy and Handy Orthodontics. Additionally, there will be a Food Truck Festival prior to the game. For tickets and more information, call the Dash at (336) 714-2287 or visit wsdash.com.